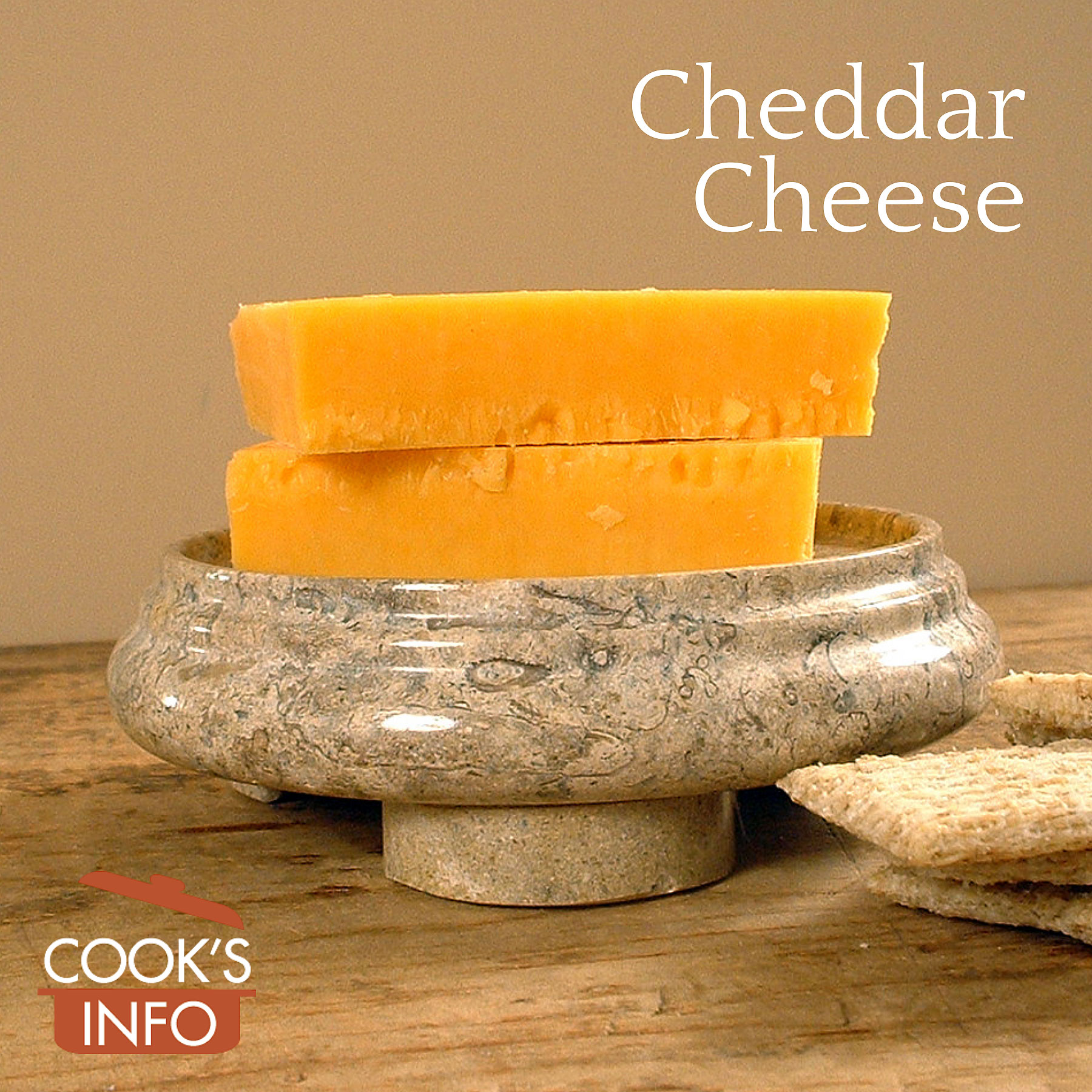 There are entire books and articles dedicated to Cheddar cheese, so loved is it throughout the English-speaking world. It originated in Cheddar, Somerset.

There are many varieties of Cheddar, and anyone can make it.

Even when England was part of the EU, the name “Cheddar” was not a protected EU designation name: “Protection of the name ‘Cheddar’ is not sought” (EU COMMISSION REGULATION (EC) No 1107/96.) As of 1996, one particular variety, though, had an EU protected designation (West Country Farmhouse Cheddar Cheese – PDO.)

The only cheese-maker maker actually in Cheddar, Somerset is the Cheddar Gorge Cheese Company, founded in 2003 (extant as of 2020.) They make their cheddar using raw milk from local cows. The cheese is aged in rounds wrapped in linen to allow it to breathe as it ages for up to a year.

How Cheddar cheese is made

Methods of making Cheddar will vary by cheesemaker, but here in broad strokes is the general process.

A bacterial starter culture is added to heated milk. The starter is allowed to percolate for about an hour, then rennet is added to curdle the milk. When curds have formed, the liquid whey is drained off, then the curds are cut, stacked and heated to encourage more whey to drain out. The curd is then turned over, cut into slabs, let stand overnight with a weight on them, then let stand to finish draining, about 4 days.

The cheese is then aged to develop varying degrees of sharpness of taste.

The “cheddaring process” is the part where the curd is cut, turned and stacked. 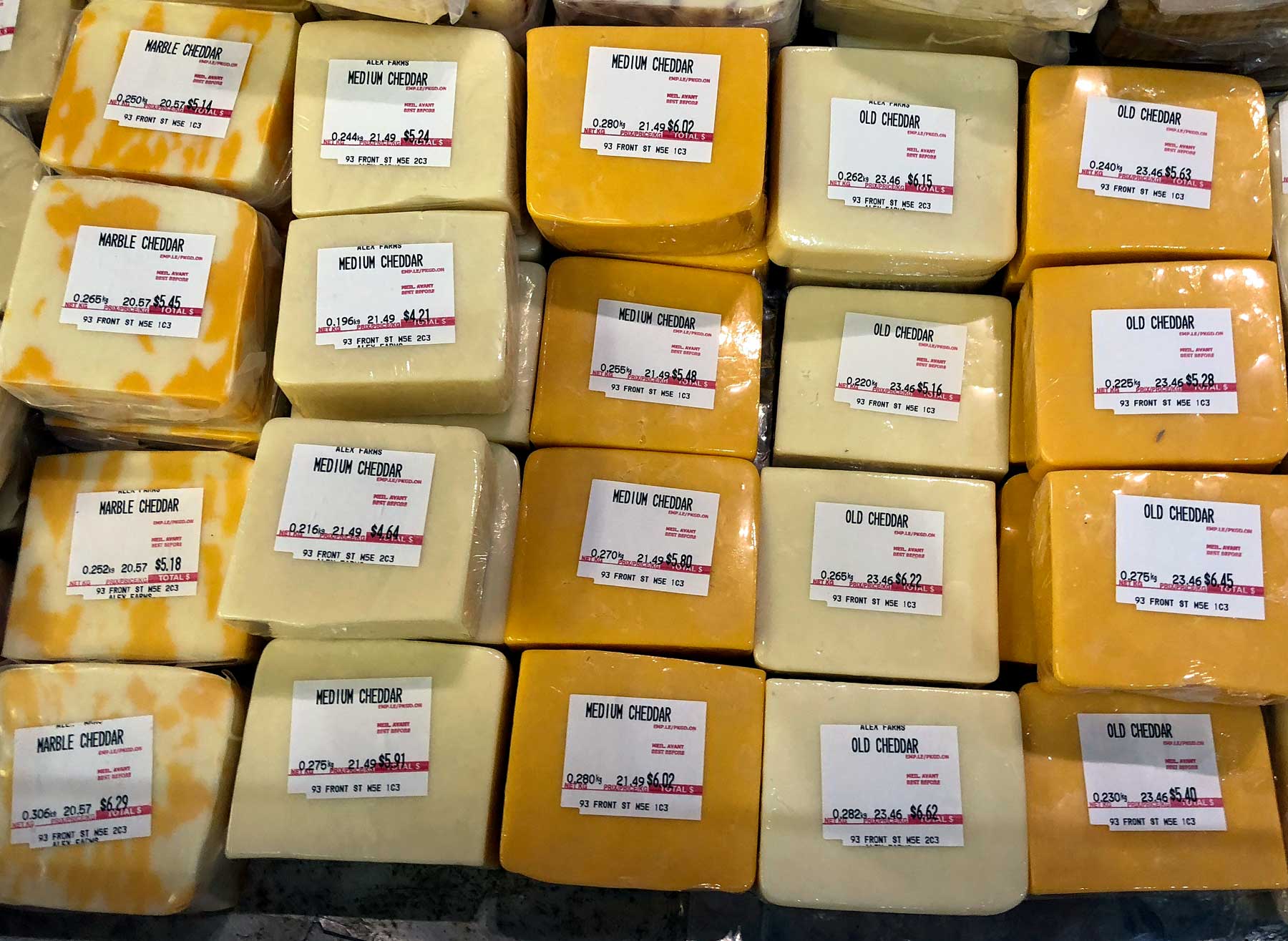 Spots of mould will inevitably appear on cheddar you are storing it for a long time at home in the fridge. It is safe to just scrape them off and discard them.

Cheddar freezes well. After freezing it may be a bit too crumbly for eating, but it is still great for cooking with.

When large blocks of cheddar come on sale, consider buying 3 or 4 of them. Grate them all with a food mill or food processor, pack the grated cheese loosely in freezer bags, and freeze. This gives you instant grated cheese to speed up evening meal preparation, or to dress up dishes when you feel at the last minute that some grated cheese on top or stirred in would be just the ticket. If you had to go to the bother all the time of grating cheese on the spot, you might not have the inclination or time to go to the extra work and clean-up: but because it’s ready to go and in your “store cupboard”, frozen grated Cheddar is able to jazz up your dishes whenever you feel like it.

Cheddar is a British cheese, which the Brits took with them when they settled countries such as the US, Canada, New Zealand and Australia. But so ingrained is the cheese now in those countries it is understandable that many grow up thinking Cheddar to be a Canadian or Australian cheese, and are surprised to discover that the Brits make it, too.

“No-one seriously suggests trying to restrict all Cheddar cheese to the Cheddar region. It is made all over the world, including Australia and New Zealand, which export huge amounts of it to us.” — Parish, Neil. (Chairman of the European Parliament’s Agriculture Committee.) Perfect compromise on Channel Island’s designation bid. Plymouth, England: Western Morning News. 20 August 2008.

It’s a toss-up whether to capitalize Cheddar or not in English (along with cheeses having names of other places such as Brie, Camembert, Swiss, etc.) No one style guide agrees. Essentially the consensus seems to be just do it one way or the other, but be consistent.

Parker Bowles, Tom. Real Cheddar comes from a farm, not a factory – so chuck out the plastic imposters. London: Daily Mail. 3 April 2010.

Smale, Will. Separating the curds from the whey: Cheddar cheese has gone a long way since it was invented in the quaint Somerset village of the same name back in the Middle Ages. BBC News, Somerset. 21 August 2006.

This web site generates income from affiliated links and ads at no cost to you to fund continued research · Information on this site is Copyright © 2022· Feel free to cite correctly, but copying whole pages for your website is content theft and will be DCMA'd.
Tagged With: American Food, British Cheeses, Canadian Food