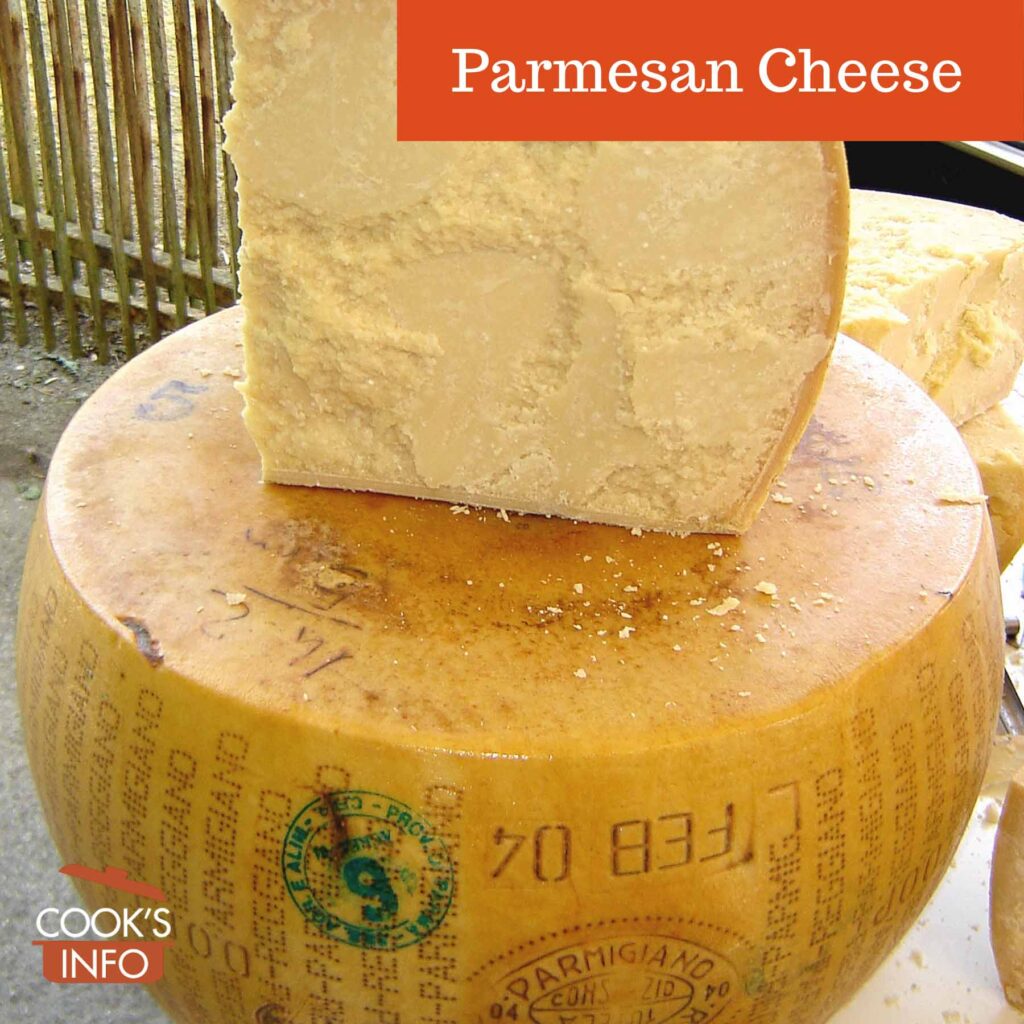 Parmesan cheese is a hard, highly-flavourful cheese typically used in small amounts to add flavour accents as a garnish on dishes.

The wheels of aged Parmesans are straw-coloured. The cheese is crumbly and has a slightly salty taste.

Parmesan must be made in Parma or Emilia-Romagna. Any Parmesan-type cheese produced outside that area has to call itself a “grana.” (See: Grana Padano)

Each dairy’s production is tracked and inspected in “lots”, which correspond to four months of the year:

(Some foodies feel the best Parmesan cheeses are those produced between April and November.)

The rinds of Parmesan are not eaten or grated.

When Parmesan is cut into small wedges for retail sale, it must by law be cut so that some portion of the rind is showing. This allows consumers to see the trademark on the trade and see that it is the genuine article. Coincidently, cynics point out, it also means that the inedible rind becomes part of the weight that consumers have to pay for.

It is made from skim raw milk from cows. Calf rennet is added to the milk, and the milk heated until it curdles. The curd is cut, heated to 51 C (125 F), stirred, then heated further up to 55 C (131 F). The curd is packed into moulds lined with cheesecloth, then removed from the moulds and soaked in brine for a month. 16 litres of milk (4 ½ gallons US) are needed to make 1 kg (2 ¼ pounds) of the cheese.

The whey leftover from the process is used to feed pigs, which then become meats such as mortadella and Parma ham.

The cheeses are aged on wooden racks for anywhere from 12 months to 3 years. Young Parmesan cheese, just over a year old, is mostly sold inside Italy; it is typically shaved thinly for use as a garnish. 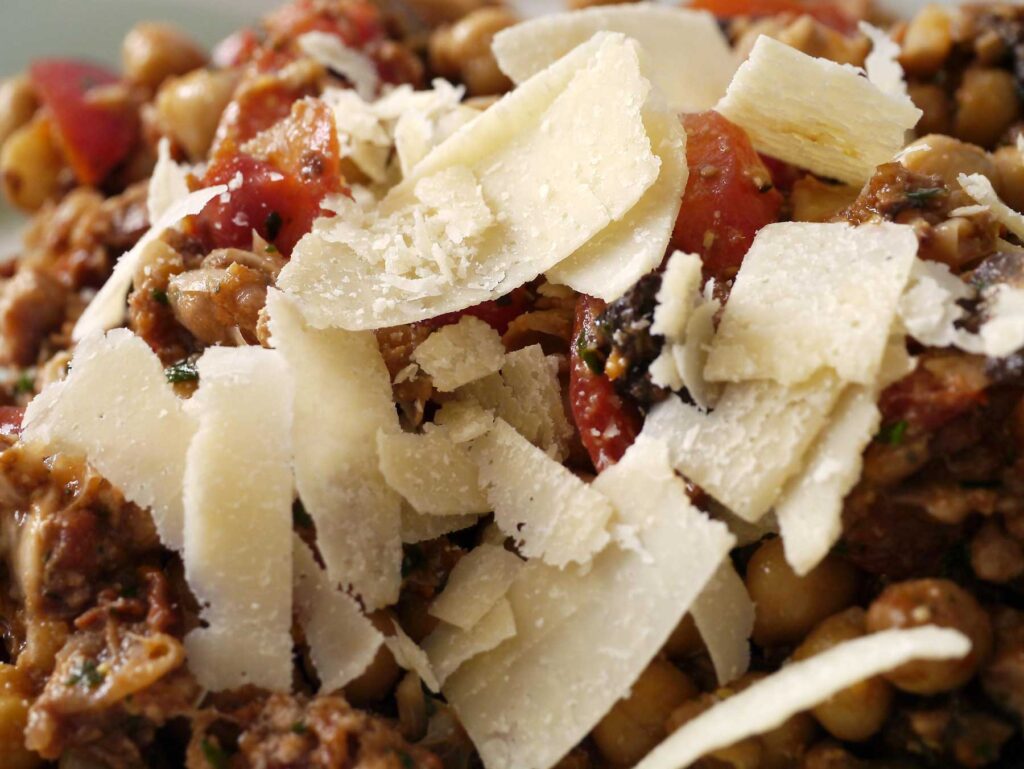 Cheese makers often leave wheels of Parmesan cheese with their bank as collateral. The banks have special vaults to store the cheese in, so that it can age properly while they are holding it. 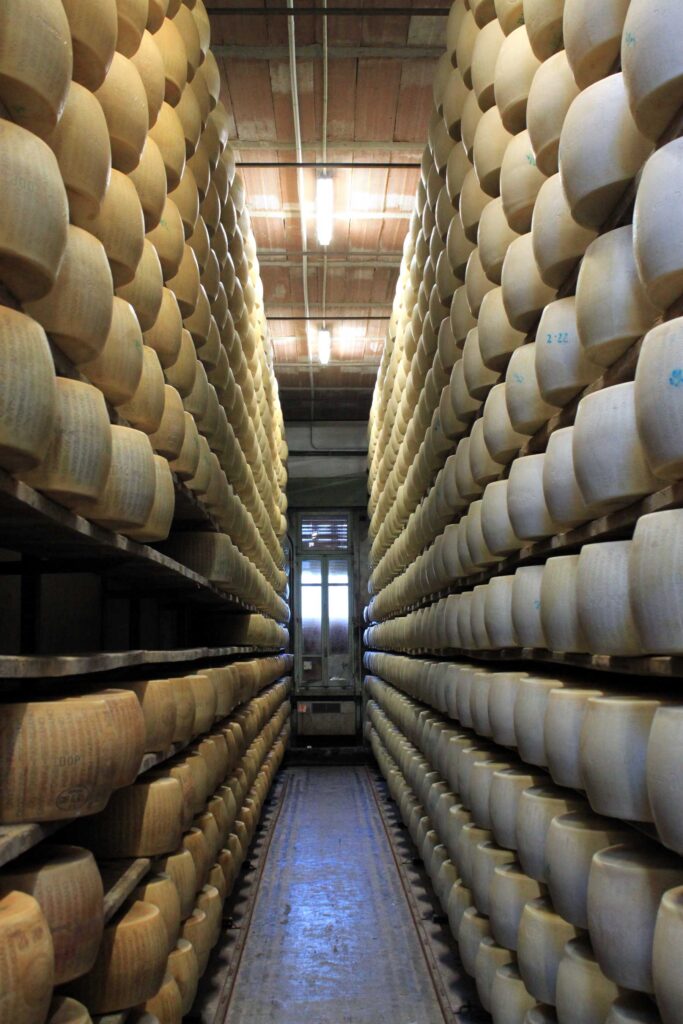 Inspection of the aging cheeses is done by experts appointed by the Consortium. At least one cheese from each “lot” must be inspected by cutting a portion from it for internal inspection. Its appearance, texture and aroma are assessed. The lot is then graded first grade, medium grade or rejected. The grading is branded on the wheels of cheese that pass the testing with a hot iron. Rejected wheels have to have their Mark of Origin removed; then are then sold on for industrial processing or sale not under the official name. [1]Ministero Delle Politiche Agricole Alimentari E Forestali. Decreto 20 luglio 2006. Modifica del decreto 13 gennaio 2006 relativo alla protezione transitoria accordata a livello nazionale alla modifica del disciplinare di produzione della denominazione di origine protetta «Parmigiano Reggiano», registrata con regolamento (CE) 1107/96 della Commissione del 12 giugno 1996. In: “Gazzetta Ufficiale della Repubblica Italiana, n. 185 del 10 agosto 2006.” Dairies have four days in which to register an appeal over rejected lots; if they do, a second, different inspection team is sent out within 15 days of the appeal being received. 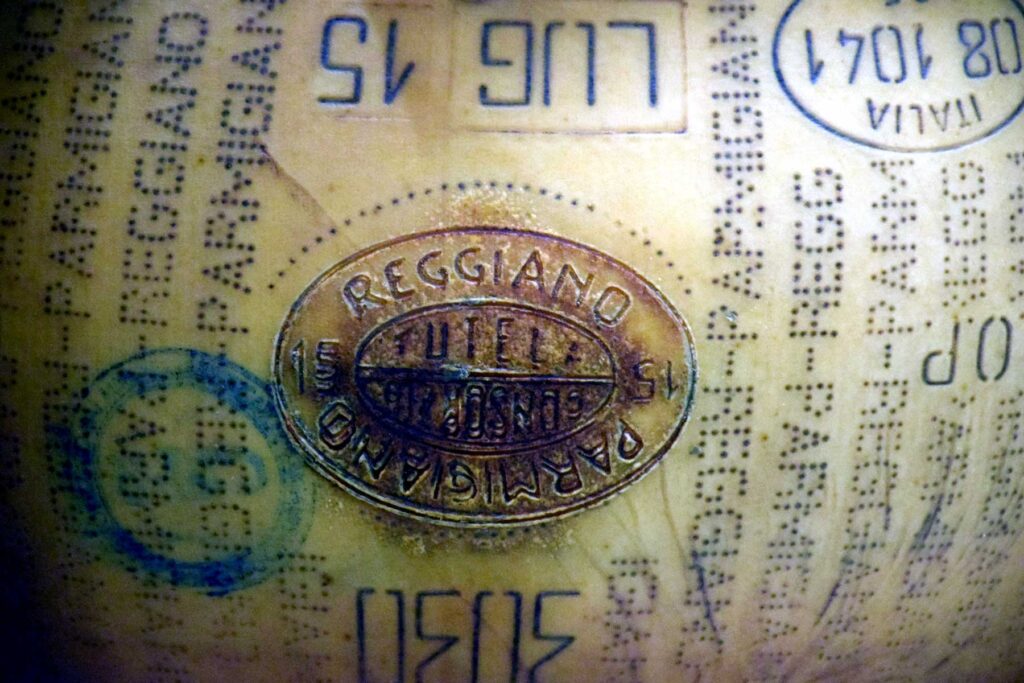 Even if the cheese is only eight months old when it passes inspection (example: produced in April, inspected in December), “cheese cannot be put on the market for consumption under the Parmigiano-Reggiano protected designation before having reached the 12th month of maturation”. [2]Ibid.

In Italy, people usually reserve Parmesan as a “finishing cheese” to put on the table. It’s not generally used as an ingredient in cooked dishes; for that, they use Grana Padano cheese instead.

Parmesan rinds can be used as you would a “bouquet garni” in soups to add flavour.

Wrap Parmesan in waxed paper, then in tin foil or plastic wrap, and refrigerate. Wrapping it in plastic wrap alone will make the cheese sweat.

On a good day, people date Parmesan back all the way to the Etruscans.

“Sir W. Batten not knowing how to remove his wine, did dig a pit in the garden, and laid it in there; and I took the opportunity of laying all the papers of my office that I could not otherwise dispose of and in the evening Sir W. Pen and I did dig another, and put our wine in it; and I my parmazan cheese, as well as my wine and some other things.” — Samuel Pepys, 4 Sept 1666 (readying himself for the Great London of London, as it approached his house.)

This web site generates income from affiliated links and ads at no cost to you to fund continued research · Information on this site is Copyright © 2023· Feel free to cite correctly, but copying whole pages for your website is content theft and will be DCMA'd.
Tagged With: Italian Cheeses, Protected Designation of Origin, Skim-Milk Cheeses