Contents hide
Yule Log, also known by its French name of Bûche de Noël, is a rolled-up, iced cake made and served at Christmas time.

The cake can be chocolate or a plain sponge or a Genoise, cooked in a long flat pan. You spread a filling out on top the cake, then roll it up carefully, and ice it. The icing of the cake is done roughly with an icing comb in such a way that the icing will look like bark. The icing can be chocolate or coffee-flavoured, or both. It is then usually decorated quite elaborately, to make it look as much like a log as possible, and to make it festive and jolly.

In execution, a Yule Log is like a Swiss Roll that doesn’t get to get dressed up for the ball. In fact, Yule Log fans complain that many sold at stores are just poorly disguised Swiss Rolls.

There is many a nervous breakdown over making Yule Logs, as they are meant to be end up the centre of attention for everyone to ooh and ah over. Most of the work is in making all the components that you have to assemble, but most of the stress is in the assembly. A few sad ones have never made it to the tables: the Logs have ended up in garbage disposals and the cooks’ heads in gin bottles.

Cheats can now buy cake pans that will make your Yule Logs look like Yule Logs, replete with little log knots in them, without having to roll them. The pans are about 12 inches (30 cm) long, hold about 6 cups (48 oz / 1 ½ litres), and don’t cost much, only about $12.00 US. The pans are long, and rounded on the top like half a log. You just have to ice and decorate the cake; there is no rolling or filling involved.

In France, Bûche de Noël is served as part of the Christmas Eve meal after Midnight Mass. 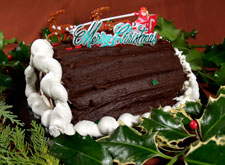 Everyone tries to make Yule Logs out to be as old as the Celts, but an edible cake dressed up as a log for Christmas doesn’ actually go that far back. The first mention in print of a Bûche de Noël occurred only in 1879, in France. Though touted as a French-Canadian tradition in Quebéc, the cake wouldn’t likely have reached Québec until sometime after that.

It hasn’t been very long that ordinary people at home could turn out the kind of sponge cake needed for it: cake that is light like a sponge can only date from at a minimum the end of the 1800s requiring as it does even oven temperatures, etc. And people certainly didn’t have access to chocolate as an affordable baking ingredient until the mid to late 1800s.

What does go way back, though, are Yule Logs as actual pieces of wood burned at a winter festival. The Norse celebrated Yule, and burned a log both in celebration of light at a dark time, and to honour the gods. By the 1100s, their custom had transferred to Christian Europe for celebrating Christmas.

Cinders or a remaining piece of the Yule Log were kept, even by Christians, all year long as they were thought to protect the house from fire. When next Christmas rolled around, the cinders were tossed in along with the new Yule Log for good luck.

It was considered bad luck to buy a Yule Log. You had to cut it yourself or have it given to you. Yule Logs weren’t small either: the logs were often so big that part of them would be sticking out into the room, while the other part burned in the fireplace (try to get that past the fire inspectors today.) The idea was that it would be big enough for burn for all 12 days of Christmas: you pushed more of it into the fireplace as it burned up. Large logs were also a way of showing that you had a prosperous household.

The tradition started to disappear along with large hearths in the kitchen, and then disappeared entirely with the disappearance of fireplaces anywhere in the house. The tradition was carried on by putting a small, wood log on the table, dressed up with decorations that included candies and treats. Eventually, the edible idea got extended to the whole log as the kitchen technology came about to make it possible at the end of the 1800s.

There were many other superstitions about Yule Logs (the wooden ones.) If the log didn’t catch fire the first time you attempted to light it, that boded ill. The log had to burn for a minimum of 12 hours straight. The log shouldn’t be poked or its embers stirred while any of Christmas dinner was still on the table. And more ominously, if the fire from the log cast someone’s shadow on the wall, and that person’s shadow appeared to be headless, that person would be dead within the year.

The Yule Log Programme is a special holiday television programme — it’s 3 hours of looking at a crackling fireplace with Christmas carols played in the background. It was first created by WPIX Channel 11, a New York TV station, in 1966, being filmed at Gracie Mansion, home of New York’s mayors. A second version, the one that is used today, was shot in 1970, at a fireplace in California.

The programme was first aired Christmas Eve 1966 starting at 9:30 pm.

This web site generates income from affiliated links and ads at no cost to you to fund continued research · Information on this site is Copyright © 2023· Feel free to cite correctly, but copying whole pages for your website is content theft and will be DCMA'd.
Tagged With: French Food, Québécois Food