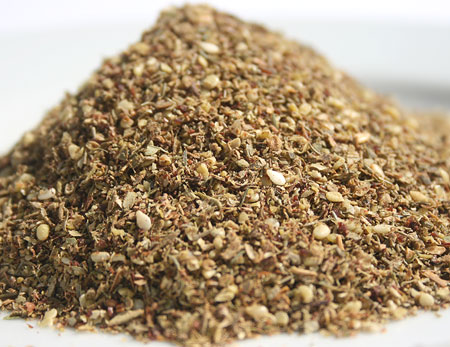 Za’atar in Arabic can mean the herb “thyme.”

It is also used to refer to a spice-mixture based on thyme. Though thyme will be the dominant herb in the mixture, the other spices used in the mixture vary though always seems to include sumac and sesame seed. Wild Oregano appears quite often as well.

Before being used, a small amount of olive oil is usually added to some of the mixture in order to make a spreadable paste.

Za’atar is often spread on a pita bread which is then drizzled with a little more olive oil.

Za’atar is now very popular in Israel as well, and many Israelis see it as part of their cooking culture, though it’s usually thought to be Arabic in origin.

Because the Wild Oregano used in the Mid-East isn’t available here, recipes usually use a combination of oregano, marjoram and savoury to better approximate the taste. Sumac prepared as a spice is difficult to obtain outside the Mid-East, so Western recipes usually omit it.

Toast sesame seeds in oven for about 6 minutes at 175 C (350 F.) Remove from oven, let them cool. Combine all ingredients except the salt in a spice mill or blender and pulverize to a fine powder. Taste. Add up to 1 teaspoon of salt, if you think it is needed, and whiz again for a few seconds. Non-iodized salt works better as its taste is cleaner. Some salt substitutes may also work as it is just the taste you are after here.

Store in a sealed container in a cool, dark place for up to 3 months (what limits the storage life is the sesame seeds, which can go rancid.) It’s better kept in the refrigerator. You can keep the homemade mix in the freezer as well for up to 6 months.

You may also see it spelt “zahtar” in English.

This web site generates income from affiliated links and ads at no cost to you to fund continued research · Information on this site is Copyright © 2022· Feel free to cite correctly, but copying whole pages for your website is content theft and will be DCMA'd.
Tagged With: Arabic Food, Jewish Food