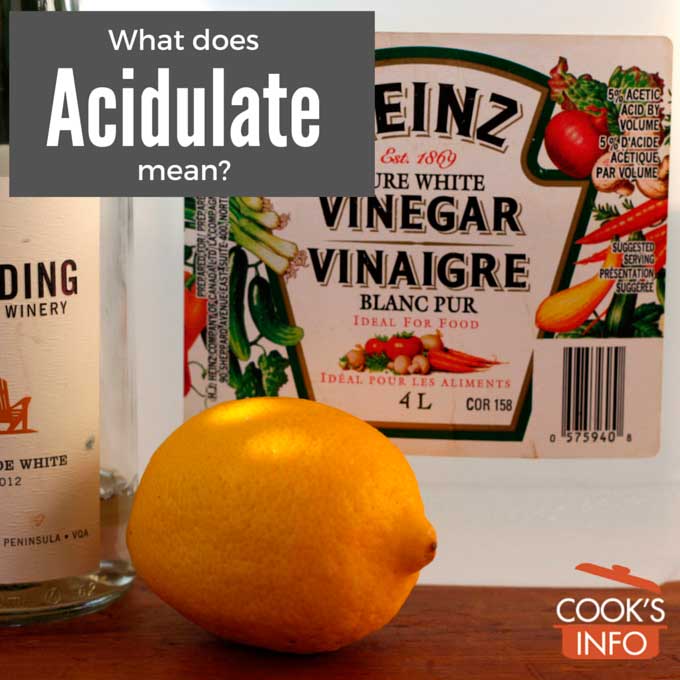 In cooking, the acid can be a vinegar, a citrus juice or even wine. It will always be an acid that is food safe, and have levels of acidity that are low enough to be safe for people to touch and consume.

Normally, the acid used will be a clear one or in any event one that will not “dye” the food a darker colour. For instance, in the case of wine, white wine is usually used instead of red, and in the case of vinegar, a white vinegar is usually used instead of red wine or balsamic vinegar. A typical citrus juice used is lemon or lime for the same reason, as those juices don’t colour food the same way that orange juice would.

The noun is “acidulation”; the adjective describing something to which acid has been added is “acidulated.” An additive to achieve this is called an “acidulant.”

“Acidify / acidified” are words that are very close in meaning, but they imply a much greater dose of acidification taking place.

There are at least 3 different reasons why you might “acidulate” something in cooking:

1. Acidulation for the appearance of food

The goal may be to end up with “Acidulated Water” that will stop sliced or cut food from browning. Changing the taste is not a goal. This requires the least amount of acid;

2. Acidulation for the flavour of food

The goal may be to give the food item a bit of a tart or sour taste, which can sometimes make things taste lighter and fresher, as lemon juice does. This requires more acid to be used than for just appearance;

Sometimes people use the term when talking about preserving, to mean that they boosted up the acid content (such as tomatoes) so that it could be safely canned.

This reason for acidulating requires the most acid, and, acid of guaranteed levels.

This is almost always achieved with vinegar, and most typically in North America, with distilled white vinegar. Safe preserving guides will almost always require a vinegar of 5% acetic acid or higher.

When flavour is a consideration (for instance, vinegar could adversely affect the taste of tomato products), another acidulant such as powdered citric acid or bottled lemon juice (bottled, for certified acidity levels) may also be specified.

Follow the safety advice given in your current, modern preserving guide from a reputable home canning source such as the USDA, a university extension service, or a Jarden-owned home canning company such as Ball, Bernardin or Kerr.

This web site generates income from affiliated links and ads at no cost to you to fund continued research · Information on this site is Copyright © 2022· Feel free to cite correctly, but copying whole pages for your website is content theft and will be DCMA'd.
Tagged With: Preserves, Vinegar