Charles Ranhofer, the American chef of Delmonico Restaurant fame, gave a recipe for a dish resembling Baked Alaska in his 1893 book “The Epicurean.”

He referred to the dish as “Alaska, Florida”, and gave directions for it to be made in individual portions.

A cake base is hollowed out and spread with apricot jam. The ice cream is moulded into a cone shape, then has its base inserted into the hollow of the cake base. The whole thing is then covered with piped meringue, browned for 2 minutes in a hot oven, then sent to the table.

“Prepare a very fine vanilla-flavored Savoy biscuit paste (Recipe No. 3231). Butter some plain molds two and three-quarters inches in diameter by one and a half inches in depth; dip them in fecula or flour, and fill two-thirds full with the paste. Cook turn them out and make an incision all around the bottom; hollow out the cakes and mask the empty space with apricot marmalade (No. 3675). Have some ice cream molds shaped as shown in Fig. 667, fill them half with uncooked banana ice cream, and half with uncooked vanilla ice cream; freeze, unmold and lay them in the hollow of the prepared biscuits; keep in a freezing box or cave. Prepare also a meringue with twelve egg-whites and one pound of sugar. A few moments before serving place each biscuit with its ice on a small lace paper, and cover one after the other with the meringue pushed through a pocket furnished with a channeled socket, beginning at the bottom and diminishing the thickness until the top is reached; color this meringue for two minutes in a hot oven, and when a light golden brown remove and serve at once.” 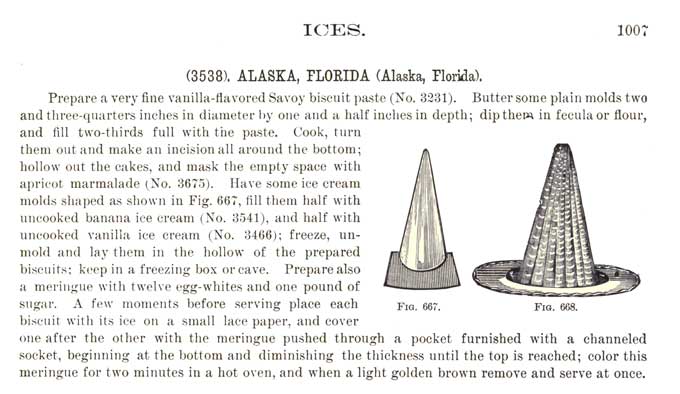 This web site generates income from affiliated links and ads at no cost to you to fund continued research · Information on this site is Copyright © 2021· Feel free to cite correctly, but copying whole pages for your website is content theft and will be DCMA'd.
Tagged With: American Food, Delmonico's Restaurant, Ice Cream