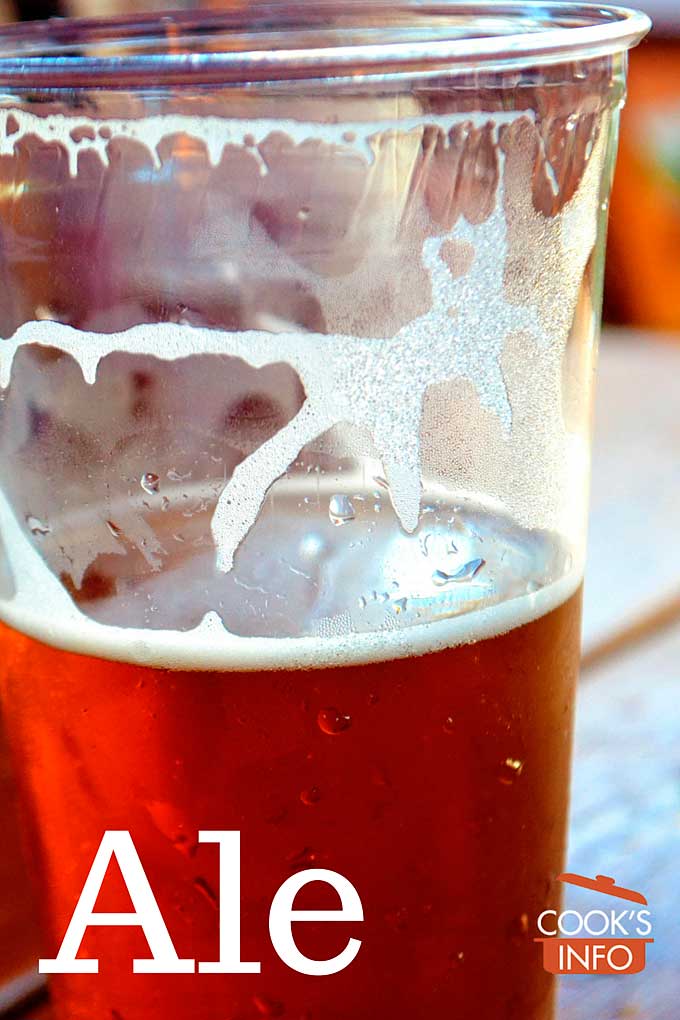 Ale is a category of beer brewed with a top-fermenting yeast. [1]Saccharomyces cerevisiae

Ale is one of the two main categories of beer made today, the other being lager, which is brewed with a bottom-fermenting yeast.

Other beers are grouped under either Ale or Lager. For instance, stout is categorized under Ale.

Alcohol content ranges from 5% for the pale ales, up to 6.5 % for the darker ales.

Ales remain popular in the UK, though lager now (as of 2010) outsells ale there. Ale was traditionally seen as British, and lager as German.

Ales take generally 3 to 4 weeks to make. During brewing, you need a warmish temperature, between 60 and 75 F (15 and 24 C), to keep the yeast alive on the top, hence ales were traditionally “summer beers.” Ales have a sweeter, fruitier taste, that comes from the secondary aroma products that yeast releases at higher temperatures. This is balanced with bitterness by the addition of hops.

“Cask-conditioned” Ale, or “real ale”, leaves breweries in casks, with the yeast still active and fermenting. The end of the fermentation process takes place in pub cellars; this can take two to four weeks depending on the ale.

Ale-category beers are made in Belgium, Germany, Ireland, United Kingdom, and eastern parts of Canada. They are less common in America. Varieties of ale include Brown Ale, Light Ale, Pale Ale, Red Ale, Porter, Stout, etc. Most use malted barley, though some varieties use malted wheat.

London, England has an unofficial, “official” ale-tester. It’s an annual position, sponsored by Old Spitalfields Market near Liverpool Street Station. The first holder of the part-time post, won by competition in June 2010, was a man named Steve Williams. The position is ceremonial, with the goal of promoting good pubs and good ale. Reports are filed on a blog at http://www.londonaletaster.co.uk (link current as of 2011.)

The difference used to be that ale wasn’t brewed with hops, and so was considered distinct from beer. There was beer, and then there was ale. Ale was instead brewed with a mixture of herbs and spices called “gruit” that provided the bitter component instead of hops.

Another difference between ale and beer is how the wort (the grains and water) was handled. For ale, boiling water was poured onto the malted grain, and the mixture allowed to steep, then the liquid drained off and yeast added to the liquid. For beer, the wort was actually boiled, and hops were added during the boiling.

While the liquid drained off the wort in ale is boiled today a second time, it probably wasn’t in medieval times. This left more protein suspended in the liquid, resulting in a cloudier (but a more nutritious and perhaps a tastier and more satisfying) beverage. But those proteins also made it more prone to spoil quickly. That, combined with the fact that without the hops to help as a preservative, meant that ale didn’t last long, going sour in a few days. Judith Bennett, author of Ale, Beer, and Brewsters in England, notes in her book that in 1446 at Elmley Castle, Worcestershire, a law was even passed against selling ale more than four days old. [2]Judith Bennett. Ale, Beer, and Brewsters in England: Women’s Work in a Changing World, 1300-1600. Oxford University Press. Page 190, endnote 17.

Ale was part of the basic diet of a household, and was drunk by everyone in England in the Middle Ages — no one trusted plain water; the alcohol content in beers, ales and wines made them safe to drink bacteria-wise. Judith Bennett estimated that a household of 5 people would require about 9 UK gallons of ale a week. [3]Ibid, page 19.

Brewing ale was part of the basic, weekly routine for housewives. Those who made extra for sale would put an “ale stick”, often just a branch, up outside their house, to indicate that ale was for sale there that day. Those who regularly made ale for sale were known as “ale-wives” or “brewsters” (“brewer” being the term for a man.) Some areas of England introduced a law that the ale-wife first had to call for (and pay) an ale-taster (always a man) to come by to ensure that the batch being sold was fit for consumption, with fines to help enforce that law.

Thus, there was a gender distinction, too, between ale and beer. Women brewed ale, men brewed beer. The men’s trade was a more powerful one, of course, because (a) they were men, and (b) thanks to the use of hops, their product could actually be stored and transported, making it more profitable.

By the 1400s, some alewives had started to modify their recipes to introduce hops into the ales. Determined to keep the distinction (both product and profit wise) between ale and Beer, the “Brewer’s Company” guild (formed 1437) asked the Lord Mayor of London to enforce that “no hops, herbs, or other like thing be put into any ale or liquore wherof ale shall be made — but only liquor, malt, and yeast.”

Despite continued and repeated efforts to the contrary, shortly after the start of the 1500s almost all ale in England had hops in it. In 1524, a final effort under Henry VIII was made to stamp out the usage of hops in ale, but it was unsuccessful.

An unexpected consequence of this was perhaps that with ale now becoming a “beer”, owing to the introduction of hops, production of it left the hands of women and was taken over by men and their brewing guilds.

Ale without hops was still being made in Scotland in the 1550s.

The word “Ale” comes from the Old English “alu”, which was similar to the Saxon “alo” and Norse “öl.”

Top-fermenting is called “Haute fermentation” in French, and “obergärig” in German, “ober” meaning “over.”

This web site generates income from affiliated links and ads at no cost to you to fund continued research · Information on this site is Copyright © 2022· Feel free to cite correctly, but copying whole pages for your website is content theft and will be DCMA'd.
Tagged With: Ale, Beer