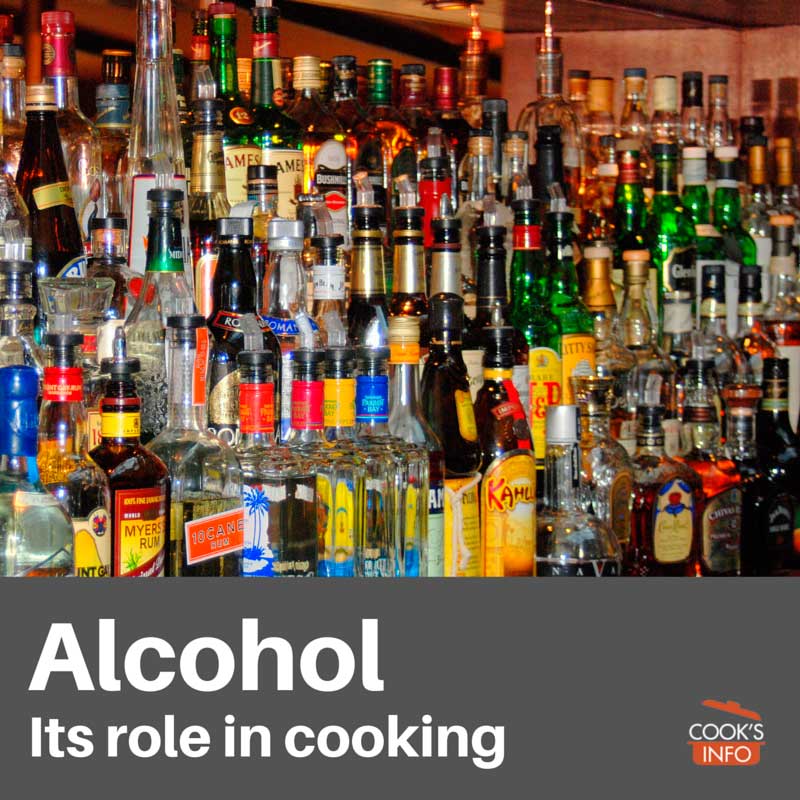 Some great news for the jollier souls amongst you: it’s just a myth that alcohol goes away when you cook with it, leaving only the flavour. Much of it in fact does survive.

Here’s the science behind alcohol in cooking. Water boils at 100C / 212 F. Alcohol boils at a much lower temperature, 78C / 173F. (A liquid containing both of these will boil somewhere in between, depending on the ratio of each to each.) Alcohol boils at a lower temperature because its molecules are not held as tightly together as are water molecules, thus, it takes less energy to loosen alcohol up.

Despite starting to boil much sooner than water does, alcohol does not just evaporate away the instant it is heated. No other cooking liquid does, either. Up to 85% of the alcohol can remain, depending on how high a temperature the food was cooked at, for how long, and whether you started with a weaker form of alcohol such as beer or a stronger one, in a spirit such as bourbon.


That being said, alcohol typically does want some cooking time in most dishes anyway, to reduce the harsh edge. The exception is in uncooked dishes such as trifle.

Alcohol also freezes at a lower temperature than water. Water freezes at 0 C, while to freeze alcohol solid you need to bring the temperature down to -114 C.

Ethyl alcohol is the alcohol that we drink in beverages. Whenever you’re reading anything about alcohol that will be consumed, you can presume it’s Ethyl alcohol that is meant. In its pure state, it is colourless. The highest alcohol content that “nature” can produce on its own is about 15%. The alcohol in a batch of brew is the “waste” that the yeast gives off as it feeds on the sugars. But over 15%, the yeast get killed by their own waste, so the alcohol production stops. To get a higher alcohol content, the liquid is distilled, which essentially extracts the alcohol. Because governments are addicted to alcohol — the tax revenue, that is — home distillation is illegal in most countries. One exception is New Zealand.

Proof means twice the percentage of alcohol. An alcohol that is 80-proof is therefore 40% alcohol; 100-proof is 50% alcohol. This all comes from the old way that the “integrity” of booze used to be measured. (Actually, the real proof number is just a few decimal points higher, but the doubling is deemed close enough.)

Apparently alcohol mixed with another non-alcoholic liquid such as water won’t burn unless the mixture is a minimum 50% alcohol. A test was invented over time which took advantage of this fact, in order to determine that people weren’t getting or paying for alcohol that was watered right down. A bit of the booze was poured over a very small amount of gunpowder, and lit. If it didn’t light, but just wet the gunpowder instead, then the booze was watered down too much. If it exploded with great excitement all round, the alcohol content was too high — it was “over-proof.” If it burned slowly, that was “proof” that the alcohol content was sufficient. That was deemed to be the “100 proof” mark.

The Royal Navy, in order to keep secure the booze that was doled out as part of a sailor’s daily rations, kept it locked in the most secure place on the ship, next to the kegs of gunpowder. If the kegs of booze ever leaked however, they could ruin the gunpowder. But not if they were “proof” enough — the Royal Navy had Plymouth Gin distill a special gin for them that was over 100 proof, so that even if the gunpowder got wet with the booze, the ship’s crew could be assured that the gunpowder could still be used. You can still buy Plymouth Gin Navy Strength. It is now actually 57% alcohol, which is 114 proof.

This test got to be a little outdated, and was abandoned entirely with the invention of hydrometers — which are like thermometers that float in your batch of booze, except instead of telling you the temperature, they tell you the alcohol content (see Measuring Alcohol Content.) With the advent of these more precise readings, it wasn’t just a matter anymore of something being “proof” or not: you could then tell by how much something might be “under-proof” or “over-proof” and, no doubt, then raise the taxes accordingly.

In the United Kingdom, determination of proof is done based on weight for the most part, rather than by volume. Because alcohol weighs less than water, even though it takes up the same space, alcohol that is 50% by volume has less alcohol than the same amount of alcohol by weight. So, alcohol with British proof numbers assigned to it will always have more kick than North American alcohol with the same proof numbers. Americans measure their beer in the same way.

In cooking, alcohol is used to cut through richness, and to deglaze pans in making sauces.

Wine can give an acidic flavour if it is not reduced properly. Beer does not.

Greek alchemists in Alexandria understood the concept of distillation, and manuscripts from as early as 300 AD (that for instance of Zosimos of Panopolis) described the apparatus that would be required. They didn’t understand, however, the concept of “condensate cooling”, which for all intents and purposes is what makes distillation useful for distilling and capturing alcohol.

Distillation was discovered sometime in the 10th to 11th century by, of all people, the Arabs, who are forbidden to touch the stuff. They were looking for ways to concentrate floral waters such as rosewater into what we now call perfumes. By the mid 12th century, the knowledge had spread throughout the monasteries of Europe. Jollier souls by nature, the monks set right to work with the new techniques. Irish monks were particularly early adapters.

“Alcohol is a very necessary article. It enables Parliament to do things at eleven at night that no sane person would do at eleven in the morning.” — George Bernard Shaw (1856 – 1950.)

“Un alcoolique, c’est quelqu’un que vous n’aimez pas et qui boit autant que vous”. [An alcoholic is someone whom you don’t like and who drinks as much as you.] — Michel Colouche (French actor & comic, 1944 – 1986.)

E.C. Booz, a distiller in Philadelphia, produced E.C. Booz’s Old Cabin Whiskey from about 1840 to 1870. He sold his whiskey in bottles shaped like log cabins.

In the 1840 presidential election, his name became associated with alcohol when he passed out whiskey in log cabin shaped bottles on behalf of the candidate he supported, William Henry Harrison. Not only did Harrison win the election, Booz’s name came to mean — well, booze.

Booze appears to have acquired the “e” at the end in later usage.

Hix, Mark. Make a splash: Mark Hix shows how a little drop of alcohol can really enhance your cooking. London: The Independent. 9 April 2011.