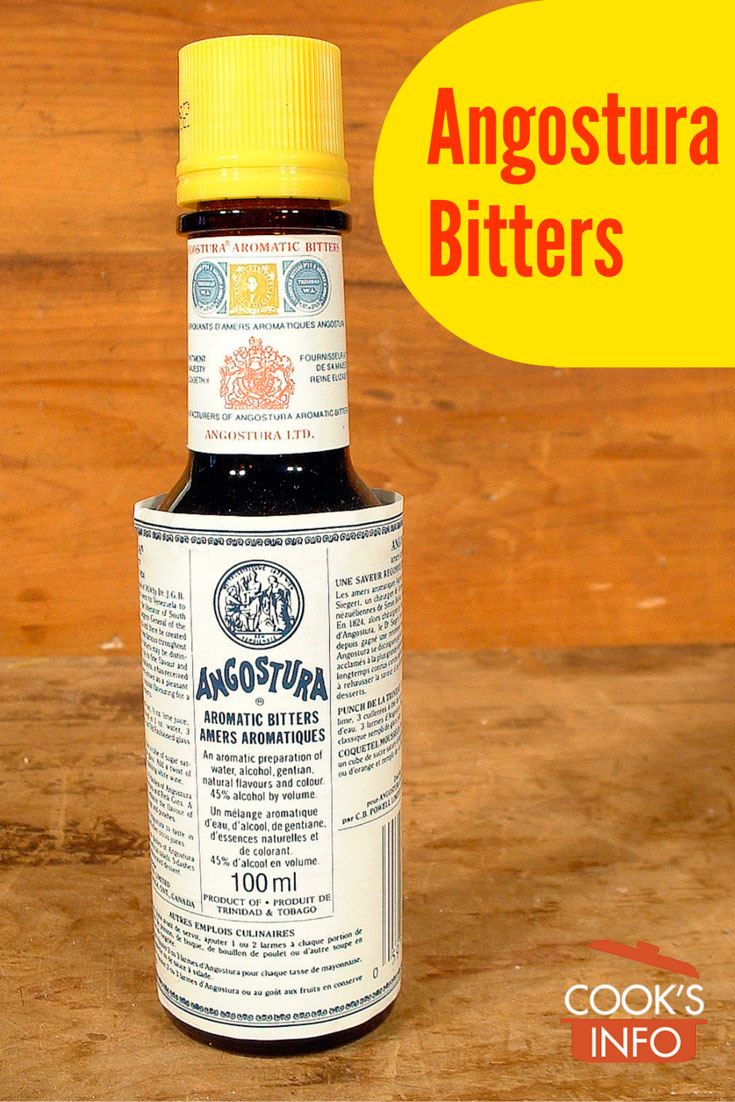 Angostura Bitters are an aromatic bitter “sauce” made from tropical spices and herbs. It’s sold in small bottles.

The exact recipe is a closely-guarded secret, divided into four pieces and stored in four separate safes.

One of its main ingredients is gentian, a European root.

The label is too large for the bottle. Company mythology has it that at one point, labels too large were delivered from the printer, but they used them all the same: the oversized label became part of the identity.

Whatever you’re using it in, you will only use a few drops at a time. Often used in preparing mixed drinks such as Manhattans.

In Trinidad, they tend to use it more generously both in drinks and in cooking.

In Australia, lemon, lime and Angostura Bitters is a popular drink. Fill a glass with ice cubes, splash in 5 or 6 drops of Angostura Bitters, then swirl the ice cubes around in the glass until they are mostly coated with the bitters. Top up with clear lemonade (mostly unavailable in North America: try Sprite instead), and a teaspoon of either lime cordial or lime juice. Garnish with a wedge or slice of lemon or line.

Angostura Bitters will stain porous surfaces such as cloth and wood if left for long.

Angostura Bitters were invented by Dr Johann Gottlieb Benjamin Siegert in 1824 while serving Simon Bolivar as Surgeon-General in the town of Angostura, Venezuela.

Siegert was born in 1796. He studied medicine in Berlin and in 1815, around the age of 21, he worked as a doctor in the army of Prussian military leader Marshal von Blücher, who was fighting alongside the Duke of Wellington at the Battle of Waterloo to defeat Napoleon in his attempted comeback.

In 1820, along with thousands of other Prussian and British soldiers who were now looking for work, he came to Venezuela to fight for Simon Bolivar. Bolivar had his headquarters at the port of Angostura in Venezuela. Siegart remained in Angostura after the fighting was over, and set up medical practice there, taking a particular interest in researching what remedies could be made from the plants in the tropical forests there.

Dr Siegert came up with his bitters, thinking they might be a remedy for stomach maladies. As Angostura was a port, sailors began taking the product away with them, and it caught on.

In 1846, the port of Angostura was renamed Bolivar City (“Ciudad Bolivar”.)

In the late 1800s, owing to continued political instability in Venezuela (plus ça change), the company moved to Trinidad, where it has remained since, made in a large factory. The company is still owned by the family.

The Orinoco River in Venezula narrows where it reaches what was the port of Angostura; Angostura means in Spanish “straits”.