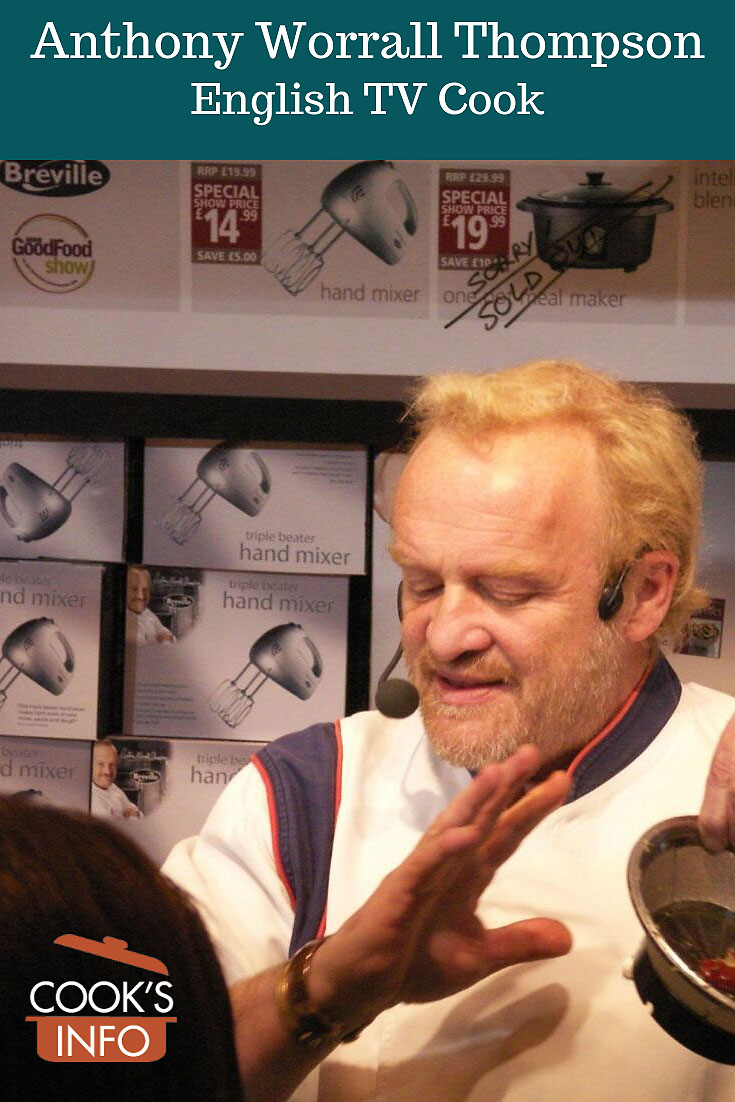 He has published many books, has owned and run several restaurants and been on food programmes on TV. He writes for the Daily Express newspaper, and the BBC’s “Good Food” magazine.

Antony has bright red hair and is 1.7 metres (5 feet 8 inches). He broke his nose seven times while playing sports. He has been married three times (as of 2006): he once tried to kill himself on a runway at Los Angeles airport over a woman.

Antony was born 1952, in Stratford-upon-Avon. His grandmother helped pay for his schooling at The King’s School (a private school) in Canterbury. Just outside Canterbury, an aunt of his ran a pub. He went there often on Sundays to help out in the kitchen. When he was 16, he swam across the English channel.

He moved into London in September 1978 to take the job of sous-chef at Brinkley’s Restaurant in the Fulham Road. Within one month, he had become head chef. In 1979, he took six months off to do a working sabbatical in France, then returned to Brinkley’s.

In 1981, he opened his own first restaurant, the Menage à Trois in Chelsea, which became a favourite of Princess Diana’s. It served just starters and desserts.

In 1998, he became the main presenter for “Food and Drink” programme on BBC Two television until 2002, along with Emma Crowhurst.

At the end of January 2009, his AWT Restaurants company went into bankruptcy administration, forcing the closure of the first four of the above restaurants:

“Sixty staff lost their jobs after four of Worrall Thompson’s restaurants stopped trading. The chef has used his own savings to keep two more outlets running, and has criticised Lloyds Banking Group for refusing him a £200,000 overdraft to help the business through the next few months…. The four restaurants that have closed are the Notting Grill in west London, the Lamb Inn and the Greyhound, both near Henley-on-Thames, and the Barnes Grill in south-west London… Worrall Thompson … will keep running the Kew Grill in south-west London and the Windsor Grill in Berkshire.” [1]Wearden, Graeme. Credit crunch forces Worrall Thompson restaurant chain into administration. Manchester: The Guardian. 9 February 2009.

Worrall Thompson blamed his bank, Lloyds Banking Group, for refusing him a £200,000 overdraft unless Worrall Thompson would put up his own house as security for the overdraft, which he refused to do. Later, at a bankruptcy meeting, “it was reportedly revealed when AWT Restaurants went under it had debts of more than £800,000 and owed 214 creditors money.” [2]Getreading. Celebrity chef ‘overstretched’. 8 June 2013. Accessed August 2019 at https://www.getreading.co.uk/news/local-news/celebrity-chef-overstretched-4239677

In this video from 9 February 2009, Worrall Thompson gives his view of what happened financially:

The Lamb was sold onto new operators in March 2009. [3]Kuhn, Kerstin. Wozza’s former pub the Lamb reopens under new owners. London, England: The Caterer. 30 March 2009. On 13 July 2009, Worrall Thompson was able to reopen The Greyhound. But a year later, in July 2010, The Greyhound received a hygiene score of just 1 out of 5 from the South Oxfordshire District Council. Thompson dismissed the rating scheme, and score, as “nonsense… We are in the recession and they are trying to kill people’s businesses.”

Worrall Thompson has often been quite critical in public of other food celebrities, and they have responded in kind. He even got a response out of Delia Smith, when he dismissed her scrambled eggs as lousy and said she was “the coldest woman on the television.” She said, “He is dreadful, just repulsive. Food and Drink (Antony’s TV show) is the most disgusting programme on television. I will never ever know, as long as I live, how the BBC or the general public can tolerate it.” For his 50th birthday, though, Delia sent him a picture of herself wearing a T-shirt that said “I love you really Antony.”

In January 2012, Worrall Thompson was arrested for attempted shoplifting cheese and wine from a Tesco’s supermarket in Henley-on-Thames, England. It was not the first time he had shoplifted from the store, reputedly: “A camera had been set up after he was spotted by staff not paying for some low-value items on a total of five occasions.” [4]Press Association. TV chef Antony Worrall Thompson caught shoplifting cheese and wine. Manchester: The Guardian. 9 January 2012.

In this video, he appears to blame the self-checkouts for “tempting him.”

Here is a spring 2011 video in which Worrall Thompson promotes various appliances from Breville’s product range.