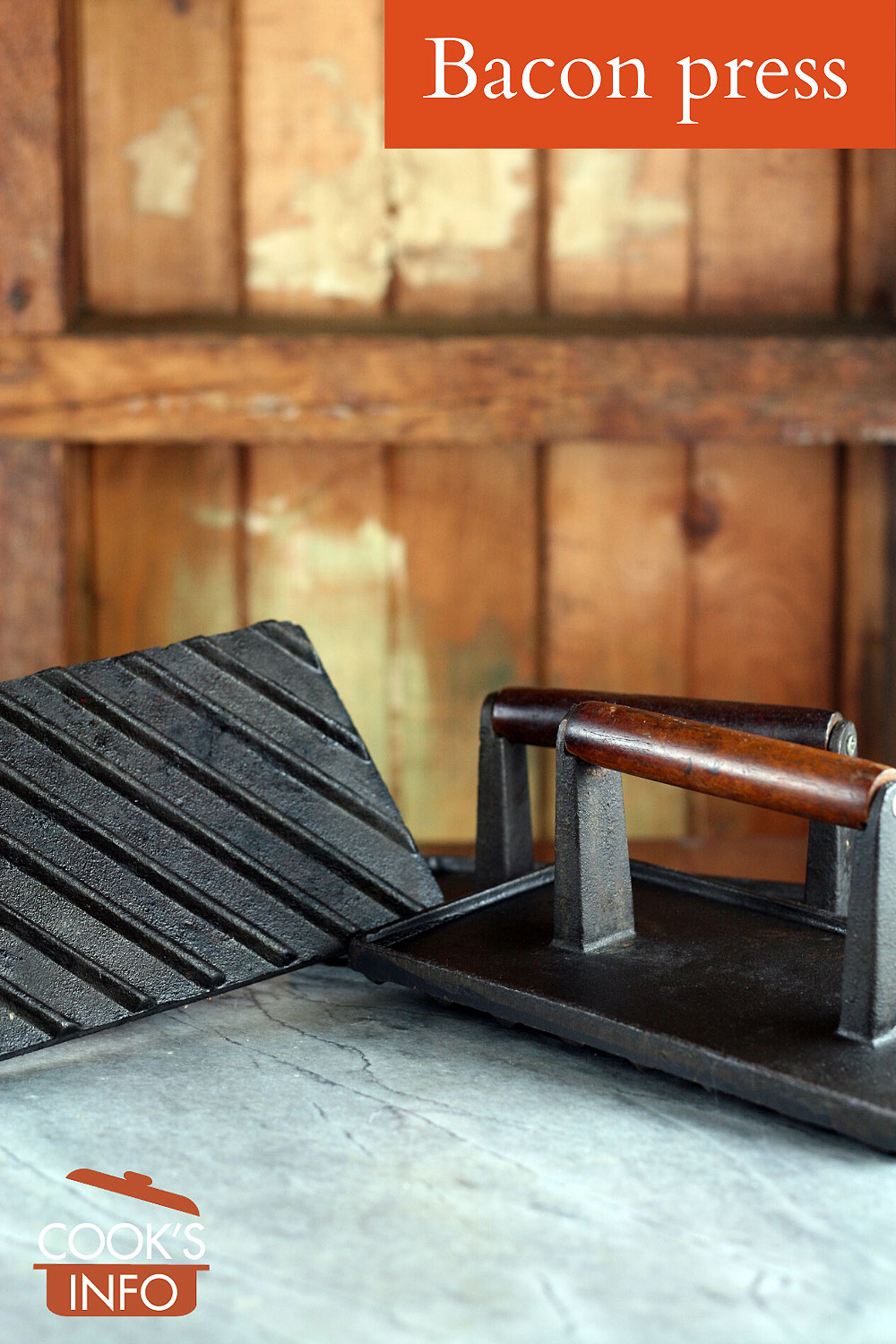 A bacon press is a heavy, flat weight used to stop bacon from curling when frying.

You put the bacon press on top the bacon strips and leave it there while the bacon is cooking. It causes the cooked bacon to come out as perfectly flat, straight strips, and reduces the amount of fat that can splatter from the bacon.

A side benefit that can be important, especially if the cost of cooking fuel is increasing where you live, is that a bacon press can reduce the cooking time of bacon from one-third to one-half.

Bacon presses can also be used:

A few bacon presses are made of glass, so you can see through them how the bacon is progressing. These glass ones tend to be about 20 to 25 cm (8 to 10 inches ) square by about ½ cm (¼ inch) thick.

Most bacon presses, though, are made of metal, either aluminum or most usually, cast iron.

Some metal ones will be lighter than others; the cast iron ones will weigh about 1 kg (around 2 pounds) in total.

Metal ones are usually rectangular, about 20 cm (8 inches) long by 10 cm (4 inches) wide. Some people say that the 10 cm (4 inch) wide ones aren’t even wide enough for 4 strips of bacon, are certainly not useful for cooking for more than one person at a time, and that they aren’t wide enough to be used as a sandwich press. To solve this problem, you may find you need two of these rectangular presses, if your pan will accommodate them. Even in an oversized round frying pan, it can be difficult to fit more than one rectangular one in at a time. If you are cooking on a griddle, you’ll be fine with two side by side. Note that some bacon presses may be only 15 to 17 cm (6 or 7 inches) long; you may find these sizes aren’t long enough for strips of bacon.

There are also round metal ones which may serve you better if you do your cooking in round frying pans (as opposed to on a griddle), and cook for more than one person at a time. These will be about 23 cm (7 to 9 inches) wide, meant to basically cover the whole bottom of a frying pan. Note that in frying pans, the size of the frying pan is measured at the top, not the bottom — so measure the bottom of your frying pan to ensure the round bacon press you are looking at will actually fit. Note as well that a few round presses seem to come with a decorative ½ cm (¼ inch) trim around them, making them in effect 1 cm (½ inch) wider than advertised.

Whether glass or metal, bacon presses will have a wooden handle or knob, or a metal coil handle on top, that won’t heat up. In prolonged cooking, though, the metal coil handles can heat up enough that you may want to use an oven mitt with them.

Some metal ones come unassembled, requiring you to put them together. Sadly, none seem to come with folding handles for easier storage.

Bacon presses are also useful on outdoor grills; in fact, people often switch to calling them “grill presses” when they walk them out the back patio door. The presses help food items such as chicken pieces, pork chops and hamburger patties to cook faster, while pressing out any unwanted fat, and preventing curling. Because they are pressing the food down onto the grill, you also get the nice grill lines in food more easily. (In fact, some “grill presses” come with ridge lines in them — but cleanup can be harder.) If you are planning to use a press for outdoor grills, you will almost certainly need several or you’ll find yourself playing musical chairs with one.

Before purchasing, check out the bottom. Some have fancy decorative grooving in the bottom; others have screw heads that come through to the bottom into indentations. Experienced bacon press hands say that both traits can make clean-up harder, though it’s nothing that a washing brush can’t deal with (expect the washing-up brush to come out blackened, though.)

Items such as pork chops often have their edges curl up on you during cooking. This can mean in order to get the curled up edges cooked, the inside areas end up being cooked longer than you would otherwise, thus drying out the meat. A bacon press helps prevent this. (Mind you, for pork chops, slits in the outside edges usually do the trick, as well.)

You will find that you’ll need to reduce your cooking times, as food items will cook more quickly with a bacon press on top of them. In an age of rising cooking fuel costs, this might for some be an added bonus.

Some people note that if you use a press on hamburger patties, you might not only press “unwanted” fat out of them, but also all the juices, leaving you with dried up patties.

Some say that there’s a catch in using a bacon press with cheaper bacon that has had a water cure injected, as most is nowadays: as the water escapes from the bacon it gets trapped under the bacon press, boiling and steaming the bacon instead of frying it.

Heating a bacon press before use

Pros suggest that if you have a cast-iron bacon press, whether using it on a grill outside or griddle inside, it should be heated up first for a few minutes if there’s time. Otherwise, if put cold onto say a pork chop, it can cool down the meat causing it to lose the sizzle and steam instead.

If fully heated before use, they say, you may find you don’t even need to flip the food or sandwiches. 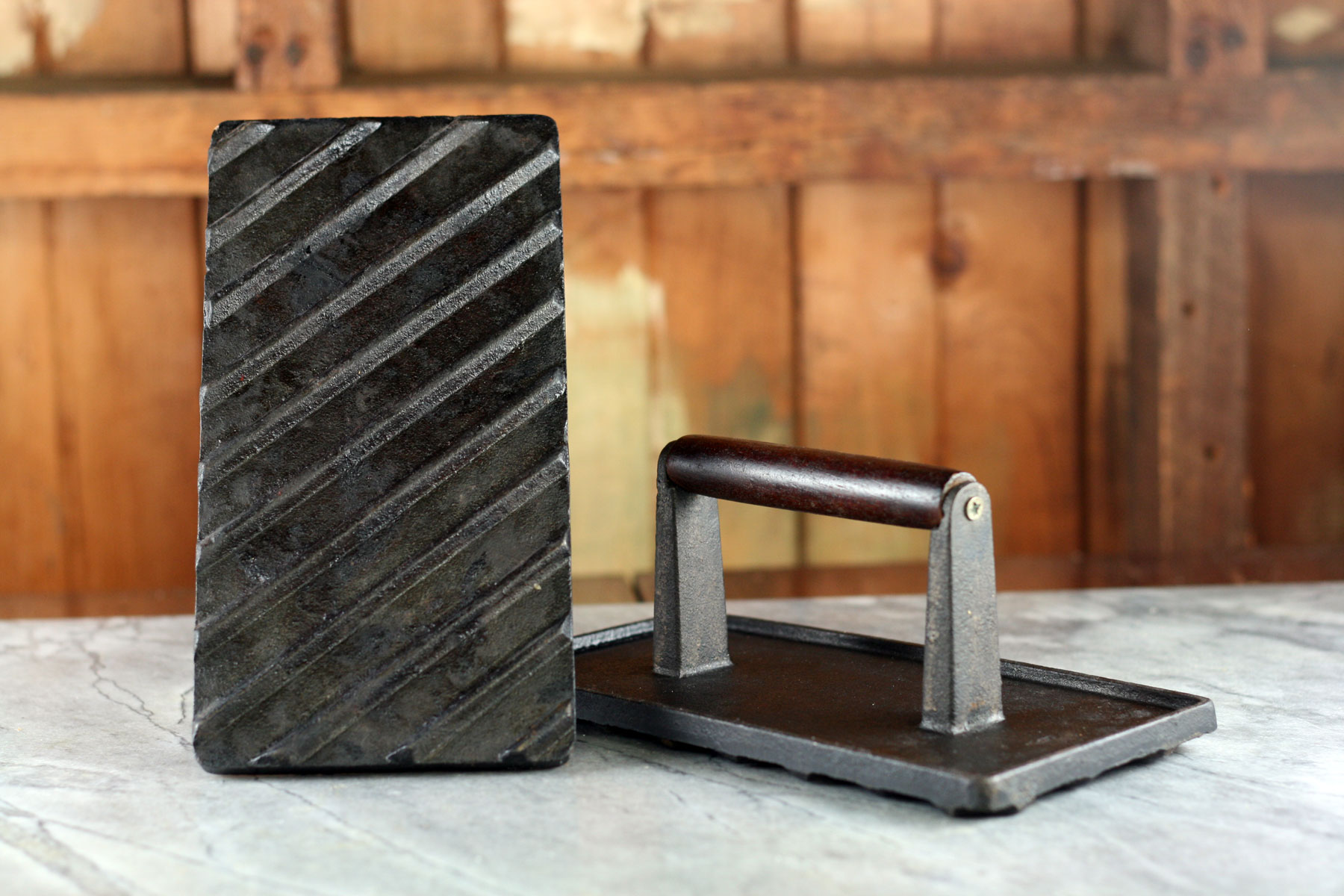 This web site generates income from affiliated links and ads at no cost to you to fund continued research · Information on this site is Copyright © 2022· Feel free to cite correctly, but copying whole pages for your website is content theft and will be DCMA'd.
Tagged With: Bacon