×
Home » Meat » Beef » Beef Round » Beef Rump
What Beef Rump is depends on where you are.

In North America, this is the upper area of the Round (see main entry for “Beef Round”), from which Rump Roasts and Rump Steaks are cut.

In Britain, Australia and New Zealand, the region is a primal cut all to itself, which takes in the areas North American butchers call “Sirloin”, “Tenderloin”, “Top Sirloin”, and “Bottom Sirloin”, with none of the round at all. 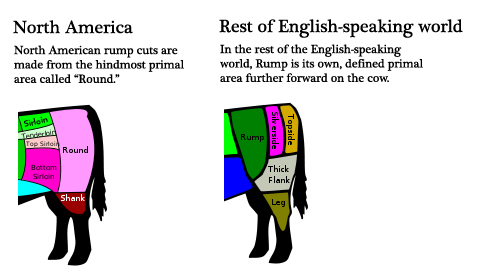 In the “rest of the English speaking-world” definition, they can be cooked as you would more tender meat.

This web site generates income from affiliated links and ads at no cost to you to fund continued research · Information on this site is Copyright © 2022· Feel free to cite correctly, but copying whole pages for your website is content theft and will be DCMA'd.
Tagged With: Beef Rump