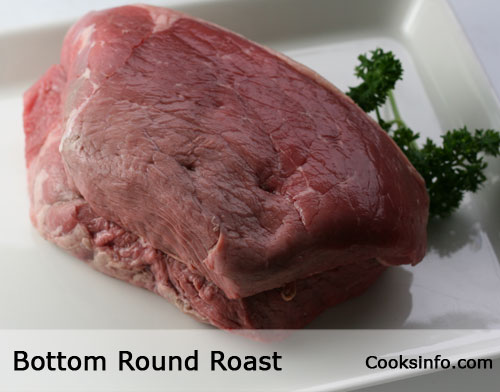 The Bottom Round Roast (aka “Outside Round Roast”, aka “Silverside”) is a cut of beef from the rear of a cow.

It has one area that is tougher than the other, as it contains two different muscles (between the two muscles is a thick band of connective tissue.) It is usually cut into two, with one cut called a Bottom Round Roast, and the other, the end that comes out into a point, is called a Rump Roast.

The meat is from the area directly above the rear legs of the cow, known in North America as the “Round.” Being used a lot by the cow, the meat from this area is lean but tough — a good cut for people looking to reduce fat consumption in their food.

In the UK, Ireland, Australia and New Zealand this cut is called “Silverside.” It is often salted and used for boiled or corned beef.

There are at least two ways to approach cooking this. You can use long, slow cooking with moist heat — in a slow cooker for instance, with braising liquid or sauce added. Or, it can also be successfully cooked as a medium-rare, dry roast using the special technique outlined here: Roasted Eye of Round

You can also cube the meat for stewing beef, grind for extra-lean ground beef, etc.

This web site generates income from affiliated links and ads at no cost to you to fund continued research · Information on this site is Copyright © 2022· Feel free to cite correctly, but copying whole pages for your website is content theft and will be DCMA'd.
Tagged With: Beef Roasts, Bottom Round, Pot Roasts