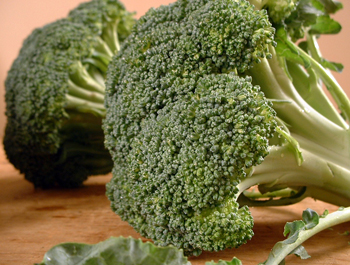 Broccoli is a member of the brassica clan, and so is related to cabbage, cauliflower, Brussels sprouts, etc. What we know today as Broccoli — the kind that is standard in North American and UK supermarkets — is the Calabrese variety developed in Italy. There are actually other types of Broccoli as well.

The florets, or heads, are actually made up of hundreds of little flower buds, which if allowed to bloom, would produce little yellow flowers. The smaller leaves are also edible, though they are a bit bitter.

Broccoli is available fresh or frozen. Frozen Broccoli may be either chopped Broccoli or Broccoli spears (meaning florets.) If it doesn’t say spears, then it’s likely chopped, which means some florets, but with a whole lot of stalk. The frozen spears are always more money than the chopped.

When buying fresh, choose firm stems with tight florets. Bypass any Broccoli that smell cabbagey or that have yellow flowers (indicating that they’re getting old.)

Broccoli can be steamed, boiled, stir-fried or microwaved.

Wash. If you think there might be wildlife living in it, soak in salted water for 15 minutes. Slice off the end of the stalk.

Cut off the head of florets. Some people discard the stems, but they are actually delicious; don’t throw them away — just take a moment to peel them with a paring knife or a vegetable peeler, and then slice. They do need to be peeled, however, as the skin on the stems is tough. Some say cook the stems separately from the florets, but they both cook within the same time if the stems have been peeled.

Salt in the water when boiling helps to keep Broccoli green while cooking. Whether steaming or boiling, florets take 5 to 7 minutes, thickly-sliced stalks 7 to 9 minutes, so either slice the stalks thinly, or consider giving them a minute head start.

A few “don’t do” tips:
Some say that if you wish to remove the smell of Broccoli cooking, throw a couple of thick chunks of bread into the cooking water. This can create of course a mooshy green “bread sauce” liquid which gets trapped in the florets.

An old tip to preserve the greenness of Broccoli is to add a dash of baking soda to the boiling water. But, besides speeding the destruction of vitamins in the Broccoli, it can give the Broccoli a slightly-soapy film, and help turn the florets to mush.

Another old tip was to cook green vegetables like this with a copper penny in the pot to preserve the vibrant green, but some people now feel that that could eventually be toxic to you.

A 2003 study by the “Society of Chemical Industry” concluded that microwaving destroys about 97% of the anti-oxidants in broccoli. They said steaming was the best way to preserve these nutrients.

Cooked Broccoli is, in a way actually more nutritious than raw. The raw contains more water that is shed during cooking. So 100 g of cooked broccoli is more concentrated that 100 g raw, and so are the nutrients in that 100 g.

Wrap fresh broccoli unwashed in a plastic bag or plastic wrap and refrigerate for up to 4 or 5 days.

Wash, peel the stalks and chop them. Cut the florets so that they are not more than 1 ½ inches (4 cm) across, or, section sizes that you deem convenient for your use

If from your own garden or a source where you think there might be insects in the florets, soak for 30 minutes in a salt brine of 4 teaspoons salt per 4 litres / gallon of water.

Blanch in boiling water for 3 minutes or steam blanch for 5 minutes. Plunge into cold water to chill, then drain, pack, label and date, and freeze for up to one year.

Broccoli is native to the Mediterranean area.

The Romans were using Broccoli by 100 BC, though the variety they used was “rapini”. Roman recipes for it still survive. Tiberius (the Emperor from 14 BC to 37 BC), who loved parsnip, scolded his son Drusius for eating too much Broccoli. Roman farmers called Broccoli “the five green fingers of Jupiter.”

The variety we now use has been grown in Calabria, Italy, since the Middle Ages. The purple variety, though, is older than this Calabrese variety.

As with many other things, Catherine de Medici of Tuscany is credited with introducing Broccoli to France.

Broccoli was introduced to England in 1720 as “Italian asparagus”. It become popular in North America in the 1920s with the arrival of Italian immigrants.

The Broccoli variety “Beneforte” was developed in Britain and released in 2011. It was developed to have raised glucoraphanin levels in it, which may help protect against heart disease and some types of cancer. Breeding work was done in Norwich, England, at the Institute of Food Research (IFR) and at the John Innes Centre, led by a Professor Richard Mithen.

In Italian, “brocco” is the word for “branch”, so “Broccoli” means “little branches” in Italian. Though Broccoli is technically a plural word, and it is treated as a plural word in Italian, in English we treat it as a singular noun. The singular, “broccolo”, is a different vegetable in Italian, though that is another entry altogether, as there is much confusion up and down Italy as to what vegetable exactly a “broccolo” is.

The Italians got their word “brocco” from the Latin word “brachium”, meaning a branch (or an arm).

This web site generates income from affiliated links and ads at no cost to you to fund continued research · Information on this site is Copyright © 2023· Feel free to cite correctly, but copying whole pages for your website is content theft and will be DCMA'd.
Tagged With: Italian Food, Roman Food