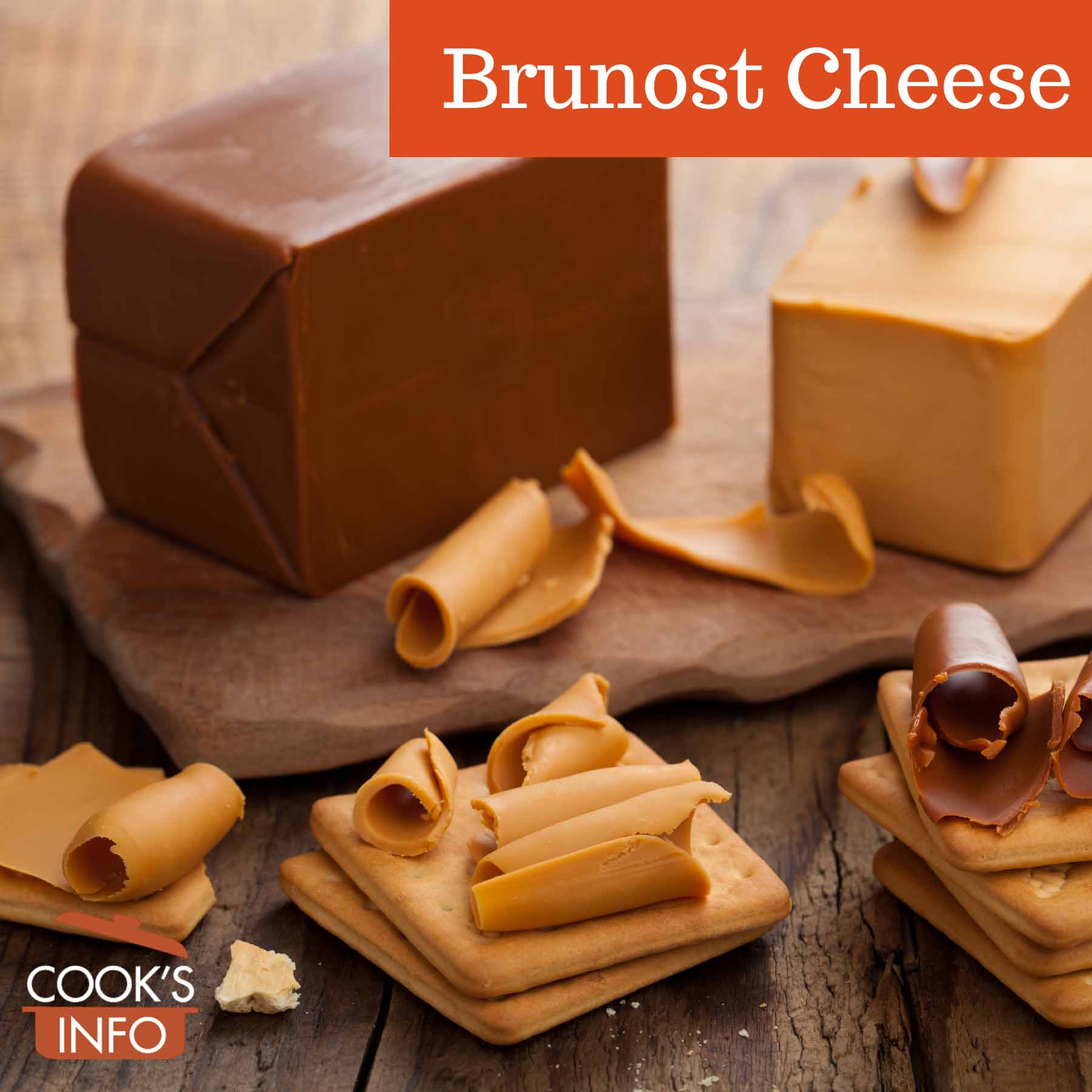 Brunost (meaning “brown cheese”) is a smooth, semi-firm cheese that is buff-coloured, like the colour of brown envelopes, with a sweet and sour caramel taste.

Made in Norway, Brunost cheese is 25% of all the cheese eaten there.

To make Brunost cheese, cream and milk are added to whey, and brought to a boil, then reduced to a simmer and stirred constantly for about 3 hours. The milk mixture thickens as water evaporates. While this happens, the lactose sugar in the milk caramelizes, and turns the whey slightly brown. Eventually the mixture becomes a light brown paste (literally).

It is then removed from the heat and stirred as it cools to keep it smooth and to prevent it from becoming granular (if you are attempting this at home, it needs to be whisked to stop the sugars from crystallizing.) Then it is poured into rectangular or round moulds, let set, then it is unmoulded.

It needs no aging; it is ready to sell as soon as it is unmoulded and packaged.

Brunost cheese can be eaten for breakfast, or with fruit cake. It slices very well.

Some people really dislike the taste and the texture.

Versions of brunost include:

Brunost cheese was traditionally made by boiling whey on its own. A woman named Anne Hov worked for a creamy in the Gudbrands valley in Norway. In the summer of 1863, she did an experiment of adding cream to whey before bringing the whey to a boil to create a fattier, more cheese-like product. Her improvement to the cheese caught on. Later, she tried the same thing with goat’s milk (goats being easier to rear in mountainous Norway.) In 1933, reputedly, at the age of 87, she received a medal (the “Kongens fortjenstmedalje”) from the King of Norway (who in 1933 who have been Haakon VII, a Danish prince) for her invention. If she were 87 in 1933, that would make her 17 when she came up with the idea in 1863.

In some sources, her last name is given as “Haav”.

This web site generates income from affiliated links and ads at no cost to you to fund continued research · Information on this site is Copyright © 2023· Feel free to cite correctly, but copying whole pages for your website is content theft and will be DCMA'd.
Tagged With: Norwegian Cheeses, Whey