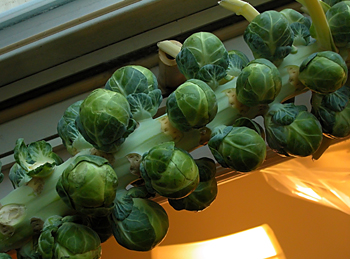 Brussels Sprouts are small, compact, leafy buds that sprout out along the stem of a variety of cabbage plant.

They grow best in temperate climates, ideally where the daytime temperatures are 18 C (65 F) or less. When the weather is too hot, the sprouts will remain loose tufts of leaves instead of developing into firm, small heads. In climates with hotter summers, they tend to be planted in mid to late summer so that the sprouts can develop as summer cools and autumn arrives, and the sprouts will be ready for late autumn or early winter harvesting — this is why in North America, they tend to make their first appearance around the time of Canadian Thanksgiving (mid-October.) Sprouts taste better after a hard frost.

Brussels Sprouts look like small cabbages, with a strong pronounced flavour that people tend to either love — or dislike. They can be boiled, steamed, microwaved, or roasted (braised, actually.) They are delicious with butter and nutmeg, or in a cream sauce or puréed.

In Britain, Brussels Sprouts are available fresh on 60 to 120 cm (2 to 4 foot) stalks, which are very picturesque. In North America, they tend to be sold loose.

Some people who like Brussels Sprouts say that they actually prefer the frozen ones in bags that can be purchased year round in the freezer section of grocery stores, because they generally cook up soft and sweet without developing a boiled cabbage taste and colour. However, you’ll find that you get the same good results when you cook your fresh Brussels Sprouts in a pressure cooker. 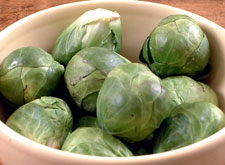 Before cooking, trim off any brownish outside leaves, and trim the “stump” off — it can be quite woody and prolong cooking times. Forget the old advice about cutting a cross in the bottom of each one. Not only was it just plain fiddly, it just made them all go soft and mooshy really fast. Forget as well any out-dated advice about cutting them in half.

Overcooking them is what brings out a strong, unpleasant flavour and mooshy texture. Undercooking isn’t desirable, either: they really need 8 to 10 minutes to develop their flavour.

If boiling, cook in boiling, salted water for 8 to 10 minutes or until tender to the fork. The larger they are, the longer this will take. Serve right away, or if you are using them mixed with something else, plunge into cold water to stop them from cooking further — this will also cause them to develop a beautiful, green colour. Reheat with the other ingredients as per your recipe.

Pressure-cooker: for small ones: fresh 4 minutes for firm, 6 minutes for soft; frozen 5 minutes. For large ones, 10 to 12 minutes.

High in Vitamin C. Good source of fibre and folate.

They won’t store well, so need to be either used within a few days of purchase, or frozen. To freeze, blanch for a few minutes, then freeze for up to 1 year.

To home can them, they must be pickled as there is no tested plain canning procedure from reputable sources.

The variety of cabbage grown to produce the most Brussels Sprouts has been bred and developed over the centuries. They seem to have been known in Northern Europe in the mid 400’s AD, and were being widely grown in what is now Belgium by the 1400s. They were popular because the small cabbages they produced could be harvested throughout the growing season, and more would sprout to take their place. Their cultivation spread throughout Northern Europe, and the French brought them with them when they settled in Louisiana. They became more widely popular after the First World War, when there was an increased emphasis on eating vegetables.

Brussels Sprouts did not become part of the British Christmas meal until the 1800s.

Their name comes from their first really making it onto European markets in Brussels in the 1400s.

This web site generates income from affiliated links and ads at no cost to you to fund continued research · Information on this site is Copyright © 2022· Feel free to cite correctly, but copying whole pages for your website is content theft and will be DCMA'd.
Tagged With: Sprouts