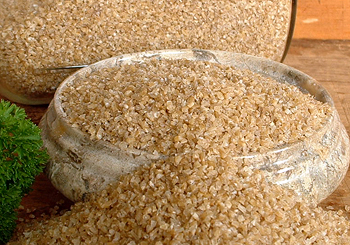 Whole wheat that has been soaked, steamed, and dried. Part of the bran is removed, then the wheat kernel is cracked into small pieces. This process develops a nutty taste and speeds up its cooking time. It can be bought either whole or cracked coarse, medium or fine (sizing is done through sifters, not by hand, in case you wondered.)

The precooking not only makes it quick to cook when used, but also helps to extend the shelf life.

Bulgur is convenient since it can be either soaked in water or cooked to be edible.

Its uses are numerous, from salads to soup, from breads to desserts. It is a nutritious extender and thickener for meat dishes and soups. Bulgur will absorb twice its volume in water and can be used in place of rice in any recipe.

It is used in Middle Eastern dishes such as tabbouleh and kibbeh. To add more flavour, you can use broth instead of water to soak and cook it in.

Cook 1 part of Bulgur in 2 parts of liquid for 15 to 20 minutes. Some recipes will also have you just soak it first in a hot liquid.

Bulgur stores well, as it has been precooked. Once cooked, you can store it for up to a day in the fridge — after that, it tends to go watery as it “weeps” the water that it had re-absorbed.

The Bulgurs were a Turkic people who lived on the upper Volga River.

This web site generates income from affiliated links and ads at no cost to you to fund continued research · Information on this site is Copyright © 2023· Feel free to cite correctly, but copying whole pages for your website is content theft and will be DCMA'd.
Tagged With: Eastern European, Eastern European Food