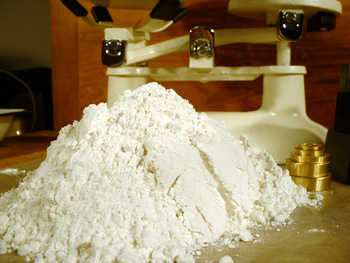 In production, the flour has at first a pale beige or yellowish colour. This is then lightened by bleaching it with chlorine.

The chlorine makes the flour slightly acidic, which makes the flour better able to absorb water, and enhances the ability of sugar and fat molecules to stick to the flour. This has the overall effect of “strengthening” the flour, allowing it to support better the weight of the sugar and fat in a cake, resulting in an overall finer, more even texture.

Cake flour is usually sold in smaller quantities than other flour is.

Some people say that using cake flour instead of all-purpose flour tends to keep cookies from spreading on cookie sheets (its lower protein content ties up less moisture making it available for steam production. Steam lifts the batter in the oven producing a fluffy, cake-like batter.) Other people say cake flour is usually too tender for cookies, and advise you to just use all-purpose flour or plain flour unless otherwise instructed.

These are the step-by-step directions from the University of Arkansas Cooperative Extension Service:

Step 3: Sift together TWICE. Sift into a mixing bowl once. Then run it through the sifter one more time. Sifting not only mixes the two ingredients together, it aerates the mixture, so the consistency is like real cake flour.

Step 4: Measure 1 cup from this mixture. You’ll have about 1 cup anyway, but sometimes sifting can produce more volume since it’s adding air.” [1]Due, Carla. What You Need to Know About Flour; Hint, It’s Not All the Same. University of Arkansas Cooperative Extension Service. Accessed January 2021 at https://www.uaex.edu/counties/miller/news/fcs/miscellaneous/What%20You%20Need%20to%20Know%20About%20Flour%20Hint%20Its%20Not%20All%20the%20Same.aspx

Flour marked as “Cake Flour” was sold in the United States as early as the 1920’s.

This web site generates income from affiliated links and ads at no cost to you to fund continued research · Information on this site is Copyright © 2023· Feel free to cite correctly, but copying whole pages for your website is content theft and will be DCMA'd.
Tagged With: Cakes, Wheat Flour