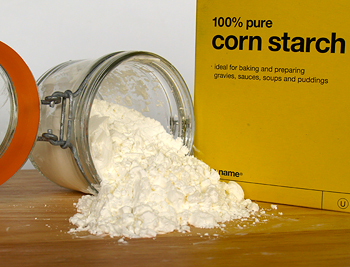 Cornstarch (called “cornflour” in the UK) is a fine smooth white powder, not yellow at all, made from the very centre of dried corn kernels (the “endosperms.”)

It has twice the thickening oomph that wheat flour does, but it can also have the same starchy taste as flour unless it is cooked a bit. It cooks up opaque.

Starch from corn contains substances known as phospholipids, which can have a bit of an after taste; if you need to thicken something delicate tasting, considering using tapioca or arrowroot starch instead.

Cornstarch is not considered kosher for Passover because it’s a grain, even though, being a New World food, it wasn’t one of the 5 grains originally forbidden during Passover. Rabbis have since “read it into” the list.

Corn syrup is made from cornstarch — enzymes are added to break the starch down into sugars. Starch is just a bunch of glucose molecules strung together.

Mix cornstarch first with cold water (equal amounts of each) before adding to a hot liquid, otherwise you will get lumps. Use 1 tablespoon per 250 ml of liquid (1 cup / 8 oz) unless your recipe advises otherwise. Mix the 1 tablespoon of cornstarch with 1 tablespoon of cold water, then add the rest of the water. Cook for at least a minute to get rid of the raw taste, but no more than three minutes, because past that it starts to break down again.

Don’t add anything acidic such as vinegar, wine or lemon juice, until after the cornstarch has thickened the liquid, or it won’t set.

When used as a thickener in a sauce, it creates a dull opaque sauce rather than a clear, glossy or solid looking one.

Cornstarch typically can perform poorly in home canning because of the processing times required; for that reason, a modified starch such as Cleargel or equivalent is usually recommended.

For fair-skinned people, a light dust of cornstarch is a good emergency substitute for concealer, particularly for dark circles under the eyes. Just rub on with the tip of a finger, then brush off lightly with a towel or brush.

1 tablespoon cornstarch has the same thickening power as 2 tablespoon of wheat flour.

Cornstarch will keep indefinitely at room temperature in a sealed container. Try not to use it in something you are planning to freeze, as it tends to lose its thickening powers when frozen. You may not think that matters while it’s all frozen solid, but you will when you thaw it.

Brown & Polson in Paisley, Scotland have been selling cornstarch since 1840. They call it “cornflour.” During the “Emergency”, as the Irish called the Second World War, a special act was passed setting the maximum price for Brown & Polson cornflour in Ireland at 5 pence a ¼ pound package.

It can also be spelled as two separate words (e.g. Corn Starch), but the one-word version is about 4 times more common.

This web site generates income from affiliated links and ads at no cost to you to fund continued research · Information on this site is Copyright © 2023· Feel free to cite correctly, but copying whole pages for your website is content theft and will be DCMA'd.
Tagged With: Corn Flours, Starch