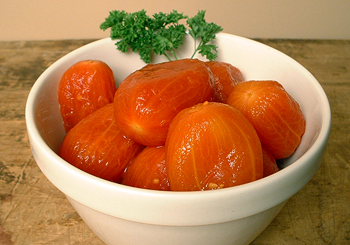 Tinned tomatoes can save you a lot of work, are usually cheaper than buying fresh tomatoes (except for those few crazy weeks in late summer when green grocers are practically paying you to take tomatoes off their hands), and are often far more flavourful than the tomatoes we get for the rest of the year (read: 98% of the year.) The reason is that because they are going to be canned, they can be allowed to ripen longer. Tomatoes destined to be canned as chopped tomatoes are allowed to ripen the most.

Consider always keeping tinned tomatoes on hand in large quantities. You can get them tinned whole, or tinned chopped. For most general cooking, it really doesn’t matter which you get, though you can always buy some of each. When they’re on sale next, consider doing a big stock-up, if you have the room.

For making large batches of spaghetti sauce or chili to freeze, you can get the huge “feed the Eastern European refugee trains” tins from big warehouses such as Costco/Price Club.

The only complication with tinned tomatoes is when recipes call for “1 can of tomatoes.” You might have no idea whether they mean a small tin or a large tin. You just have to wing it like the rest of us. Either guess ahead of time by weighing up in your mind what the proportions of the other ingredients are, or open the large tin, use as much as seems right to you, and toss the rest in a freezer bag and freeze.

If recipes call for a can of tomatoes, drained, drain the tomatoes into a bowl through a colander, and then add the juice to a small tomato juice bag or tub in the freezer for making various sauces with in the future. You could drink it, too, if you like tomato juice.

Most Canned Tomatoes used to come from Italy, in particular the brand named “San Marzano”, until in 1989 [1] the United States slapped a 100% tariff on Canned Tomatoes from Italy and Spain in retaliation for other EU measures. This had the side-benefit of encouraging American consumers to buy Canned Tomatoes from California. [2] If the imported tomatoes are canned in purée instead of sauce, the duty is lower, only 12.5%, because then they qualify as sauce products.

Their recommendation was to look for citric acid, calcium chloride, and packed in tomato juice on the label.

In North America, there are no expiry dates on tinned goods.

Some say canned tomatoes are good for two years; others say three years.

[1] “On January 1, 1989, the European Community placed a ban on meat imports from animals treated with growth inducing hormones. This had a direct impact on the U.S. beef industry, which uses hormones in more than half of the cattle sent to market each year. The ruling effectively blocked $140 million worth of American beef exports, during the first year. In retaliation of the ban, the United States initiated 100 percent tariffs on a range of agricultural products including canned tomatoes, fruit juices, and ham.” Trade Environment Database. American University, The School of International Service. Hormone Ban in EU Meat (EUMEAT), Case 160. Retrieved July 2011 from http://www1.american.edu/TED/eumeat.htm

[2] “Under this provision, the prepared tomatoes from Italy, classified under subheadings 2002.10.0020 and 2002.10.0080, HTS, is subject to a 100 percent ad valorem rate of duty.” United States International Trade Commision Rulings And Harmonized Tariff Schedule [1] http://www.faqs.org/rulings/rulings2005NYL86920.html