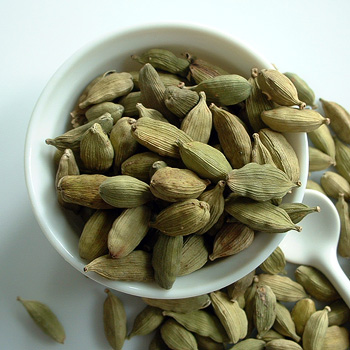 The Cardamom plant is a perennial herb belonging to the same family as ginger and turmeric — and it is a distant relative of the banana.

It has thick, stiff stems that grow directly out of the ground from underground rhizomes, and bend outwards. The plant can be propagated either from seed or by dividing the rhizomes. It likes to grow in shade, so a few tall trees are always left to grow amongst them. They grow to an average of 10 feet (3 metres) in height, and produce large leaves.

The plants will start producing in their third year. The stems that bear the flowers are separate from the ones that grow leaves. The plants start flowering in April or May and continue flowering until July or August. The flowers are small and white, with blue stripes and yellow borders. Each flower produces a fruit: the green cardamon pod, with each pod containing 8 to 20 seeds. The pods are ready to harvest 30 to 40 days after flowering. They are gathered just before they completely ripen; otherwise, they split open and release their seeds. If left too long, the pods will also turn yellow.

The pods are then put in drying sheds. These sheds have shelves for the pods, and a mesh floor up through which hot air comes. The drying causes the pods to lose 4/5 of their weight. Drying them like this causes them to stay green. Or, they can be dried in the sun, which will bleach them white.

The pods themselves are odourless and tasteless; it is the seeds that are tasty and nice-smelling.

Cardamom is native to tropical Asia, with the big producers there being India and Sri Lanka. The increase in demand in Cardamom has been a huge economic benefit to many small Indian towns, and you will find many Indian web sites devoted to the economic promotion of Cardamom. One particularly large growing district is Idukki (also spelled Idduki) in Kerla, southern India. Though India still produces 80% of the world’s Cardamom, most of the Cardamom that India produces is used inside the country. Guatemala, which transplanted Cardamom in 1920, is now the main exporting country. Indian growers, though, criticize Guatemalan growers, saying that they pick the pods too early.

Cardamom can be purchased in the pods, in seeds or ground. The pods are usually green and this is what you want: the tan-coloured pods have been bleached which impacts the flavour.Purists will of course tell you to buy Cardamom only in the pods, remove the seeds and grind them on the spot as needed. They are right: out of the pods it will lose its taste and aroma and become flavourless seeds or powder — but not overnight, and not even that quickly. Besides, one pod will generally yield about 1/6 teaspoon ground, so you will have your work cut out for you — especially when you just need to get on with putting dinner on the table. Unless you have your grinding mill out anyway because you were about to mill your own flour, a more practical alternative is to buy ground Cardamom in small quantities and keep tightly sealed out of the light. It should keep for up to 3 to 4 months. After that, if you have to sniff really hard to smell anything, discard it and get more. 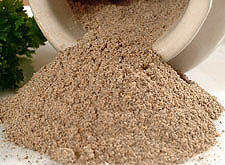 This is not to say don’t buy the pods. Do by all means. Toss them into the dishes you are preparing, but remove before serving just as you would bay leaves. They aren’t meant to be eaten; the pods will have the consistency of thick paper, and some people get quite cross with you when they chomp down on one unawares.

Many cultures use Cardamom as a mouth-freshener after meals. The dried herbs you are often offered upon leaving Indian restaurants contain Cardamom seeds. Arab countries are huge importers of Cardamom, as they use it to flavour their coffee.

Cardamom is used in the spice mixture called “garam masala.”

If you’ve never used Cardamom before, or only in curry dishes, try some when steaming rice. Just sprinkle some on when cooking brown or whole-grain rice, or tossing in a few pods when cooking white rice.

Cardamom was exported to Egypt 6,000 years ago from India. Greeks traded for Cardamom in the 4th century BC. Rome was importing huge quantities of it from India by the first century AD. In Egypt, Alexandrian tax collectors in 176 AD saw it as a safe candidate to slap import duties on, knowing that the demand wouldn’t diminish (rather like tobacco and alcohol taxes today.)

That being noted, academics doubt that what the Ancient world called “Cardamom” was the same as what we call Cardamom now. The Roman writer Pliny used the word to include four different spices; Dioscorides, the Graeco-Roman medical writer described Cardamom as “bitter”, which what we now call Cardamom is not.

By about the 700’s, however, the word was definitely being applied to the Cardamom we know today.

Cardamom is extremely popular in Scandinavian countries. This goes way back, being introduced by their friendly ancestors, the Vikings. There are various accounts of how exactly the Vikings introduced it: some have them discovering it on a trip to India, others are quite sure they schlepped rabbit furs down to the Southern Hemisphere specially to pay for it. It is more likely that familiarity with and fondness for the spice was picked up by those Norse who went to form the Varangian guard for the Byzantine emperors in Constantinople.

In more recent times, the Dutch had control of the trade, then the East India Company.

There are constant references to Cardamom Seeds in The Arabian Nights. There is an area in Cambodia called “Cardamom”, but that is unrelated to the spice.