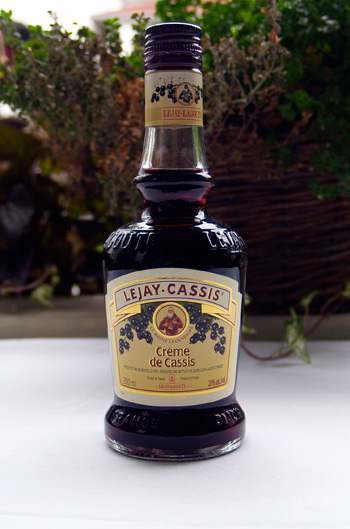 Cassis is a dark purple liqueur made from Black Currants and an alcohol, such as Rum or Brandy. It is usually used in a mixed drink, rather than drunk straight up.

There are many different brands of Cassis, including Mathilde and Marie Brizard.

Crème de Cassis is thicker than Cassis, more syrup like, and redder, almost like blood. It has more sugar added and so is very sweet.

In France, over 85% of Crème de Cassis is made in Dijon.

“Mons. L’Heritier-Guyot, of Dijon, exhibits samples of “Crème et Jus de Cassis.” These preparations are made from a species of black currant, Ribrx nigrum, the fruit of which attains great perfection as grown on the hills near Dijon, especially Fixin, Chanibertin, and Vongeot. The Crème de Cassis has somewhat the colour and taste of black currant, but with a milder, more aromatic, and less astringent flavour. This liqueur is said — and one can well believe it — to be serviceable and particularly strengthening in affections of the throat, doubtless partly owing to its astringency. It is taken sometimes alone, diluted with water, or, still better, in some aerated beverage; in this latter form it makes a very pleasant and refreshing drink, to be preferred in some cases, particularly in cold weather, owing to the alcohol it contains, to the fruit syrups which are so much used, especially in summer, in France. The sample of Crème de Cassis de Dijon we examined possessed a pleasant odour, with a rich and fruity taste, and may certainly be pronounced to be of excellent quality. The Crème de Cassis de Vougeot, made from the fruit grown on the hill of that name, is less sweet, and possesses more astringency; the jus, or juice, is free, or nearly so, from added sugar, and possesses in the most marked degree the aroma, taste, and astringency of the fruit from which it is prepared.” — The Lancet Analytical Commission, “Report on the Food Products exhibited in the French and English Departments of the Universal Exhibition of Paris”, The Lancet, September 21, 1878, p. 417.

This web site generates income from affiliated links and ads at no cost to you to fund continued research · Information on this site is Copyright © 2022· Feel free to cite correctly, but copying whole pages for your website is content theft and will be DCMA'd.
Tagged With: French Liqueurs