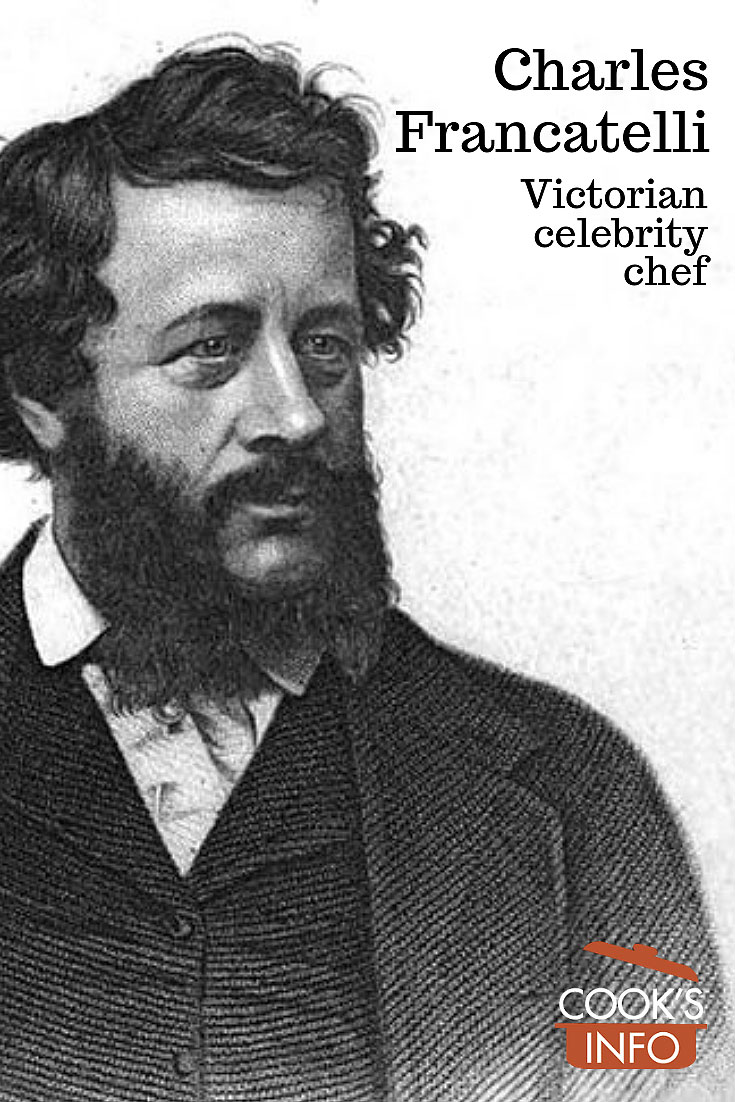 Despite his name and his French training, Charles Elmé Francatelli was English by nationality. He wrote several important cookbooks, and held in succession three of the most prestigious cooking positions in England at the time.

Francatelli was born in London in 1805, but grew up in France. His parents were Nicholas and Sarah Francatelli. [1]Gilbert, Lauren. Cook at Buckingham Palace: Charles Elme’ Francatelli. 31 January 2019. Accessed August 2019 at https://englishhistoryauthors.blogspot.com/2019/01/cook-at-buckingham-palace-charles-elme.html In Paris, he learnt cooking, getting a diploma from the Parisian College of Cooking, and working under people such as Carême. [2]”The Author…. received his professional education in Paris… and was so fortunate as to become a pupil of the renowned Carême.”…. The modern cook. Charles Elmé Francatelli. Philadelphia: T.B. Peterson and Brothers. ca. 1855. Preface, page 26.

Upon his return to England, he worked for various places such as Rossie Priory and Chesterfield House as “chef de cuisine” for the Earl of Chesterfield, and at Chislehurst in Kent for Sir Herbert Jenner-Fust.

By 4 February 1839, he was working as chef at Crockford’s Club in London, a gambling gentleman’s gambling club, taking over from its previous chef Louis Eustache Ude, who had just quit in a salary dispute at the start of February (Disraeli didn’t think much of Francatelli’s chances at following in Ude’s footsteps, but time was to prove him wrong.)

While at Crockford’s, he made the acquaintance of William George Hay, the 18th Earl of Errol. In November of 1939, Hay became the Lord Steward of the Queen’s Household.

On the 8th of March 1840, the chief cook at Buckingham Palace left his position. On Hay’s recommendation, Francatelli took his place the very next day. He was in this position from 9 March 1840 to 31 March 1842 [3]Account books of the Lord Steward of the Royal Household for 1840–42, National Archive, Kew, refs. LS 2/66, LS 2/67 and LS 2/68 as maître d’hôtel and “chief cook in ordinary.”. [4]”while in Her Majesty’s service as Chief Cook and Maître-d’Hôtel”…. Dedication in: The Modern Cook. Charles Elmé Francatelli. Philadelphia: T.B. Peterson and Brothers. ca. 1855.

Francatelli reputedly exhibited a chef’s temperament in the kitchens, which caused him to quarrel with the Chief Comptroller of the Household, a Mr Norton, and be suspended from his position. (Hay was not around to defend him, as he had left his Chief Steward position earlier on 30 August 1841.) He did return to work, but a three month notice was given (either by him or the Palace). He subsequently finished his work there on 31st March 1842. [5]Gilbert, Lauren. Cook at Buckingham Palace

“[Francatelli’s] treatise on gastronomy, published by Bentley, was alone sufficient to place him in the front rank of the scientific professors of the art. He was many years chef at Chesterfield House, when its dinners were the admiration of the gastronomic world of London. We subsequently trace him by his reputation to Rossie Priory (Lord Kinnaird’s), and to the Melton Club, or Reunion, of which Lord Kinnaird, Sir W. M. Stanley, Mr. Rowland Errington, Mr. Lyne Stephens, and the late Count Matuzavicz were the members. He succeeded Ude as maitre d’hôtel at Crockford’s, and was afterwards, through the discriminating patronage of the late Earl of Erroll, promoted to the honourable and enviable post of maitre d’hôtel and chief cook to the Queen. It is generally understood that his skill, zeal, and judicious economy obtained the full approval of Her Majesty and her Royal Consort; but what can such exalted personages know of the intrigues of the basement story of a palace? Or how can they be fairly made responsible for the heart-breaking humiliation and injustice that may be perpetrated by their authority? At the end of two years Francatelli was displaced, or reluctantly resigned, the victim (he doubtless believes) of some pantry, scullery, still-room, or steward’s-room cabal, and the Coventry Club was fortunate enough to possess him for a period. At present, if we are not misinformed, he is in the full enjoyment of the otium cum dignitate, and of a handsome competence to boot -— a circumstance at which we should rejoice more cordially did it not militate very seriously against the gratification of our palates.” [6]Hayward, Abraham. The Art of Dining; or, Gastronomy and Gastronomers. In: The Epicure. Issue 53, Vol. V. April 1898. Page 184.

He then returned to Crockford’s.

In 1845, while working at Crockford’s, he published his book “The Modern Cook” in England, and in America in the following year, 1846. The book sold well on both sides of the Atlantic. In it, he advocated two courses for meals — a savoury followed by dessert, which is how most everyday eating is done now.

He worked at Crockford’s until 1 January 1846, when the Club went out of business.

In June 1846, he began working as managing steward at the Coventry House Club. He was there from the day it opened, 1 June 1846, till the day it closed on 25 March 1854. [7]Gilbert, Lauren. Cook at Buckingham Palace

In 1852, he got the food company Brown and Polson to be a sponsor of his book, “A Plain Cookery-Book for the Working Classes.” In return, he gave Brown and Polson space for a large advertisement at the back of the book, and mentioned their products by name in several of his recipes.

Moves to the Reform Club

In late June or early July 1854, Francatelli became chef at the Reform Club, where Alexis Benoit Soyer had worked until 1850. Francatelli worked there for seven years. [8]”The title page of the 1867 edition of the  Cook’s Guide states that Francatelli stayed at the Reform for seven years, i.e. till 1861.” — Colin Smythe. Charles Elmé Francatelli, Crockford’s, and the Royal Connection. Accessed August 2019 at https://colinsmythe.co.uk/charles-elme-francatelli-crockfords-and-the-royal-connection

“Signor Francatelli . . . remained in the service of the Reform Club until 1861 or 1862, during which time he gave great satisfaction to the members. Unfortunately for the Club, he was dismissed by the Committee on a point of temper and not of efficiency, and because he attempted to act as the master and not as the servant of his employers.” [9] Charles Mackay LLD, Through the Long Day, or Memorials of a Literary Life during Half a Century, London: W. H. Allen, 1887, vol. II, p. 106. Cited in: Gilbert, Lauren. Cook at Buckingham Palace 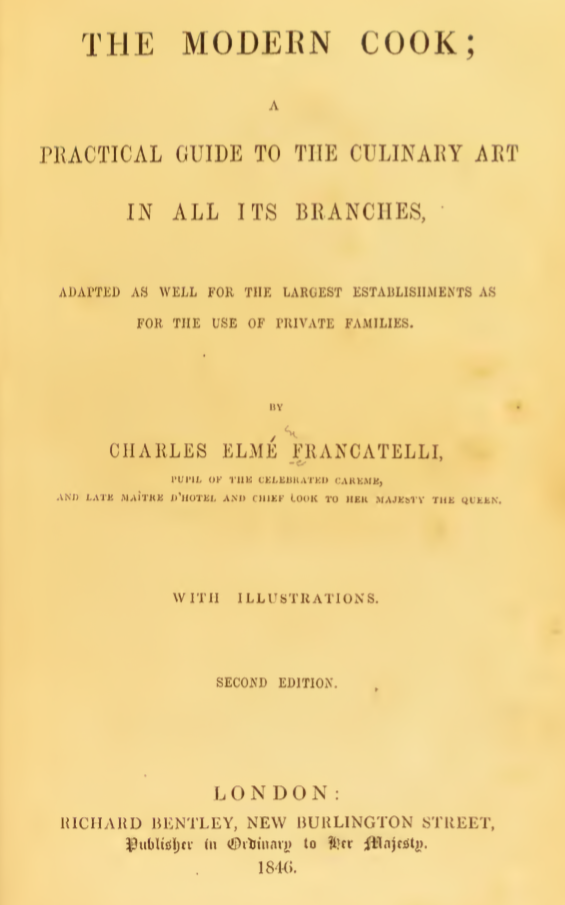 (1) A younger relative (cousin?) Laura Mabel Francatelli (c. 1880 or 1881 – 2 June 1967), survived the Titanic. She was travelling as secretary to Lady (Lucy) Duff-Gordon, a fashion designer at the time, who also used a sister of Laura, Phyllis Francatelli, as a model. She is sometimes identified as his daughter but this appears to be mistaken.[ref/Colin Smythe. Charles Elmé Francatelli, Crockford’s, and the Royal Connection. [/ref]

(2) Liebig’s Extract of Meat company carried a posthumous endorsement from him in an 1889 brochure the company put out, quoting him as saying “The very soul of cookery is the stockpot and the finest stockpot is LIEBIG COMPANY’S EXTRACT of MEAT”.

The brochure attributed the quote to “Francatelli, Chef de cuisine of the late Emperor of the French”.

It’s not certain which “Emperor” they are referring to: Napoleon the first who resigned in 1815 when Francatelli was 10 years old; Napoleon II who reigned as an infant for a few months in total during 1814 and 1815, or Napoleon III (crowned in 1852; deposed in 1870.)

After Napoleon III was deposed, he and his wife Eugenie lived in England. He died at Chislehurst on 9 January 1873. It may have been while at Chiselhurst that Francatelli cooked for him, or perhaps, during Napoleon’s much earlier stay in England between 1838 and 1839 at the Royal Leamington Spa in London, he happened to dine at Crawford’s where Francatelli worked at the time. In either event, to have said that Francatelli was “chef de cuisine” for Napoleon would have been advertising hyperbole at its best.

“Over the mantelpiece was … a large framed photograph of Francatelli, that immortal chef whose memory is kept green in so many kitchens, and whose recipes are still followed as are followed the footprints of the great ones in the Everlasting Sands of Time.” — from Hichens, Robert Smythe (English author. 14 November 1864 — 20 July 1950). The Prophet of Berkeley Square. Chapter 9. 1901.

“The palate is as capable and almost as worthy of cultivation as the eye and ear.” — Francatelli.

“I wish you were as gourmand as I am; I wish you could have had some of the delicious white soup I made, or rather caused to be made for the club last week. I shall not tell you anything about it, I’m sure I should not make your mouth water if I did. I believe you could read Francatelli right through from beginning to end without being moved in the smallest degree.” — Miss Eliza Mary Ann Savage (1836 – February 1885) in a letter to Samuel Butler (1835 – 1902). January 1877.

“What a failure that special grand dinner was! How those dreadful occasional waiters did break the old china! What a dismal hash poor Mary, the cook, made of the French dish which she WOULD try out of Francatelli!” — William Makepeace Thackeray (English author, 1811 — 1863). Roundabout Papers. Published 1860 to 1863.

In Season 2, Episode 4 of Lords and Ladles (filmed at Hilton Park, broadcast October 2016), chef Paul Flynn receives an order of cockscombs and turkey testicles for an 1880 Charles Elme Francatelli recipe. 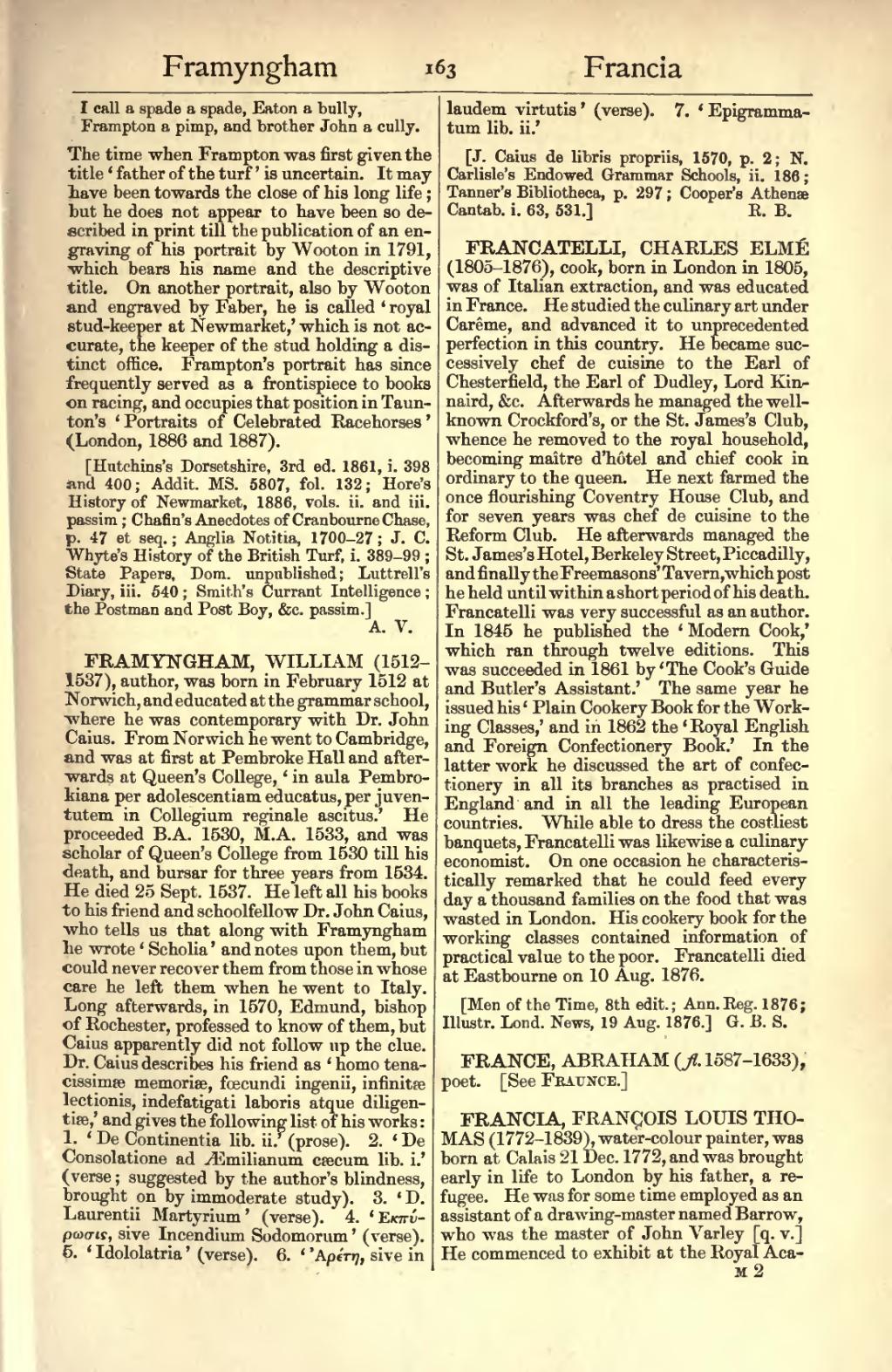