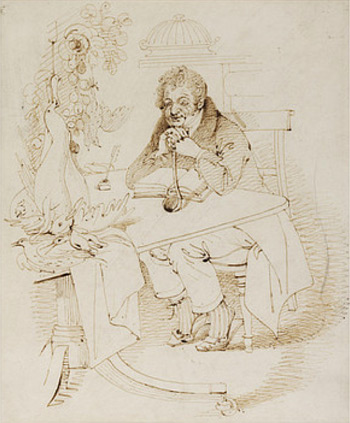 Not only vain, but intolerant of being crossed. Once, Eustache was hauled into court in London for serving grouse in the first week of August, before the legal start of the grouse season on the 12th of August. Appearing in court the day after the offence, he was given a small fine and an admonition. Later that day, the indignant Scottish laird who had reported him appeared again at the club to eat. He scrutinized the menu to make sure that the forbidden bird of the day before had been removed from it. It had been, and satisfied, he decided to order something new on the menu in its place, called “Salami de fruit défendu.” (Salami of forbidden fruit.) The “forbidden fruit” in the salami that the laird was served turned out to be grouse.

Eustache’s father had worked in the kitchens of Louis XVI, where he also got Eustache work as an apprentice. But the young man wasn’t interested in cooking at the time, and so left to work for a jeweller, then an engraver, then a printer, then worked as a travelling salesman for a silk company from Lyons, then as an “agent de change”, and then for a gambling house. Still, none of these jobs held his interest.

Finally, he returned to his training, working for Napoleon’s mother, Princess Maria-Letizia (aka Letitia) Ramolino Bonaparte (24 August 1750 — 2 February 1836 ) as “maître d’hôtel” for her for 2 years. He then left France for England, where he would spend the rest of his career.

Arriving in England, he went to work for William Philip Molyneux, the 2nd Earl of Sefton (1772 to 1838) at Croxteth Hall, Liverpool, and stayed with the Earl for nearly 20 years. The Earl was a renowned epicure. He also liked hunting, gambling, coursing (greyhounds chasing after hares), and steeplechasing. Parts of his lands were organized to encourage hares and pheasants to proliferate.

During this time, he published his cookbook now know as “The French Cook”, in 1813.

The Earl paid him handsomely — 300 guineas a year. When the Earl died, he even left Ude 100 guineas a year in his will. Eustache only quit working for the Earl because, reputedly, the Earl’s eldest son (Charles William Molyneux, 3rd Earl of Sefton, 1796 to 1855), put salt in a soup that Eustache had made.

Upon the Duke’s death in 1827, Ude was hired to be the first chef at Crockford’s, a private (and also illegal gambling) club opened in that same year at 50 St James Street by a William Crockford (1775 to May 1844). His starting salary was 1200 pounds a year. He served dinner at Crockford’s from 4:30 pm to 6pm. [Ed: See also the biography for Charles Elmé Francatelli, whom Ude replaced at Crockford’s.]

One year at Crockford’s, in the first week of August before the legal start of the grouse season, Ude served grouse: members dining there that day happened to include the fifth Marquis of Queensberry, from Scotland, who was outraged that Ude was breaching the law, and reported Ude to the police. Ude appeared in Bow Street court the next morning after the offence, and was given a small fine and an admonition. Later that day, the Marquis of Queensberry appeared again at the club to eat. He scrutinized the menu to make sure that the forbidden bird of the day before had been removed from it. It had been, and satisfied, he decided to order something new on the menu in its place, called “Salami de fruit défendu.” (Salami of forbidden fruit.) The “forbidden fruit” in the salami that the laird was served turned out to be grouse.

Ude stayed at Crockford’s for 12 years, until 1839, when he quit at the at the start of February over a salary dispute. He was succeeded there as chef by Charles Elmé Francatelli. Crockford himself retired from the club the next year, in 1840. The club continues today (2012) as a private club re-named “Fifty St James.” [1]

Eustache found work at the United Service Club-House on Albemarle Street. In 1841, in the 14th edition of “The French Cook”, he describes himself as now being “Projector of the original coffee-room held in the United Service Club-House in Albemarle Street.” Sometime before this, he had re-titled the book as “The French Cook: a system of fashionable, practical, and economical Cookery, adapted to the use of English families.” In the prefaces to his book (at least this 14th edition in 1841), he says he had worked for Charles X of France (reigned from 1824 – 30), but during that time he was actually working for the Duke of York and Crockford’s.

In his book, he gives his advice for proper sandwich making — no doubt from experience of feeding men who didn’t want to be interrupted at their gambling long enough to formally dine. His recipe for Turtle Soup was considered so good that Mrs Beeton stole it.

Eustache died on 10 April 1846, aged 77. He was living on Albemarle Street, London at the time. He was buried at Kensal Green Cemetery, London, where the chef Alexis Soyer is also buried.

“The fanciest gambling den in London in the first half of the century was Crockford’s in St James’s Street, founded in 1826 by a retired fishmonger. Crockford ensured that his club, apart from being a place where the rich could lose their shirts in decent privacy, in all other aspects resembled the best gentlemen’s club: it was exclusive and had a good chef. Indeed, it even laid on special late supper hours during the parliamentary season, when an exhausted legislator could stagger up the road from the Houses of Parliament and be refreshed at any hour from midnight to five in the morning.” — Flanders, Judith. The Victorian City. London: Atlantic Books. 2012. Page 349.

“There has been a row at Crockfords and Ude dismissed. He told the Committee he was worth 4000 pounds a year. Their new man is quite a failure, so I think the great artist may yet return from Elba. He told Wombwell, that in spite of his 4000 a year he was miserable in retirement; that he sate all day with his hands before him doing nothing. Wombwell suggested, the exercise of his art for the gratification of his own appetite. “Pah”, he said. “I have not been into my kitchen once: I hate the sight of my kitchen. I dine on roast mutton dressed by a cookmaid”. He shed tears, and said that he had only been twice in St James Street since his retirement, which was in September and that he made it a rule never to walk on the same side as the Clubhouse. “Ah I love that Club, tho’ they are ingrats. Do not be offended Mr W. if I do not take my hat off to you when we meet, but I have made a vow that I will never take my hat off to a member of the Committee.” — Benjamin Disraeli to Sarah Disraeli, Monday, 4 February 1839. [Ed. Disraeli’s “new man” was Francatelli. Francatelli in fact would go on to be as celebrated as Ude was.]

“Many people rail against attributing much importance to the pleasures of the table; but it is not observable that these moralists are more averse than others to gratification of the palate when opportunity occurs.” — The French Cook”, 1813.

E. H. Coleridge may have been the first person, in print at least, to notice that Lord Byron seemed to have a copy of Ude’s book. In stanzas 62 to 74 of “Don Juan Canto Fifteenth”, there are innumerable references to recipes which appear in that book. Most of the recipe names which Byron drew on, however, appeared prominently on the illustrated plates at the front of the book, showing that he may have got no further into it than he needed to.

“There was a goodly “Soupe à la bonne femme” —
Though God knows whence it came from -– there was, too,
A Turbot for relief -– of those who cram;
Relieved with a dindon à la Périgueux;
There also was – the Sinner that I am!
How shall I get this Gourmand stanza through?
Soupe à la Beauveau, whose Relief was Dorey –
Relieved itself by Pork, for greater Glory.” (Stanza 63).

Here are the two recipes he’s alluding to, both of which appear on illustrated plate number 2 at the start of the book:

Lord William Pitt Lennox. Drafts on my memory: Men I have known, things I have seen, places I have visited. London: Chapman and Hall. Vol II. 1886. (Chapter IX).