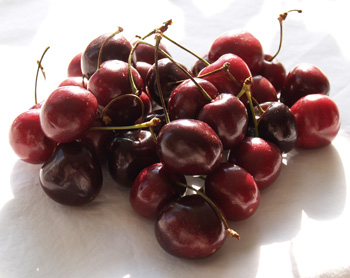 Cherries
© Denzil Green
Contents hide
Cherries are a member of the rose family, along with peaches, plums, apricots, and almonds.

Cherries have to be hand-picked because they bruise so easily. They have to be refrigerated immediately and sold within days if they are to be eaten fresh (as Sweet Cherries would be.) Cherries are one of those fruits that won’t ripen after they are picked, so only choose immature ones if you are planning to do preserving with them and want the extra pectin that unripe fruit can have.

When buying Cherries, choose plump ones with good colour for their variety (not all are red!.) Sweet Cherries are firm when ripe, Sour Cherries will be slightly soft (not mooshy or leaky!.) Sour Cherries are almost always sold processed because they don’t ship well. Cherries with stems on them will actually store longer. When the stem is removed, it leaves a hole that lets air in (an exception is Balaton Sour Cherries.) Avoid Cherries with bruises.

There are over 1200 varieties of Cherries in the world now. Germany produces the most in the world, followed by the US. In France, the three most popular varieties are Belge, Burlat and Summit.

Producers prefer trees that grow shorter, because they can be mechanically harvested. Tall Cherry trees have to be harvested manually with people climbing ladders.

The pH value of cherries varies greatly; it’s probably for this reason that tested home canning recipes for jams and preserves using cherries call for the addition of bottled lemon juice, to ensure the final pH of the product is lower than the safe maximum of 4.6. 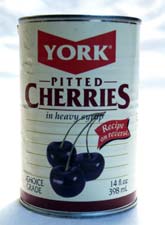 If you aren’t sure if you have a Sweet or a Sour Cherry, just bite into it to find out.

You don’t really need a cherry pitter; you can use a straw instead to push the pit out. A good model of cherry pitter, however, can indeed make the job much faster.

When using cherries in baked goods (such as cakes, muffins, etc), replacing some of the milk in the recipe with buttermilk or sour cream will help preserve the colour.

Drain canned cherries before using; oftentimes your recipe will have you thicken the drained juice with a thickener such as corn starch or arrowroot, and use it in the recipe. If not, you can freeze the juice for future use.

A Greek way of serving cherries is “icing” them. Wash the sweet cherries, but leave their stems on, and then put them in a bowl, add ice cubes, and toss gently. As the cherries chill, they will swell a small amount, and their flavour will intensify. Serve the cherries right in the bowl of ice and let people pick out the ones they want. Brilliant on a hot summer day.

Discard or use up any with broken skins. Store unwashed in a plastic bag or loosely covered bowl in your refrigerator (some say cover the bowl with a piece of paper towel).

Cherries with their stems on are generally more expensive, but they seem to last longer in the refrigerator.

To freeze, wash, remove stems, pack in freezer bags and freeze for up to a year for cooking use later.

The Greek writer, Theophrastus (372 – 272 BC) was the first to make written mention of Cherries. In his ‘History of Plants’, he said that Cherries had been cultivated in Greece for hundreds of years.

The Roman general Lucullus (110 – 57 BC) had Cherries while he was stationed in Asia Minor. He liked them so much, he brought them back with him to Europe. Chances are, though, that his like for them merely helped popularize them: Cherries were already known in Italy before then. The Romans introduced them to Britain in the first century AD, and throughout Europe.

The Romans grew kinds of Cherries; Pliny the Elder mentions 8 varieties. The three most popular they called Apronians (sweet, bright red Cherries), Caecilians (round but flattened on the end, and Lutatians (which were quite dark).

Wild Cherries already existed in North America before the colonists arrived; the natives used them to jazz up their pemmican. When the French arrived, they planted European Cherries along the St Lawrence River and down into the Great Lakes area and into areas such as we now know as Detroit. The Wild Cherries cross-pollinated with the domesticated ones brought over, and new varieties emerged.

Michigan turned out to be the ideal place to grow Cherries. The Great Lakes climate moderates the temperature extremes year round. Cherry production began there in the 1800s with a Presbyterian minister, Peter Dougherty, and today Michigan produces most of the Cherries grown in the world.

The most popular North American Sweet Cherry, the Bing, was developed by an Oregon farmer, Seth Luelling, in 1875. He named it after his foreman, who was Chinese.

The cherry trees in Washington, DC, are Japanese Ornamental Cherry Trees (“Prunus serrulata” 1 ), which rarely bare fruit and when they do, it’s not harvested for eating. In 1885, a Mrs Eliza Ruhamah Scidmore, a vigorous society woman who had been to Japan, began a 25 year long campaign urging authorities to beautify the Potomac waterfront with Japanese Cherries. By April 1909, she had the attention of the President’s wife, First Lady Taft, who went to work through connections with the Japanese consul. The City of Tokyo donated the trees. The first batch of 2,000 Cherry trees arrived in Washington, DC, in early January 1910 — but unfortunately had to be destroyed, as it was discovered that along the way they had picked up infestations that might spread to American Cherry trees. The next batch were healthy, though. 3,000 more trees arrived from Tokyo in March 1912. During WWII, the trees were referred to as “Oriental Cherry Trees”. In 1952, Washington shipped budwood from its trees back to Tokyo, to help restore the parent grove which had fallen into decline during the war. Japan made a further gift of another 4,000 trees in 1965, this time care of Lady Bird Johnson.

Thank you very much for your suggestion about the cherry trees. I have taken the matter up and am promised the trees, but I thought perhaps it would be best to make an avenue of them, extending down to the turn in the road, as the other part is still too rough to do any planting. Of course, they could not reflect in the water, but the effect would be very lovely of the long avenue. Let me know what you think about this.

George Washington didn’t really cut down a Cherry tree. That story was invented by a writer named Parson Weems.

Cherries Jubilee was invented by the famous French chef, August Escoffier, for Queen Victoria’s Diamond Jubilee. Back then, the dish was extra special, as Cherries were only available fresh for a brief season each year.

“So we grew together, Like to a double cherry, seeming parted, But yet an union in partition.”
— Helena to Hermia, A Midsummer Night’s Dream. Act III, Scene II. Shakespeare.

This is an old children’s nursery rhyme, of which there are many variations, that can also be used as a game you play with cherry pits. You save the cherry pits from the cherries you have eaten, and then count through them reciting the rhyme. The occupation that you end on was supposed to tell you what kind of person you would end up marrying.

Our word “Cherry” derives, via a long and winding trail, from the ancient Greek word for Cherry, “kerasos”.