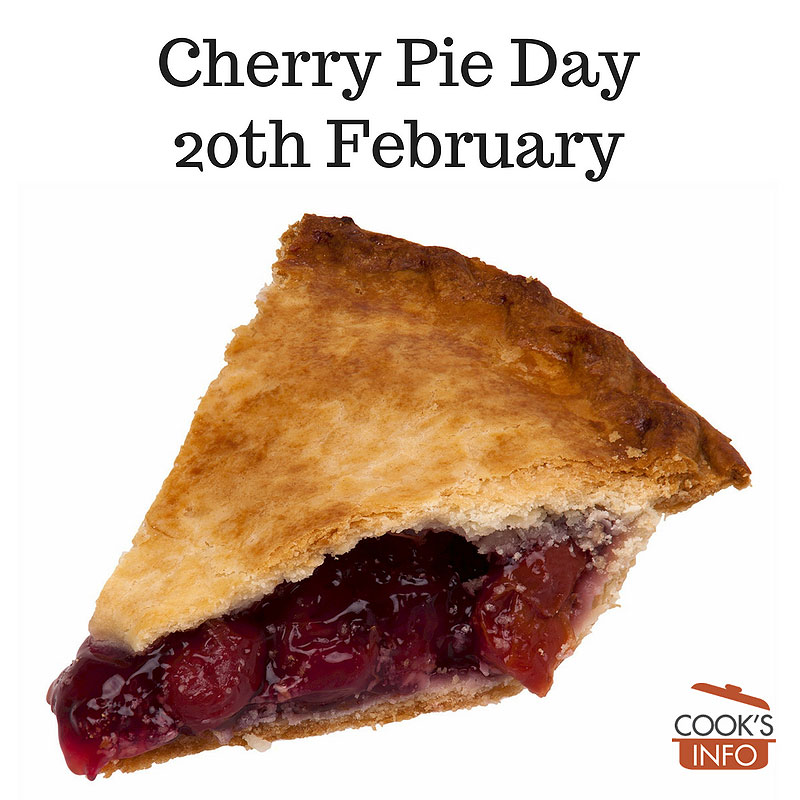 Cherry Pie Day is the 20th of February.

Some eager sources try to pronounce the whole entire month of February as Cherry Pie Month, but surely even the most enthusiastic fans would blanch at the thought of a whole month of cherry pies.

Even if you don’t have time to make a cherry pie today, or have the chance to be somewhere where you can get a slice for lunch or dinner, it’s still a good day for you to brush up on your cherry knowledge. Most people know that the cherries you use for pies are very different from the ones you would pop in your mouth while your green-grocer isn’t looking, but what are the differences, exactly?

Given that the following day, the 21st, is President’s Day in the US, you could dedicate your cherry pie to George Washington (even though the whole cherry tree thing is a myth.)

See our entries on cherries, sour cherries and sweet cherries (and hint, it’s the sour ones you want for the best pies.)

People didn’t start consistently mentioning Cherry Pie Day as being on the 20th of February until the 2010s. There is clear evidence for almost a hundred years before that that the original date was the 22nd of February, and that there was an actual, clear reason for that particular date (which is otherwise rare for these made-up food holidays.) The reason was that it corresponded with Washington’s birthday.

We’re not clear on the reason for the move; it may have simply been a mistake, or someone making a list of days being ignorant of an established date already existing, or a misunderstanding on the part of someone. Or, for secret reasons. In any event, it got perpetuated, and spread, displacing the actual date.

One of the earliest pieces of printed evidence CooksInfo has found for a Cherry Pie Day in February is in a small grocery store advertisement from California in 1924. It gives the 22nd as the date:

“Cherry Pie Day —Washington’s birthday is cherry pie day, and in keeping with the spirit of the occasion a large display of red, sour pitted cherries from New York, Colorado and Washington, known as ‘pie timber’, is a special feature at the Enterprise grocery on South Greenleaf Avenue.” — Advertisement in: The Whittier News. Whittier, California. 22 February 1924. Page 5, col 3.

Here’s a grocery store ad from 1938, saying that Tuesday, 22 February 1938 would be National Cherry Pie Day. 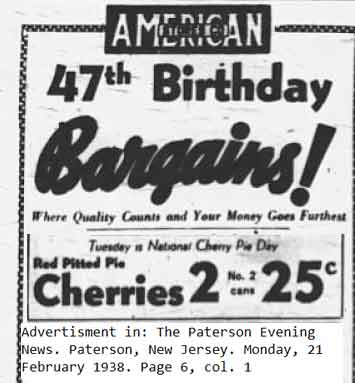 Here’s another example of the 22 cents cherry pie on the 22nd: 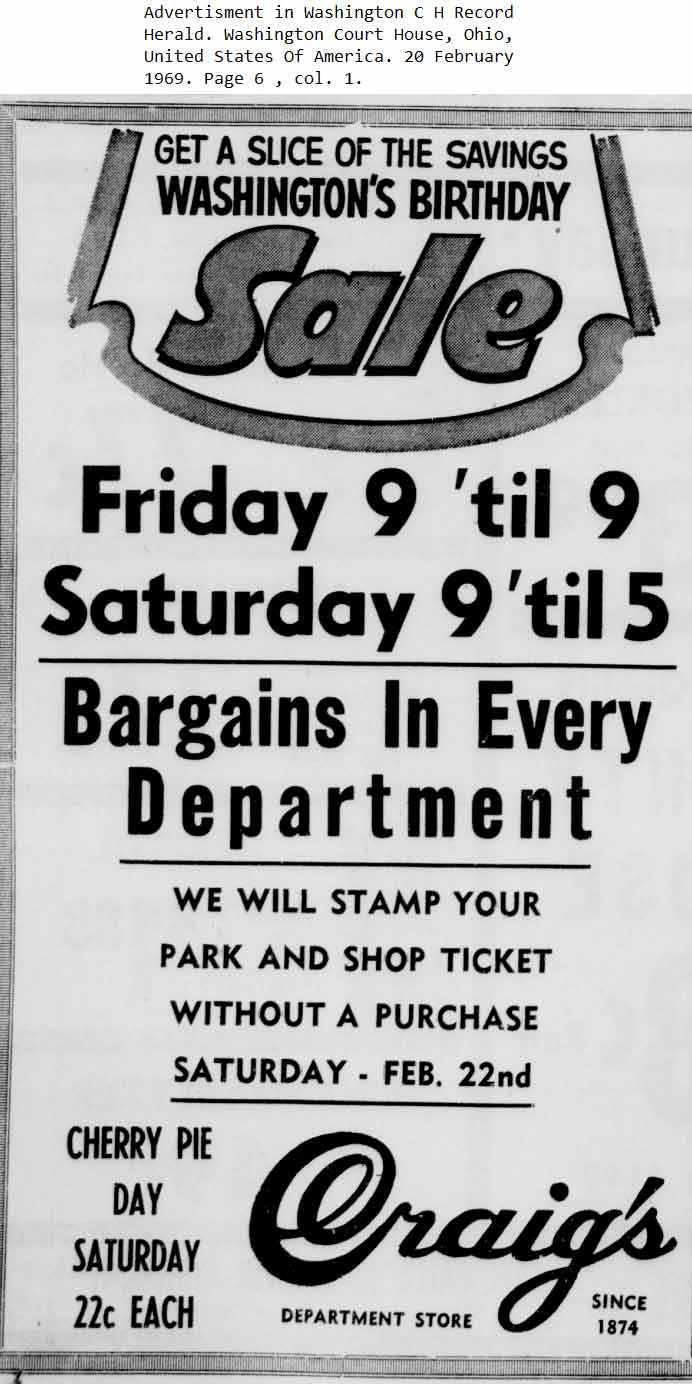 We’re not certain if these stores gave you a slice for 22 cents, or the whole pie!

The association between Cherry Pie Day and Washington’s birthday was still strong going into the 1980s.

“Every day is cherry pie day, and February 22 is the day when you simply must eat pie in honor of George’s Birthday.” (Women’s News. Oklahoma City, Oklahoma: The Sunday Oklahoman. Sunday, 20 February 1983. Page 16, col. 3.)

In 1985 (note: pre public Internet days), there was an early mention of Cherry Pie Day being celebrated on the 20th of February by the Future Farmers of America (FFA):

A few years later, though, another FFA group still held to the 20th of February:

By the early 2000s, mention of an association with the 20th of February begins to appear in archive searches more frequently:

By the 2010s, the result hits that CooksInfo is seeing in newspaper archives shows that the date seems to have decidedly moved to the 20th of February. 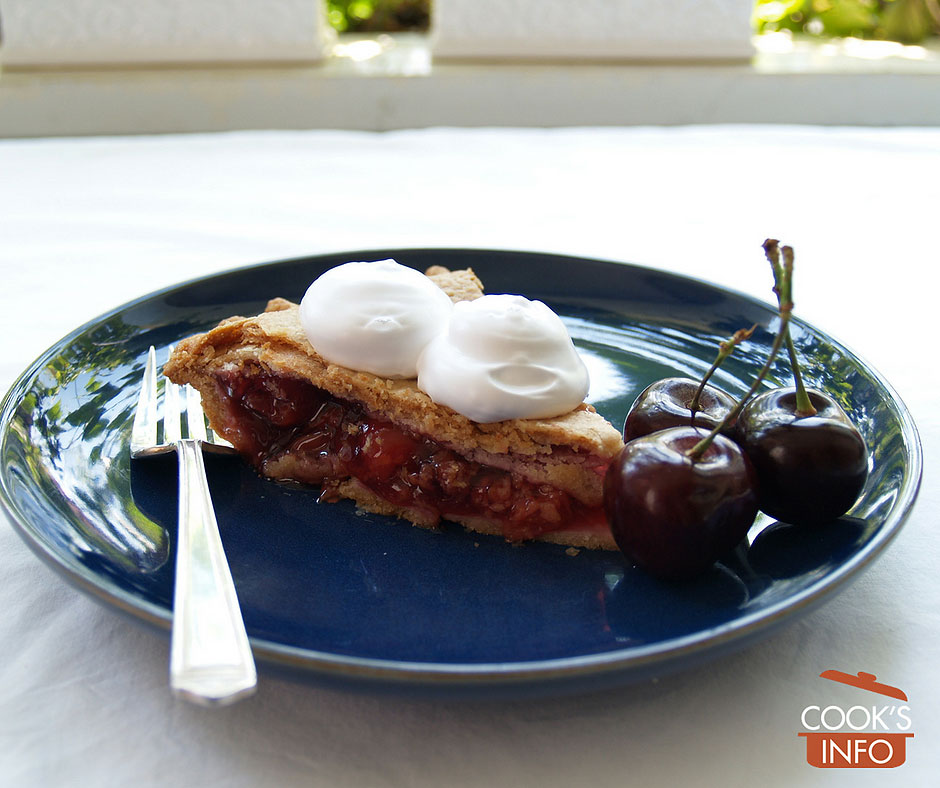