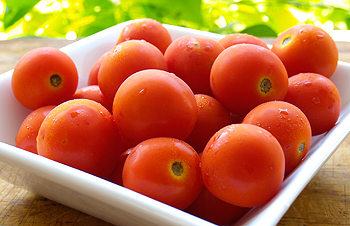 Cherry tomatoes are very small, sweet tomatoes, generally an inch (2.5 cm) or less in diameter. They usually grow in clusters on the tomato plants.

There are both yellow and red varieties.

They are used in salads, appetizer platters, on skewers for barbequing and on pizzas and flatbreads, etc. They are too expensive, and too fiddly, however, to use in mass quantities for making sauces, soups, etc.

Some of the most highly-rated varieties, such as Sweet Baby Girl, never reach market as they are too soft to stand up to shipping, and so are available only to the home gardener. 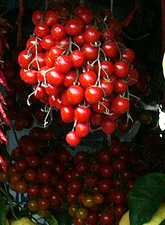 While we tend to think of large, red tomatoes as the norm, the first tomatoes to reach Europe were neither large, nor red. These have been developed through selective breeding.

The first tomatoes to reach Europeans, rather, would have been the size of Cherry Tomatoes.

The direct ancestor of our tomato, the “cerasiforme” variety, still grows in the wild in Central America, producing Cherry Tomato sized tomatoes on a vine.