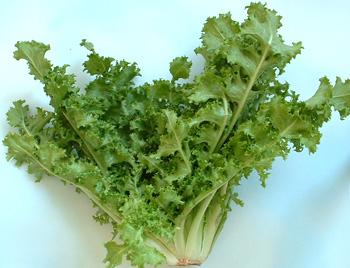 There is a fair bit of confusion about what Chicory is. All types of Chicory are a member of the Endive family. They can be annual or biennial plants.

After that, the confusion begins.

Chicory as a green leafy veg in its own right

Sometimes the curly version of endive is also called chicory by retailers.

The Chicory that is used as a coffee additive or substitute is the dried, powdered root of a chicory variety, different from the salad varieties, which is cultivated more for its large tap roots than it is for its leaves — just as sugar beets are grown for the beets and not their leaves. France and South Africa are large producers; in North America this plant is considered a weed. After harvesting the roots are roasting, which converts the carbohydrates in the root to a caramelized sugar, which makes it brown and gives it a coffee-like flavour. The discarded leaves are very bitter, but they can be fed to animals, or blanched to use as a salad veg. Roots of other varieties of Chicory have been used from time to time, but this is the preferred one.

The Egyptians, Greeks and Romans all grew and ate chicory leaves.

Chicorium Intybus, var. sativum: the variety of chicory grown for its roots. In French, they call it “chicorée à café”;

The French tend to call the small, white chicory “endive”.

This web site generates income from affiliated links and ads at no cost to you to fund continued research · Information on this site is Copyright © 2022· Feel free to cite correctly, but copying whole pages for your website is content theft and will be DCMA'd.
Tagged With: Ancient Egypt, Ancient Greece, Chicory, Roman Food