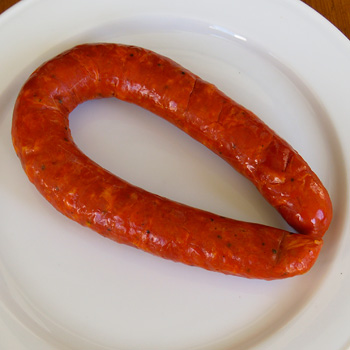 Contents hide
Chorizo is a Spanish sausage that is hard like pepperoni, but the ingredients in it are more coarsely processed. It has a very pronounced, hearty, spicy flavour.

It is usually made from the shoulder meat and the fat from a pig, aiming for a ratio of 70% meat, 30% fat. The meat and fat are ground, then mixed with paprika, garlic, sherry and black pepper, and allowed to marinate overnight. The sausage meat is then pressed into casings that are tied off, then hung and cured for a few weeks to 4 months. Some versions are smoked as well, others are just air-dried. The ones that are smoked will be very smoky tasting.

Details of the process can vary by region. Some makers add oregano, nutmeg and spicy peppers in addition to the paprika. Paprika is a recent addition, historically speaking — it came with the arrival of New World foods. A lot of paprika is used; it’s about ⅕th of the weight of the ingredients. Some versions, called “White Chorizo”, are still made without paprika.

It comes in two shapes, long and thin, or short and wide.

The long ones don’t need cooking. You serve the sausage as it comes, cut into thin slices. They are about 12 to 16 inches (30 to 40 cm) long. They are made using the large intestines as casings, and are cured by hanging for 3 to 3 months. Charcoal fires often assist in the drying. They have a firm, hard texture. If you buy already it sliced in packages, bring to room temperature first before serving. If you have a whole sausage, cover the cut end with tin foil to stop it from drying out. Store this version of Chorizo in a cool place, but preferably not in the refrigerator (sic) as the dryness of the refrigerator will shorten the storage life of the sausage

Small ones (2 to 8 inches / 6 to 20 cm) must be cooked. They are made using the smaller intestines as cases. They are cured for 2 to 4 weeks, either in a cool place, or smoked. Softer than the large ones, you use them as an ingredient in dishes.

You can buy it whole, or cut in pieces.

Versions are also made in South America. In Uruguay, for example, Chorizo is not spicy but is very salty with a lot of garlic in it.

A little Chorizo goes a long way. You can think of it as you would smoky bacon, as being something you add to a dish for the taste. To use, you slice it up or chop it up finely. When you’re cooking with it, the fat will come out and act as the fat for frying with.

Try substituting a spicy, smoked Italian meat, adding some paprika if needed to make up for the spiciness of Chorizo and perhaps a dash of liquid smoke. Not Mexican Chorizo, which is raw and requires cooking.

Import into the United States was only allowed from one manufacturer at first in 1997, then opened up more widely in 2002.