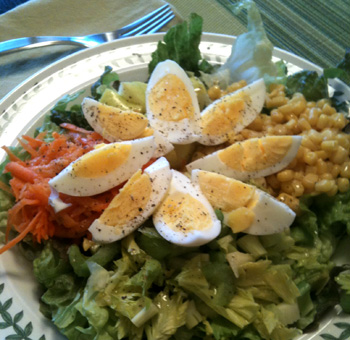 In tossed salads and bound salads, all the ingredients are mixed together.

A composed salad, by contrast, is a plate or a platter on which the various parts of the salad are laid out separately, usually on a bed of green salad leaves for visual appeal. Both raw and cooked items can be used.

One section of the platter might have grilled chicken, shrimp or cheese pieces laid on it, another might have chickpeas or grilled vegetables, another some chilled pasta, another some olives, sliced peppers, etc. Cooks usually aim for a variety of colours for visual interest, and textures.

Every item that is going to want dressing on it gets tossed in the dressing first before being laid out.

Composed Salads look like a complete meal, so are of more visual interest to men — you just have to watch out for the hogs who help themselves only to the grilled chicken and shrimp on the platter and leave the section of radishes untouched for everyone else.

A salade Niçoise is a composed salad. A chef’s salad was originally as well, except it came to be done in layers in faded wooden bowls.

Interesting enough, this time it’s English that has a more accurate food term. Terms in other languages — “Gemischte Salate” in German, “Ensalada Mixta” or “Salad Mixto” in Spanish, describe the salad as “mixed”, which is exactly what it is not.