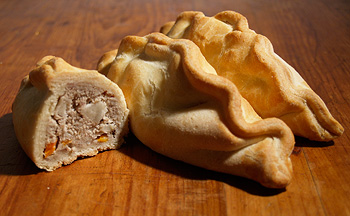 Contents hide
Cornish Pasties are hand-sized pouches of pastry with a savoury filling inside, with the default filling being a beef mixture.

In the summer of 2008, the Cornish Pasty Association in Cornwall applied to the EU for PGI status for their product. In February 2011, the product got its PGI status.

To be sold under the name of Cornish Pasty, the Pasty must be made in the English county of Cornwall. Note that the Pasties only have to be *made* there, as in assembled — they can be shipped unbaked elsewhere for baking. [1] They can be hand-made or machine-made.

The pastry should be crisp and firm, not soggy, and able to be able to be held up by hand. Purists insist that the dough for the pastry should be made of suet or lard. The official EU registered definition says of the pastry: “The pastry can be either shortcrust, rough puff or puff depending on the bakers’ individual recipe. After filling, the pastry can be marked for product identification purposes, e.g. knife hole, scoring or pastry cut-out shape and can be glazed with milk, egg or both which will provide its golden colour. The pastry case is savoury and robust enough to retain shape throughout the cooking, cooling and handling process and serves to avoid splitting or cracking.” [2]

Inside the Cornish Pasty, there are chunks of meat (often mince now), onions, and potatoes.

No other types of meat, vegetables, e.g. carrot, or any artificial additives are to be used in the filling and all filling ingredients must be uncooked at the time of sealing the product.

Note: Traditionally, in Cornwall ‘swede’ is referred to as ‘turnip’ so the two terms are interchangeable there. Makers are allowed to refer to the vegetable as “turnip”, but they must actually use “swede”. [3]

Modern variations include vegetarian versions made with the obligatory whole-wheat dough, or cheese and bacon or pizza fillings. Peas are becoming a popular addition, too — but if these variations are present, then the item can only be sold as a “pasty”, not a “Cornish Pasty.”

Very similar pasties are made in Devon; the only real difference that traditionally in Devon, the seam is made at the top of the pasty instead of the side.

Cornish Pasties evolved as a very “functional food.” They were meant to be a complete, portable meal for farmers, fishers and later miners, that required no plate or cutlery to eat — and remember that it’s only in the past few hundred years that eating utensils moved out of the luxury range enough that a wife would even consider letting her husband take a spoon to work.

Initials shaped out of pastry were often put on them, so that people would know whose was which.

It’s not certain when the new world food of potatoes was added to the mix.

The upper peninsula part of Michigan state in America was the recipient of many Cornish immigrants starting in the 1840s to work in the mines there. To this day, the area is a hotspot for Cornish Pasties in America.

“The Cornish pasty [is] one of the best examples in the world of what one might call functional food. For the Cornish pasty … is not merely delicious food, it was designed for a certain quite definite purpose; it was designed to be carried to work and eaten in the hand, to be taken down the mine, to sea, to the fields. You will see a Cornishman munching his tasty pasty squatting in the narrow tin-mine workings, sitting on the nets in his leaping fishing boat, leaning against a grassy bank whilst the patient plough-horses wait.” — Philip Harben. Traditional Dishes of Britain. London: The Bodley Head, 1953. pp 9 to 10.

Cornish legend says that the devil wouldn’t cross the Tamar River into Cornwall, as he had heard stories that frightened him about what they actually put inside the pasties.

Known as “oggies” in Cornwall.

Middleton, Kimberley. This is where the great pasty revolt begins. London: The Independent. 27 February 2011.

This web site generates income from affiliated links and ads at no cost to you to fund continued research · Information on this site is Copyright © 2022· Feel free to cite correctly, but copying whole pages for your website is content theft and will be DCMA'd.
Tagged With: British Food, Cornish Food, English Food, Protected Geographic Indication