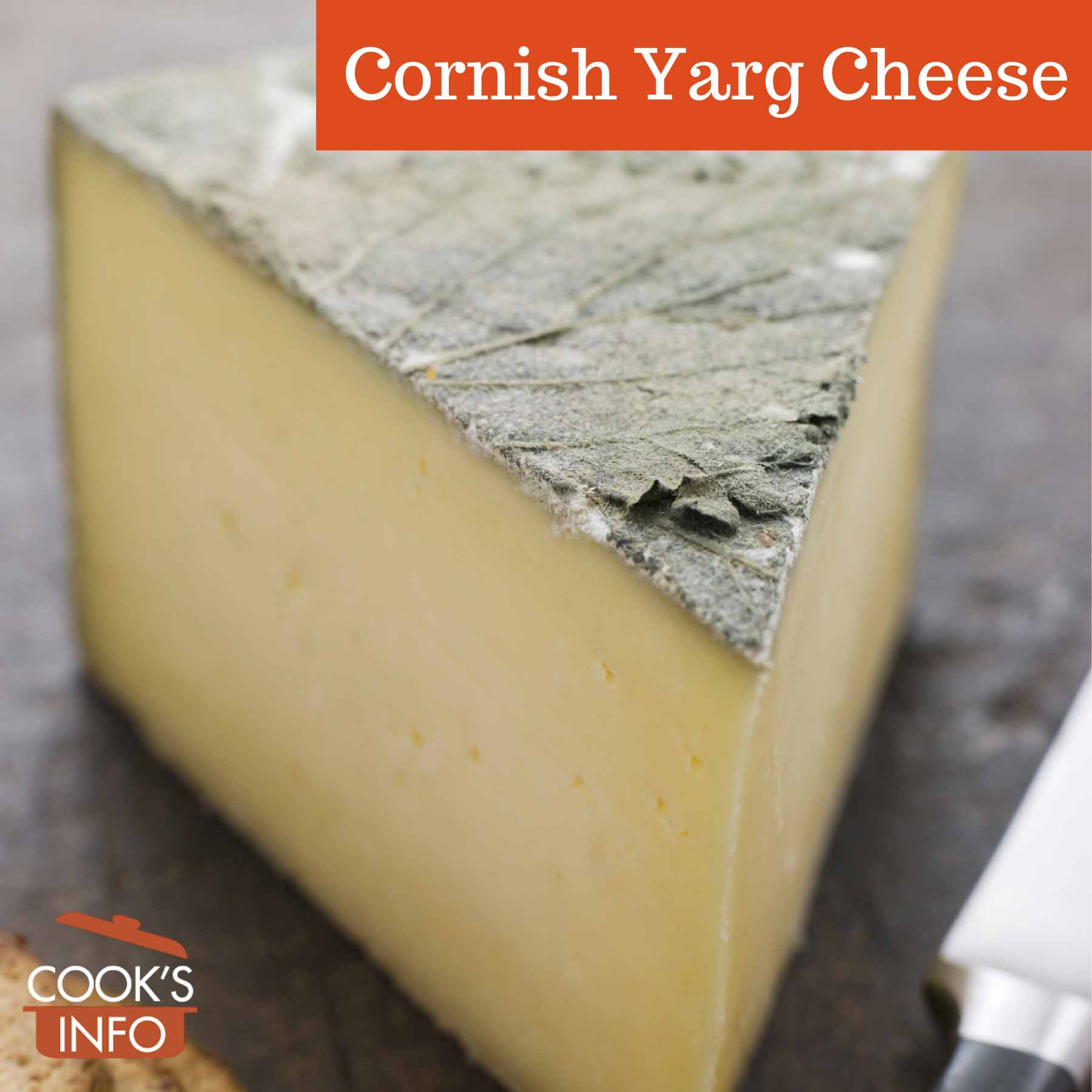 Cornish Yarg Cheese is a semi-firm cheese made from pasteurized Holstein cow’s milk with vegetarian rennet.

The curd is cut, then moulded, pressed, set in brine for 18 hours, then dried for 2 days, then wrapped in stinging nettle leaves and allowed to age about 6 weeks.

The cheeses are sold still wrapped in the leaves, under which the crust of the cheese is green with grey, white or green mould. Inside, the pale yellow cheese is creamy under the crust, firm towards the middle, and slightly crumbly in the middle. The crust is edible. The cheese has a slightly lemony taste.

There are also some flavoured varieties available.

The cheese is made by Michael and Margaret Horrell of Lynher Dairies Cheese Co., Cornwall, England. 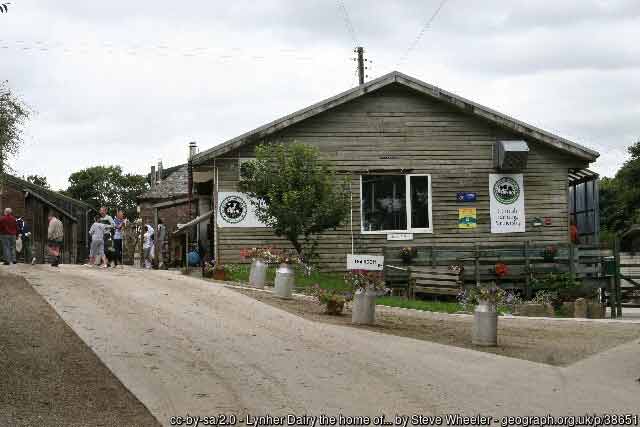 A variety called Cornish Wild Garlic Yarg is wrapped in wild garlic leaves, and made in 4 pound (1.8 kg) wheels. You don’t eat the leaves; you discard them. They are used to add a very mild hint of onion / garlic to the cheese. 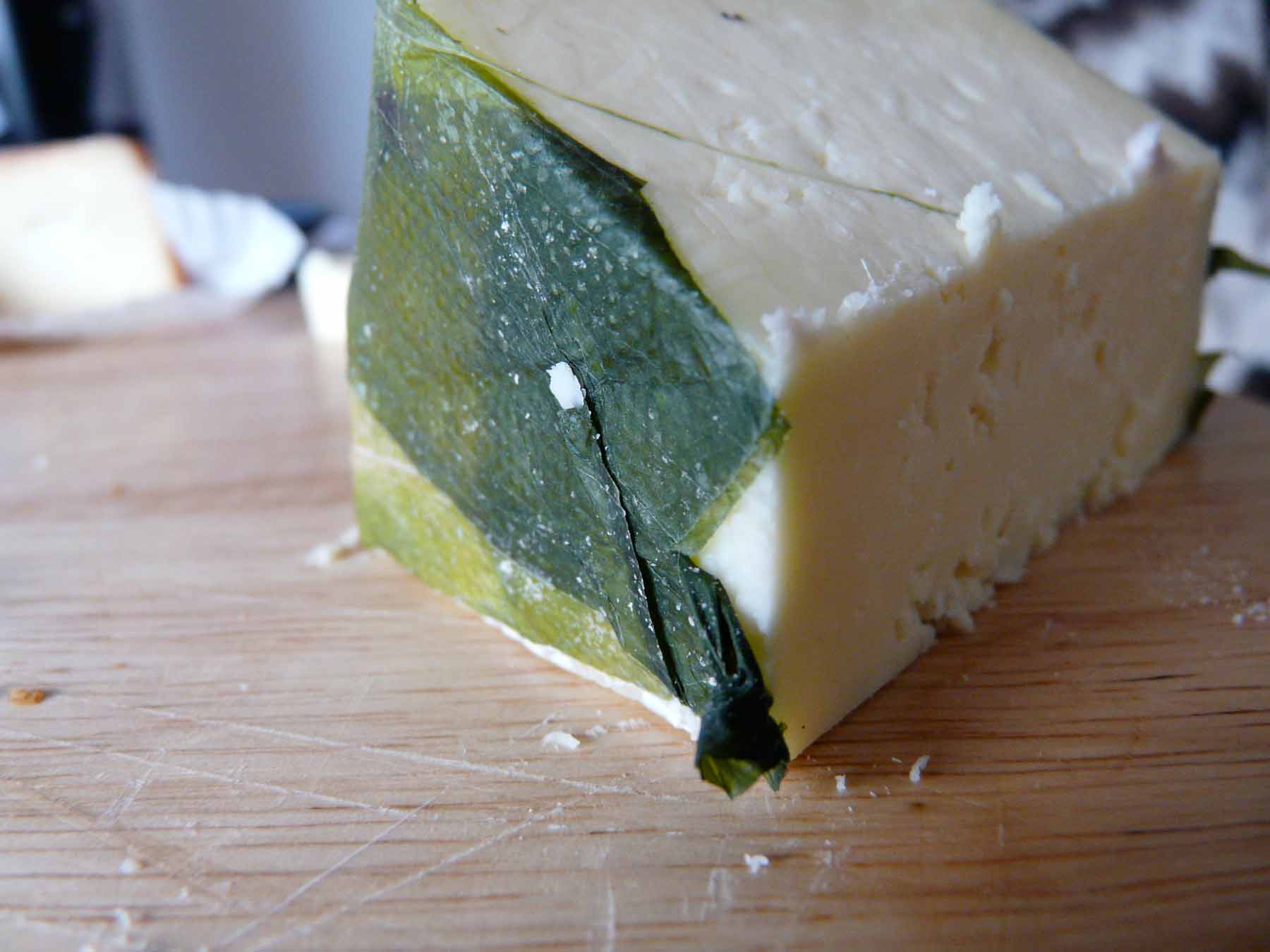 A whole Cornish Yarg Cheese wheel can be stored about 1 month; a cut wedge of cheese can be kept for about 10 days in the refrigerator.

Cornish Yarg Cheese has been made at Netherton Farm in Cornwall, England by Lynher Dairies since 1981.

Allan and Jenny Gray found the recipe for this cheese in an old book in an attic, and gave the recipe to Lynher Dairies. The “Yarg” in the name is their last name, “Gray”, spelt backwards.

“…the Nettle Cheese is so called, because when the Cheese is new-made, Nettles are put upon it; which Nettles are to be renewed once in two days.” — Hannah Woolley. The Gentlewomans Companion. London. 1673.

This web site generates income from affiliated links and ads at no cost to you to fund continued research · Information on this site is Copyright © 2022· Feel free to cite correctly, but copying whole pages for your website is content theft and will be DCMA'd.
Tagged With: British Cheeses, Cornish Food, English Food