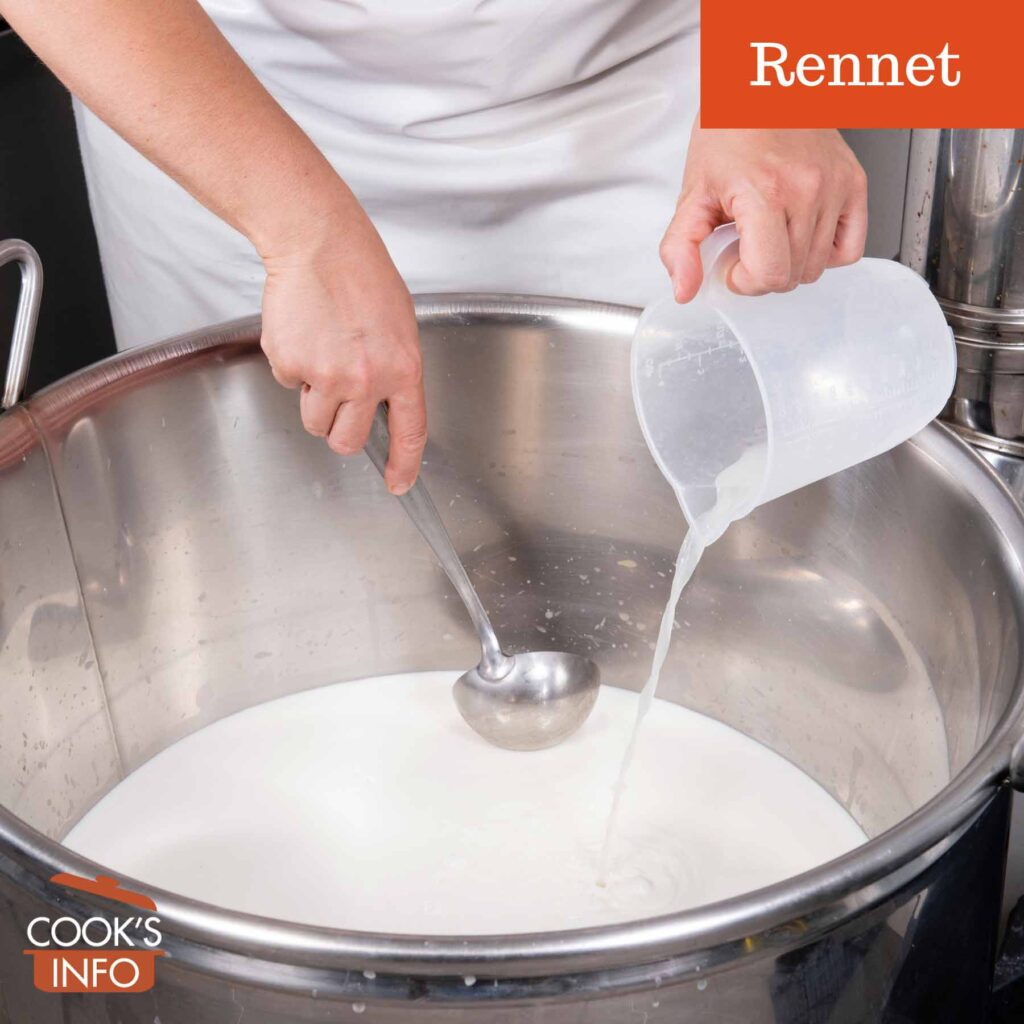 Rennet is a substance used to get milk to curdle in cheese making.

You can buy rennet in tablet or liquid form for home cheesemaking or use in making the curd dessert called “junket“.

Rennet contains an active enzyme called “rennin” which acts on the casein protein in milk. Casein protein is found in minute globules known as “micelles”, which are bunches of casein protein held together in a bunch by calcium. The micelle clumps are negatively charged, and so repel each other, and stay separated in milk. Rennet nullifies the negative charges and lets the micelles come together and form curds. The micelles aren’t broken up, and retain the calcium in them, so they form strong, elastic bonds (and curds) which can be formed and aged.

Cheeses that are curdled using acid instead of rennet

Not all cheeses require rennet.

Fresh, loose-pack cheeses that aren’t aged such as Cottage Cheese, Cream Cheese and Ricotta don’t use it (though Sweet Curd Cottage Cheese does.) An acid such as vinegar or lemon juice is used instead to produce curds through a slightly different process which breaks up the micelles, releasing the casein proteins and the calcium. It too nullifies the negative charge, enabling the casein protein to still come together to form curds. But they are doing this as individual proteins, not as micelles, so a great deal of the calcium ends up in the whey instead of the curds. Consequently, the curds are lower in calcium, and thus weaker. Another side-effect of acid curdling is that it naturally creates more acidic conditions than if rennet had been used, so it provides a less hospitable environment for flavour-producing enzymes to do their work. Consequently, the resultant cheeses don’t have the pronounced flavours of rennet-based cheeses.

How rennet is made

Traditionally, rennet came from the stomachs of calves, usually newly-born male ones that aren’t wanted and so are slaughtered at birth. Specifically, it comes from their fourth stomach. The lining of that stomach has an enzyme called “rennin” which adult cows don’t have. The enzyme helps calves digest milk, which of course they drink in great quantities, getting it straight from the source.

In the past, the stomach lining would be washed and dried, and then a small piece put into the batch of cheese being made. More recently, a liquid extract was made by soaking the small pieces in a brine for 4 to 5 days at 30 C (86 F).

Now rennet is being more industrially through two different methods: 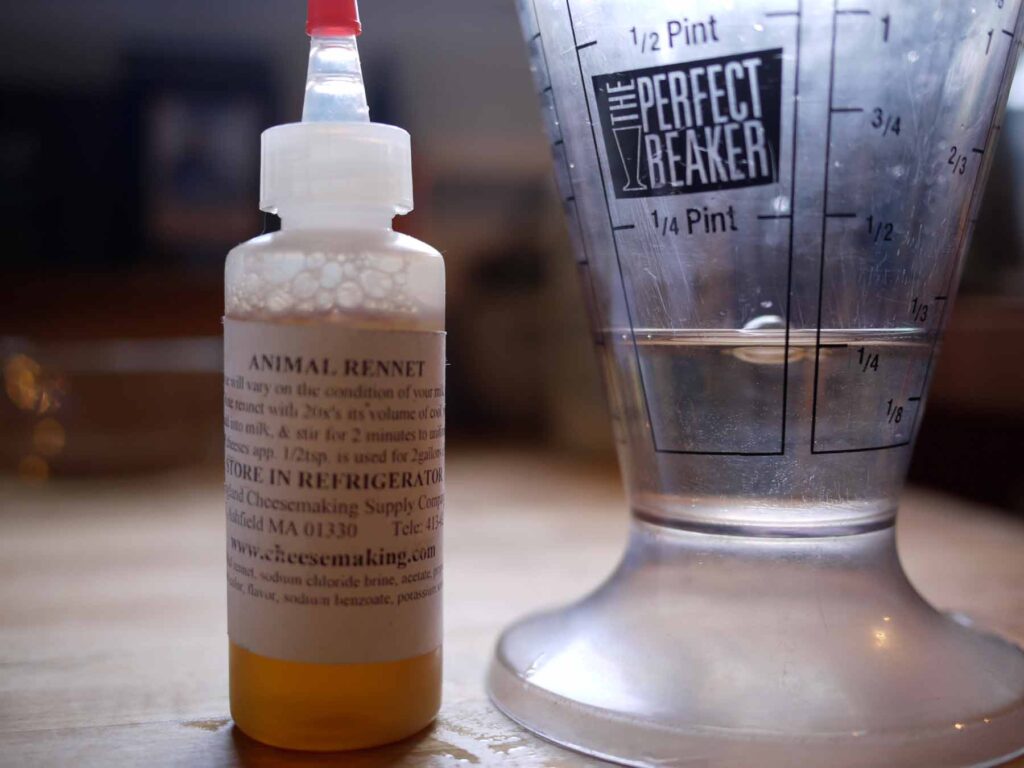 Vegetarian rennet alternatives made from vegetable-based enzymes are also available. In the past, vegetarian sources of a milk curdler came from plants such as thistles, nettles, fig leaves, safflower, the juice from the branches of fig trees, etc.

Some cheesemakers feel that using vegetarian rennet alternatives can give cheese a bitter taste:

“All our cheeses are made with traditional rennet, as it ensures the best quality cheese. Vegetarian rennet can give the cheeses a bitter flavour.” [1]Cheese. Killeen Farmhouse Cheese. February 2017. Accessed May 2022 at https://killeenfarmhousecheese.wordpress.com/cheese/

The ancient Greeks are credited with discovering the use of rennet as a cheese-making tool.

Rennet comes from the German word “rennen“, meaning to run together.

Some marketers of rennin are now preferring the word “chymosin” to move away entirely from the old animal-based connection the word “rennet” has.