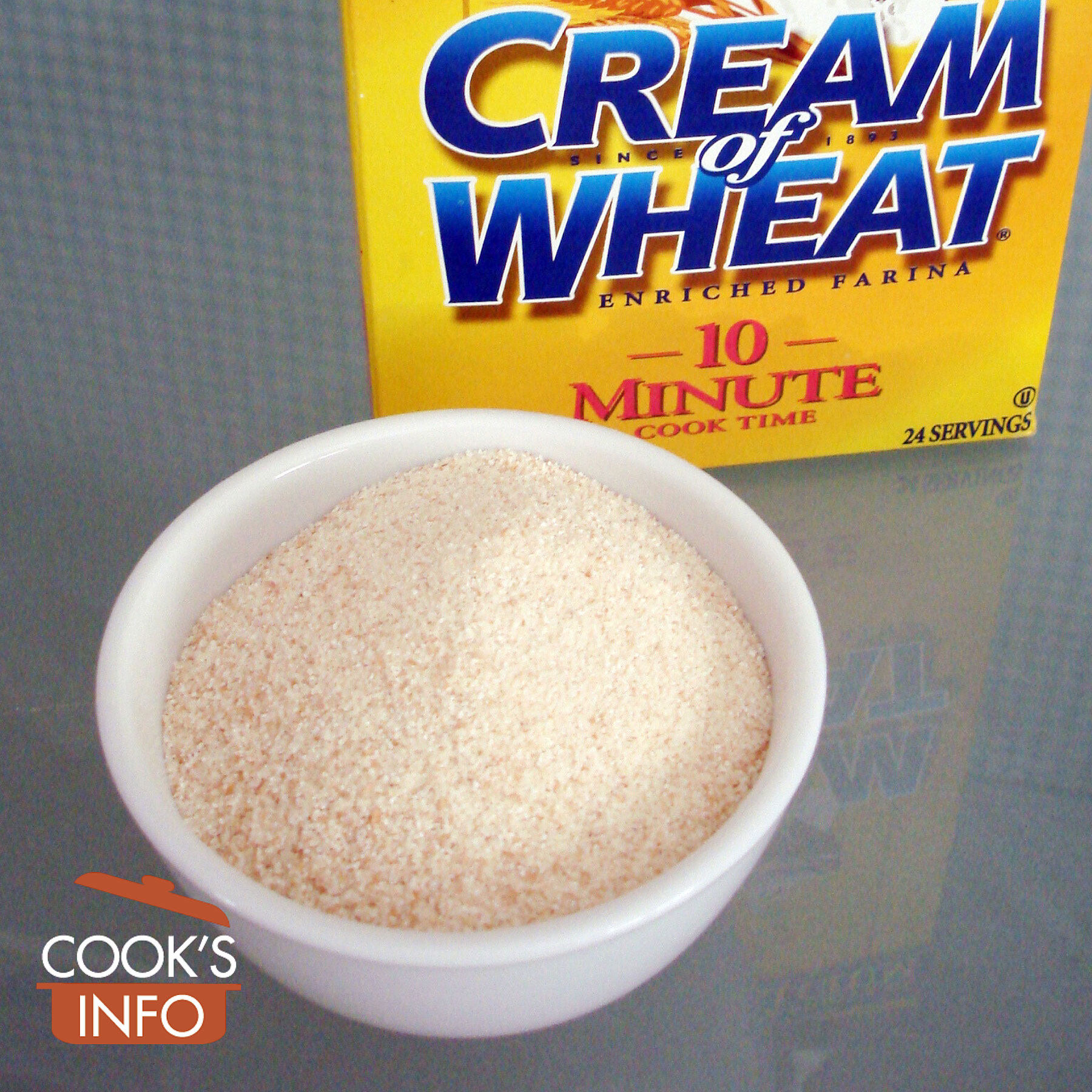 Cream of wheat is both a brand name of a breakfast cereal, and the general name for a certain milled product from wheat grains.

What is Cream of Wheat cereal?

Cream of Wheat® is the brand name of a farina-based cereal. It is not pure farina, but it is mostly farina.

The United States Department of Agriculture (USDA) refers to it as an “instant farina wheat cereal”, made from wheat whose bran and germ has been substantially removed. The branded cereal may contain added sodium, thickeners, emulsifiers, preservatives and flavours.

Note that it is not a whole-grain cereal — “wheat whose bran and germ” have been removed.

The closest thing in the UK is actually pure farina.

The cereal is mixed with water and milk, then cooked up to eat. It will have a texture finer than grits.

There are different variations of the Cream of Wheat product: some quicker cooking, some flavoured, some enriched with wheat germ.

Fans will cook up extra on purpose, packing the extra in loaf-shaped dishes and letting it set in the fridge overnight, then frying slices up the next morning for breakfast.

It also has its detractors; some call it “wall-paper paste.”

The liquid used, usually water, should be boiling.

When making it in a pot on top the stove, pour Cream of Wheat cereal into the boiling water in a steady, slow stream, stirring all the while. Keep stirring until thickened enough to serve, which will take about 2 minutes.

In a microwave, mix all ingredients first. Zap for 1 minute, stir. Zap for up to another 2 minutes, stirring every half minute.

You can use Cream of Wheat in making many other things, such as dumplings, pancakes, etc. 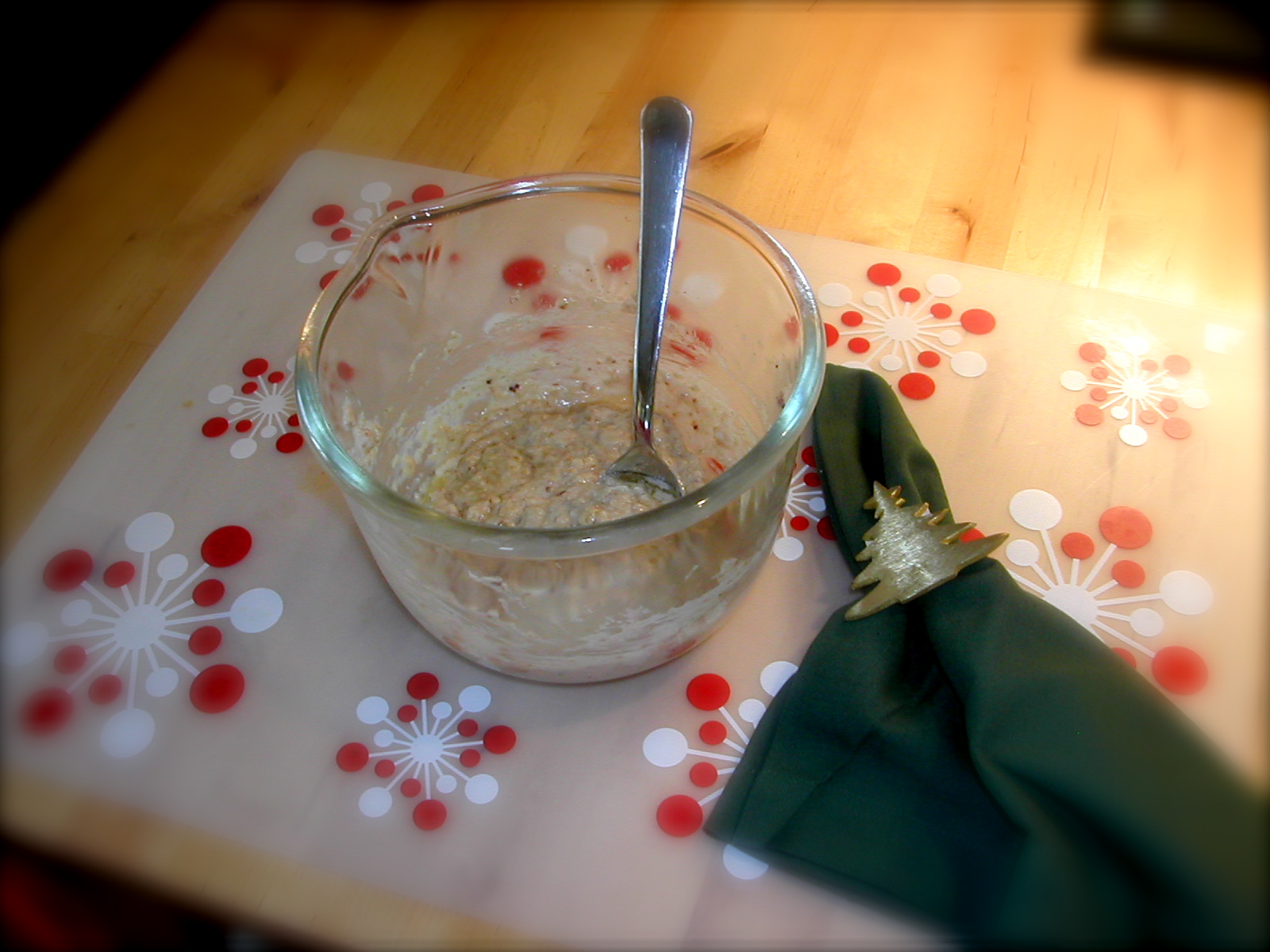 The date given on the official Cream of Wheat® web site for first production of the product is 1893. [1]”Families across America have started their day with Cream of Wheat since 1893.” Accessed June 2020 at https://www.creamofwheat.com/about

The story behind that date starts with Emery Cordenio Mapes Jr (born 24 September 1853 in Aurora, Illinois), who moved in 1882 to the territory of what would later become North Dakota, and set up a newspaper there in Lakota. [2]Eriksmoen, Curt. North Dakota farmer helps launch Cream of Wheat. Bismarck, North Dakota: Bismarck Tribune. 18 September 2016. In 1889, he decided to pursue an interest he had developed in milling. There had been a fire at Diamond Flour Mill at Lake Crystal, near Mankato, Minnesota, for which the owners were not insured, but most of the machinery was apparently “spared.” Along with a man named George Bull, he bought the machinery, and brought it to Grand Forks, North Dakota. There, they restarted the Diamond Flour Mill using the same name and equipment, hiring an experienced miller named Thomas S. Amidon to run things, as neither Mapes nor Bull knew the operational side of the milling business. Amidon arrived at the mill and gave the two partners bad news: the machinery had not in fact been spared from the fire; it had been warped by it, and was basically useless. The two brought in a third partner, George Clifford (a local attorney and banker) to help them raise enough capital to buy new machinery, and the mill went into operation.

Hard times hit the mill a few years later during the economic recession of 1893, but Amidon came up with the idea for a cooked cereal from the whitest part of the wheat, the “farina”. The partners came up with packaging for it, and it was decided that the product would be named “Cream” of Wheat owing to the white of the wheat being used. The demand for the product was such that it needed to be made in a place with better access to distribution networks, and production was moved to Minneapolis, Minnesota in 1897.

In 1926, the Cream of Wheat Company again in court, this time fighting against a reprimand by the U.S. Federal Trade Commission (FTC) for using what the FTC perceived to be an overly-strong hand in enforcing its minimum retail pricing. The judgement gives some information about the company at the time, and the product’s success in the market:

“Cream of Wheat, as sold by respondent, has acquired with the public a wide and favorable reputation, and the consumption has steadily increased in this country and foreign countries. It is used, after cooking, by the individual consumer as breakfast food, and in other ways. Respondent sells, it is roughly estimated, about 40 percent of the package cereal foods prepared from purified wheat middlings and sold in the United States by concerns who advertise nationally. Such firms which advertise nationally sell the great bulk of package cereal foods prepared from purified wheat middlings. Soon after its organization in 1897, respondent adopted and has since maintained a policy of fixing and enforcing minimum resale prices at which Cream of Wheat should be sold by its vendees….” [4]Cream of Wheat Co. v. Federal Trade Commission. Circuit Court of Appeals, Eight Circuit. July 26, 1926. No. 284. 14 F. (2d) 40. In: Federal Antitrust Decisions: Adjudicated Cases and Opinions of Attorneys General Arising Under, Or Involving, the Federal Antitrust Laws and Related Acts … 1890-1912 [i. E. 1911]–, Volume 11. U.S. Government Printing Office, 1934.

Cream of Wheat as a generic term

What can be puzzling and confusing is that “cream of wheat” (“crème de blé  in French) can also be used as a generic term for a product of wheat grain:

“The wheat flour milling process yields wheat flour, used for human consumption and by-products of wheat grain which are bran, shorts, middlings and cream of wheat. The wheat flour and cream of wheat were used for human consumption… most of the bran, middlings and shorts were used as animal food.” [6]M. Urquhart. Gross National Product, Canada, 1870-1926: The Derivation of the Estimates. Montreal-Kingston: McGill-Queen’s Unviversity Press. 1993. Page 193.

Health Canada says, “Refined grains are whole grains that have had the germ and the bran removed (examples include white rice, white flour, grits and cream of wheat).” [7]Health Canada. Whole Grains – Get The Facts. 5 September 2019. Accessed June 2020 at https://www.canada.ca/en/health-canada/services/canada-food-guide/resources/healthy-eating-recommendations/eat-a-variety/whole-grain/get-facts.html

Here is a package of a refined grain product sold as cream of wheat: 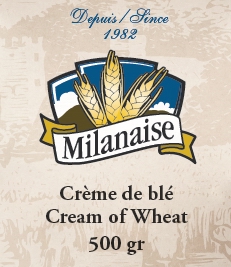 The term “cream of wheat” also certainly seems to have been broadly in use referring to a type of flour at the time of the advent of the “Cream of Wheat” cereal.

Here is a type of flour named cream of wheat being sold at a store in 1886. 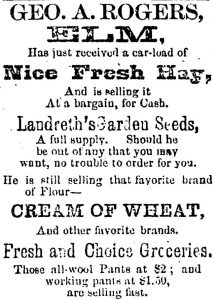 In 1890, Cream of Wheat flour is promoted in Indiana.

In 1891, consumers in Vermont are also reminded that Cream of Wheat “still leads” for flours. 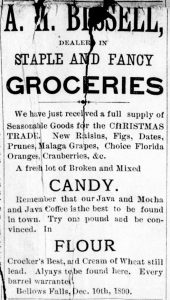 Until 2020, growing criticism from some quarters was directed at the box. It featured a picture of a black man cooking Cream of Wheat. Some felt the image was racist. The image had been on the box since the very first box sold (if the 1893 product introduction date is correct.) The name of the cook depicted was, apparently, Rastus. During its ownership, Kraft insisted that they maintained the image because it was  respectful.  In 2020, the owner at the time, B&G Foods Inc., announced that they would change the image. 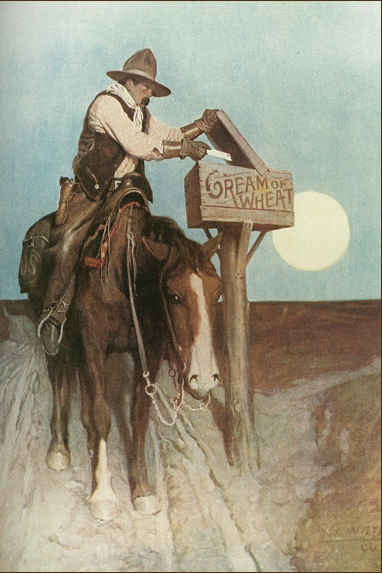 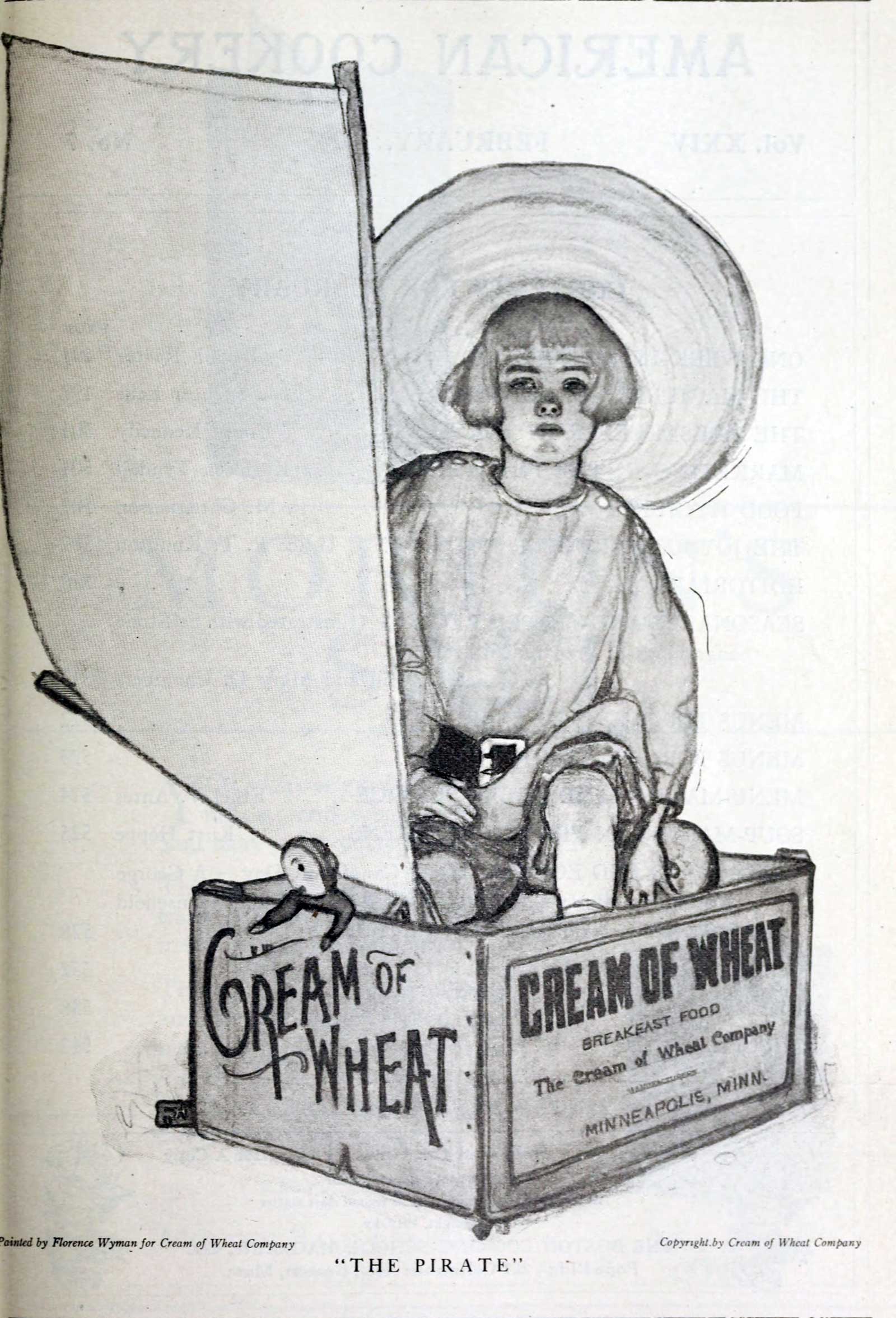