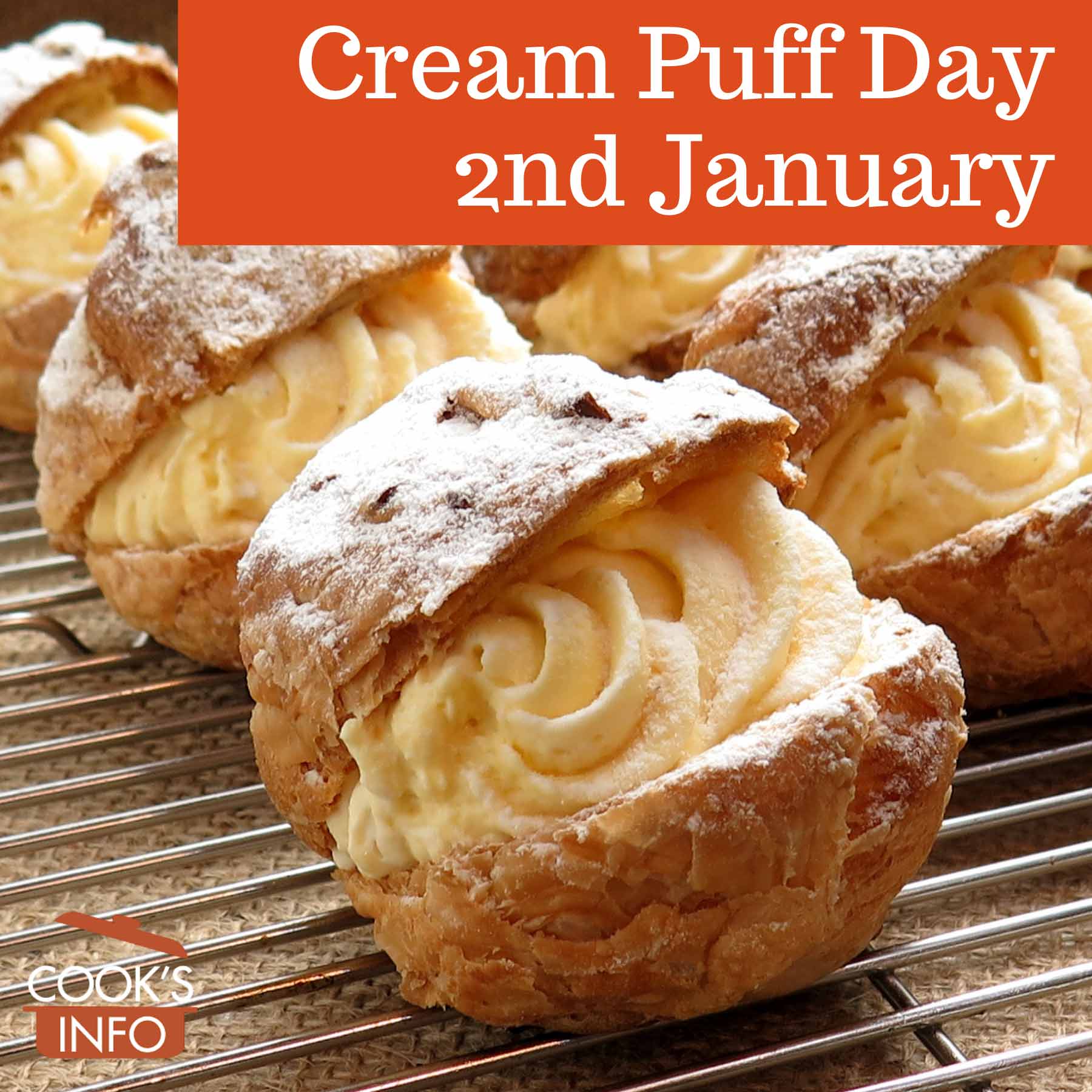 Cream Puff Day is the 2nd of January.

Given that at this time of year we’ve just finished nearly a month of holiday food bingeing, it would probably be more appropriate if it were celery stick or carrot stick day.

Still, even though cream puffs are rich, and pack a caloric punch, they do seem light at least, if only in name.

Cream puffs are balls of light choux pastry. If you are very lucky you might come across a special shape, such as a star, a fruit, a swan or another animal.

Inside, they are filled with some sort of cream or custard mixture. The filings can be flavoured vanilla or chocolate, or something more exotic, such as lemon, mocha or a fruit flavour.

On the outside they can be left plain, dusted with icing sugar, or drizzled with sweetened chocolate, caramel, etc.

To celebrate Cream Puff Day, you could buy some from a local bakery to support them, or failing that, from a grocery store. You could even try making them if you don’t have to work today. If all else fails, you can even buy them frozen.

You could share some with friends, family or neighbours, or take some into work today for the starving hordes there.

In Iceland, Cream Puff Day is known as “Bolludagur”, but it is celebrated on a Monday seven weeks before Easter. [1]Cream Puff Day in Iceland. 16 February 2015. Accessed February 2021 at https://www.icelandreview.com/news/cream-puff-day-iceland/

At the Wisconsin state fair, the Wisconsin Baker’s Association sells around half a million cream puffs each year during the two weeks of the state fair. [2]Fredrich, Lori. Did you know? A few facts about the State Fair cream puffs. Milwaukee, Wisconsin: On Milkwaukee. 2 January 2019. Accessed February 2021 at https://onmilwaukee.com/articles/creampufffacts15

The earliest print reference that CooksInfo is aware of for a Cream Puff Day in January dates to 2005, when a mention of it appeared in several newspapers that appear to be affiliates in various states, Iowa being one:

This web site generates income from affiliated links and ads at no cost to you to fund continued research · Information on this site is Copyright © 2022· Feel free to cite correctly, but copying whole pages for your website is content theft and will be DCMA'd.
Tagged With: Pastry