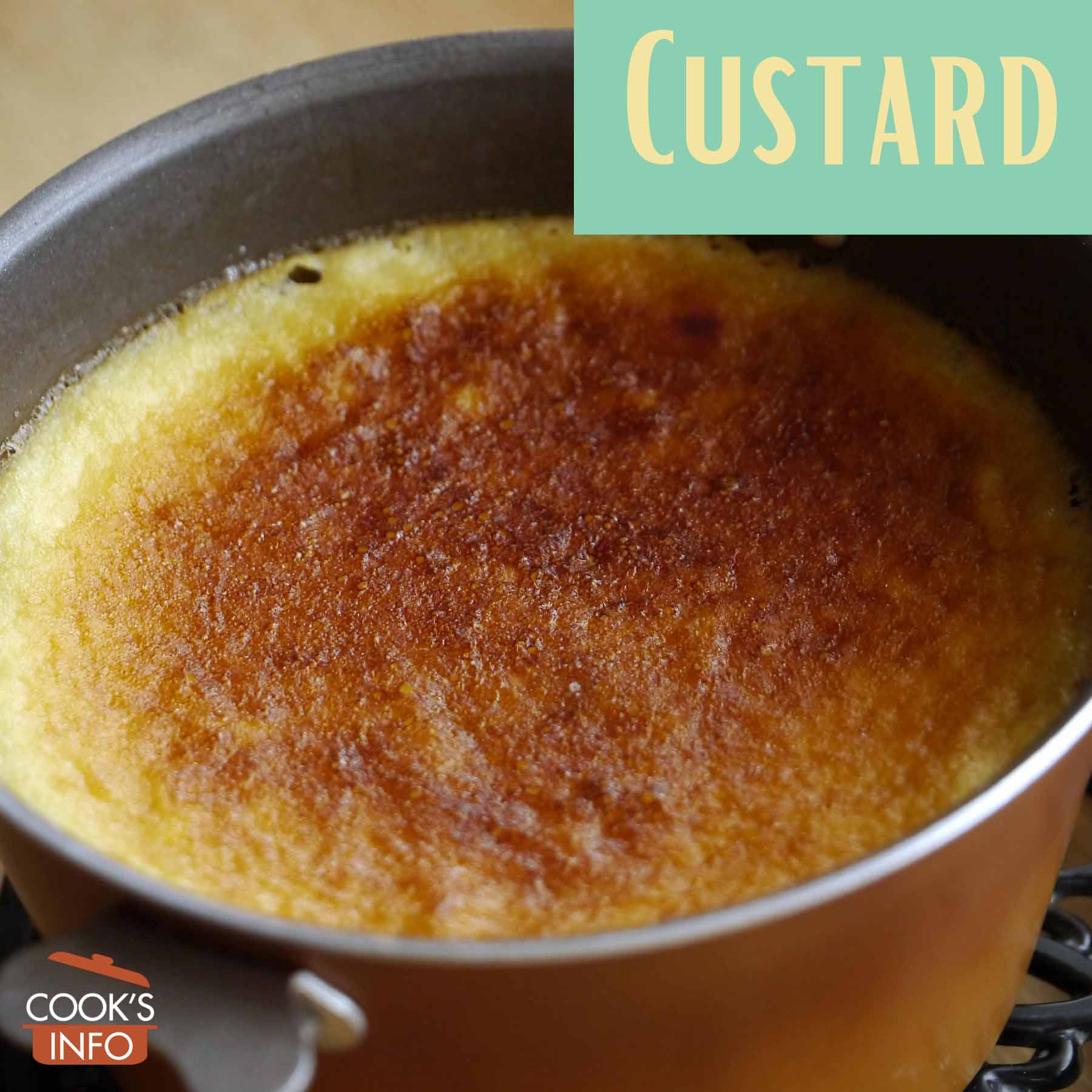 Custard is like what North Americans call a pudding, made from egg and milk. The coagulation of egg protein thickens the milk during cooking.

Custard is generally thought of as a dessert item, and sweet. Low- and no-sugar versions can also be made using alternative sweeteners. In fact, there are also recipes for savoury custards such as fish custard and turnip custard. The most famous savoury custard is, perhaps, quiche. 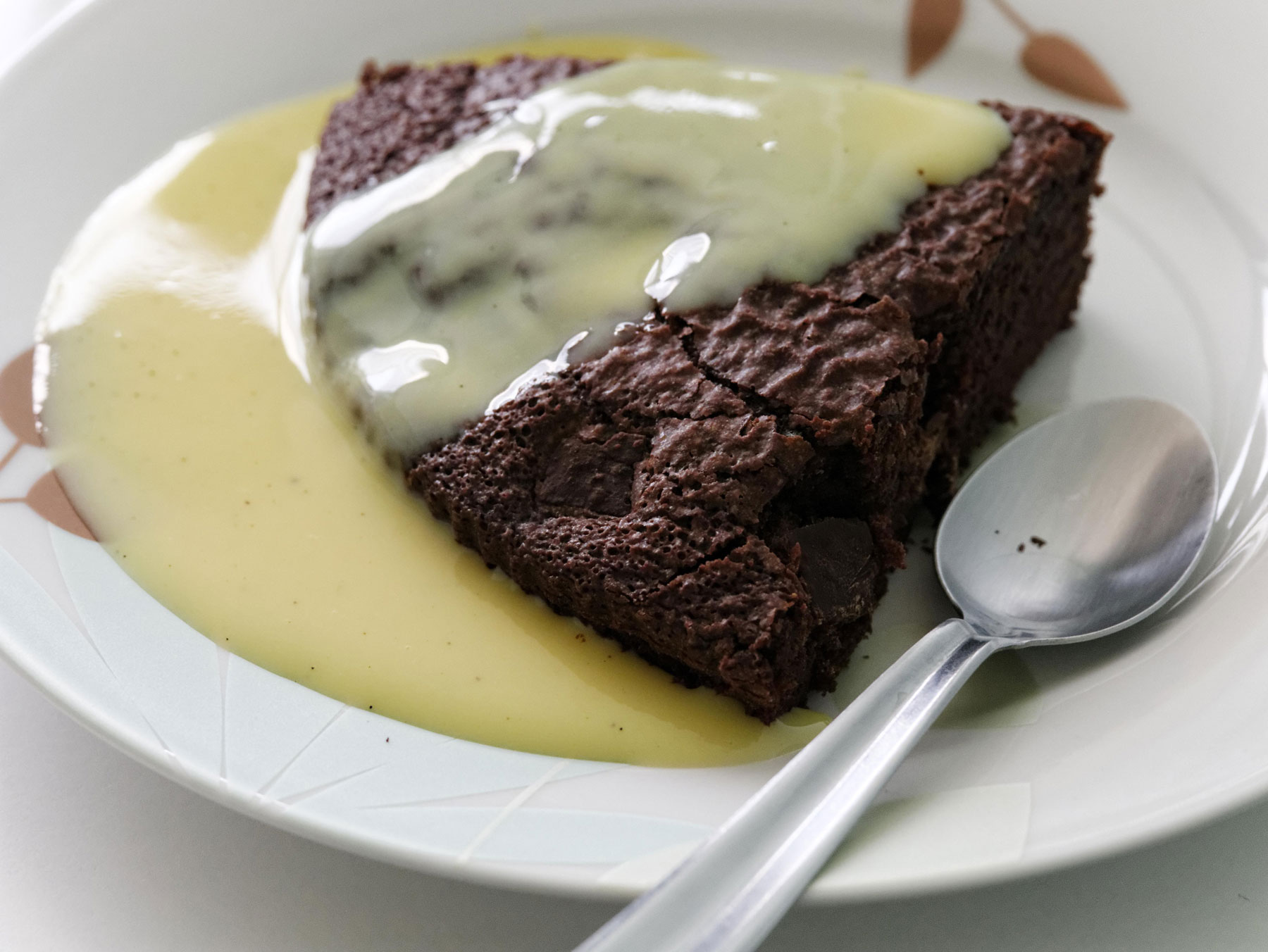 Custard sauce is a yellow, free-flowing, pourable custard often poured hot or cold over steamed puddings, fruit or cake. It is made by stirring the custard mixture in a pot on top of the stove, usually over a double-boiler to keep an even, low heat. (Or, just as frequently these days, made in a microwave).

It is brought to the table in a custard jug for pouring out of.

Custard sauce is done when the sauce can coat a spoon. Never allow it to boil. It will thicken a bit more when refrigerated.

Most households in the UK now make it from custard powder, or truth be told, buy it ready-made in tubs in the dairy chiller at the supermarkets. 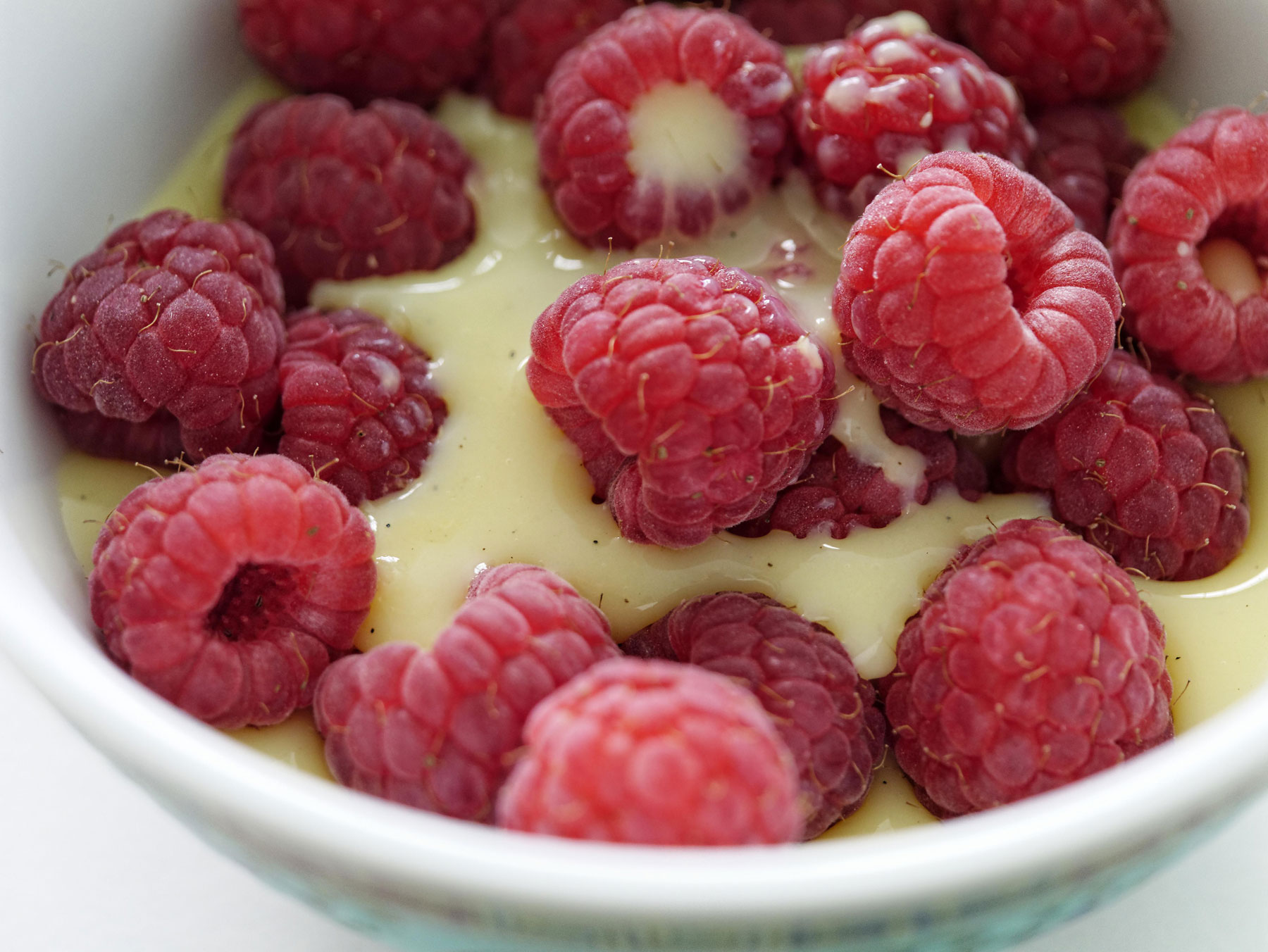 Custard sauce can also be used in making trifle, egg nog, or frozen custard. If you whip it during cooking, you get what the Italians call “zabaglione“. 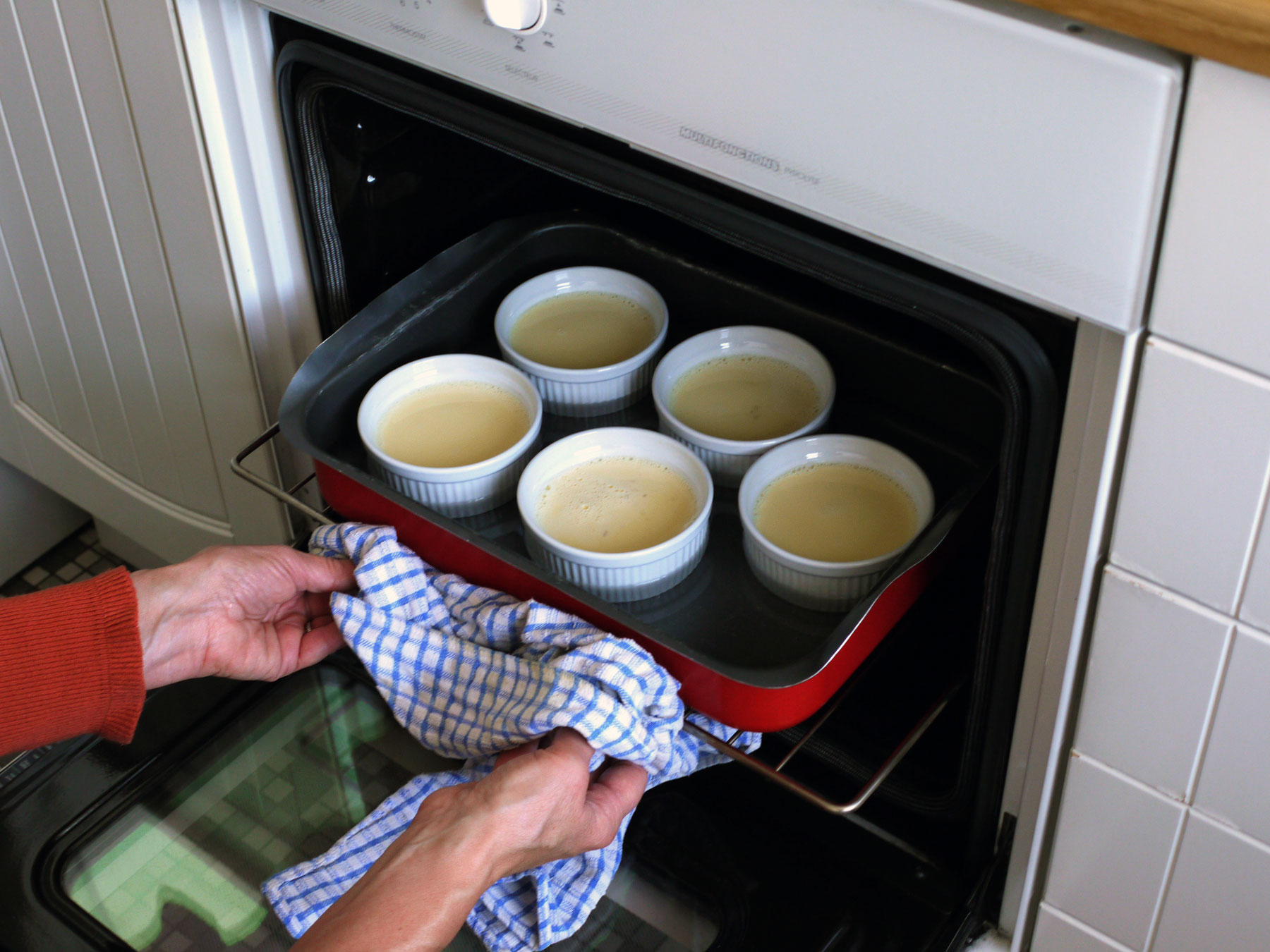 Baked custards are custards baked in an ovenproof dish in an oven, often in a water bath. They come out quite firm; they can hold their shape when spooned out or turned out.

Baked custards are done when they wobble, or when a knife poked near the centre comes out clean with no milk adhering to it.

They will actually cook a little bit more after you remove them from the oven.

Baked custards can become Crème Brulée or a flan. Pumpkin Pie is a flavoured baked custard.

The ratio for baked custard is usually per cup of milk (8 oz/ 250ml), 1 egg plus two tablespoons of sugar. You can boost the ratio to 4 eggs and 4 tablespoon of sugar, but the more sugar, the more time that is needed to thicken, and the more egg, the firmer the custard will be. Instead of an egg you can use two egg yolks or two egg whites (though the colour and flavour will be different with the egg whites.)

When making a soft custard on the stove top, you have to stir constantly. From 12 to 20 minutes, though, is when all the action will happen. By the end of 20 minutes, it should be ready. If you have a cooking thermometer, the temperature at this point will be 71 C (160 F). Mind, though: if it reaches 82 C (180 F), it will curdle.

To stop custard sauce from developing a skin on top when allowed to sit and cool, cover the actual surface (not just the bowl or jug) with plastic wrap, waxed paper or grease-proof paper. Some people say that instead you can whisk every few minutes as it cools to prevent a skim from forming; others counter that that interferes with the proper setting of the custard’s body.

Whether custard is baked in the oven or stirred on top the stove in a pot, the cooking must be slow so that the egg won’t curdle. The curdling is caused by the protein in the egg and milk coagulating too much so that it separates from the liquid, so that it looks like curds and whey. Sometimes, if just a small amount of curdling has started in a custard sauce, you can save it by getting the custard off the heat and whisking it as though your life depended on it.

Custard should always be lump free.

The Romans made custard. In De Re Coquinaria, Marcus Gavius Apicius lists a recipe for custard. It’s completely recognizable as a custard we would make, except for the absence of vanilla, which the Romans didn’t have. (Apicius, though, does toss in a dash of ground pepper). Roman custards were usually treated as a sweet.

In the Middle Ages, custard was used as a filling for flans or pies. By the 1500s, instead of being used in pies, custards were being made on their own in dishes, particularly fancy individual dishes that the burgeoning merchant class could afford.

Americans took a shine to Alfred Bird’s custard powder as soon as it was available in the United States.

“General Foods’ long-established Birds custard powder and instant custard account for more than 50 per cent of sales in these markets. Retailers’ own-labels hold about one-third of the custard powder market with CPC’s Brown and Poloson brand also holding an interest. UK manufacturers include Pearce Duff (Dalgety) and Rowntree Mackintosh (Nestlé), while Beecham’s Ambrosia entirely dominates the canned, ready-to-serve custard market.” — Mark, John, and Robert Strange. Food Industries: Reviews of United Kingdom Statistical Sources. Volume XXVIII. London: Chapman & Hall. 1993. Page 508, 11.2.4. [Ed: The researchers note that the “…review is believed to represent the position, broadly speaking, as it was obtained in mid-1989, but a few minor revisions have been made to update the main text during the proof-reading stage in mid-1991.”]

In spring 2021, primary school pupils in Aberdeenshire, Scotland, rebelled when custard was removed from the school canteen menus.

The Council further explained that healthier alternatives such as “brownies, muffins, gingerbread, and cookies” would be provided instead.

The petition was ultimately a success, with officials bowing to the children and agreeing in August 2021 to let them have their custard again. “Children will now return to schools from the autumn break with custard on the menu.” [3]BBC Scotland. Custard to be reinstated in Aberdeenshire after school petition. 26 August 2021. Accessed August 2021 at https://www.bbc.com/news/uk-scotland-north-east-orkney-shetland-58341247

Though custard doesn’t have its own word in French (the word for cream, “crème”, is used) it is used a great deal in French dessert making, typically under the incarnation of “pastry cream“. French speakers in Quebec developed a word for it, “cossetarde” for greater precision.

The English word custard comes from its Medieval use in pies — from the word “croustade”, meaning pastry or something with a crust. The custards were a pie filling, just as pumpkin pie is still a pumpkin-flavoured custard cooked in a pie shell. And though egg and milk custards were made and eaten on their own even in Roman times, the word “croustade” — granted, a bit modified — got applied to that cooked egg and milk mixture, whether in a pie or out of one.