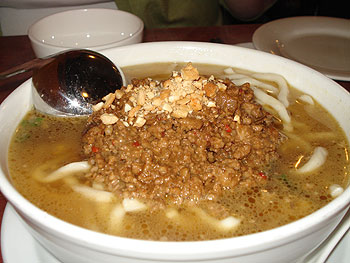 Dan Dan Noodles is a dish from the Sichuan area of China. It is noodles served with a spicy sauce called “mala.”

Mala sauce is made of ground pork, Sichuan pepper, chile oil, preserved vegetables and green onion. In the American-Chinese style of Mala sauce, sesame paste is often added to make it less spicy and sweeter.

The noodle used is “sun mein” noodle, made from wheat.

When Dan Dan Noodle is served to you, it may have noodles in the bowl, with spoonfuls of the sauce on the top. You may have to stir it up in the bowl.

The dish is often garnished with peanuts.

“Dan Dan Mian” in Chinese. This means Peddlar’s Noodles, Street Vendor’s Noodles. “Dan dan” is the pole that peddlars would carry over their shoulders, with goods hanging at either end.

This web site generates income from affiliated links and ads at no cost to you to fund continued research · Information on this site is Copyright © 2022· Feel free to cite correctly, but copying whole pages for your website is content theft and will be DCMA'd.
Tagged With: Sichuan Food