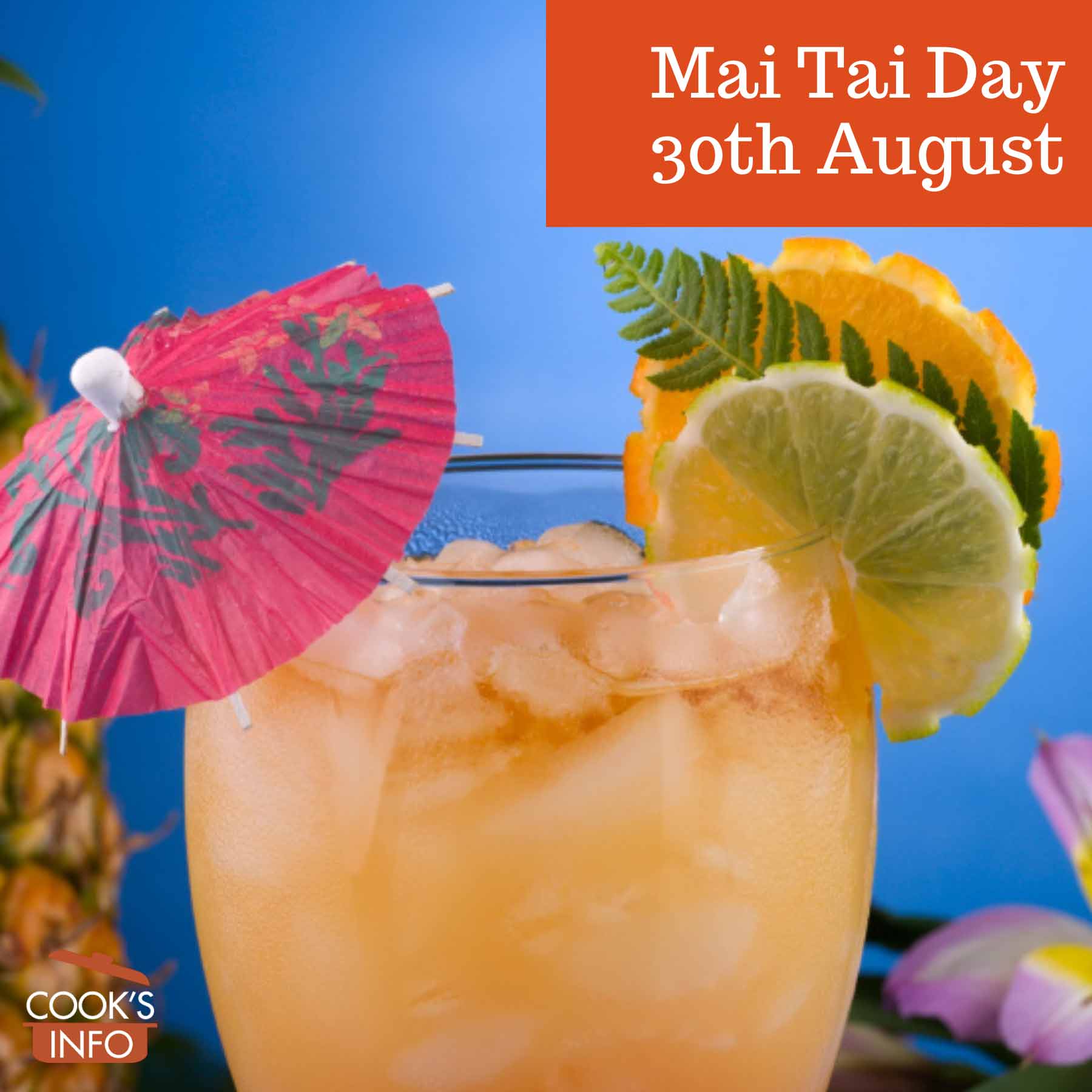 The 30th of August is Mai Tai Day.

A Mai Tai has been called a taste of Paradise In A Glass®.

Offering a liquid glimpse of sun and fun, it’s a holiday poured into an old-fashioned glass over ice, and garnished with a sprig of mint, a citrus peel and a paper parasol.

The drink has come to symbolize 1950s and 1960s Tiki Bar culture, as well as Hawaiian culture (even though the drink was actually invented in California!)

Original recipe from 1944
1 oz. amber Martinique rum
1 oz. dark Jamaican rum
1 oz. fresh lime juice
½ oz. orgeat syrup (or use 1 drop pure almond extract)
½ oz. of Cointreau
floater of Dark Rum (optional)
mint (optional garnish)
lime half after squeezing, or peel (optional garnish)
Instructions
Add all ingredients to a cocktail shaker, except the garnish and dark rum floater.
Shake and strain into a rocks glass filled with crushed ice.
Garnish with fresh mint and a lime.
You may also float some dark rum on top of the cocktail.

It was proclaimed on that day by the city council of the City of Oakland, California, where the Mai Tai was created

The day celebrates the cocktail invented in 1944 by Victor Bergeron (aka Trader Vi). Reputedly, according to some sources, the cocktail was invented exactly on the 30th of August.

If you see the 30th of June date floating around for this day, it’s because someone didn’t take the time to check first to see if the day already existed, and tried to make another date.

Rufus, Anneli, Gear Up for National Mai Tai Day in Oakland, Whose Official Cocktail is … You Guessed It: the Mai Tai. Oakland, California: Oakland Magazine. 25 August 2015. Accessed July 2021 at http://www.oaklandmagazine.com/Gear-Up-for-National-Mai-Tai-Day-in-Oakland-Whose-Official-Cocktail-is–You-Guessed-It-the-Mai-Tai/

This web site generates income from affiliated links and ads at no cost to you to fund continued research · Information on this site is Copyright © 2022· Feel free to cite correctly, but copying whole pages for your website is content theft and will be DCMA'd.
Tagged With: Cocktails