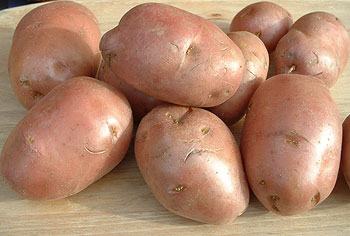 Though Desirée Potatoes are only now starting to be grown in a few parts of North America, mostly by home gardeners, they are immensely popular in the UK, Australia and Europe.

They are all-purpose, oval potatoes with a yellow flesh and a bright-pink skin, and a great potato flavour. They are very popular for use in making potato wedges, roast potatoes and chips because they don’t crumble. They are also good for boiling, and even for mashing. They don’t work quite as well, however, in salads or when steamed.

Gordon Ramsay, the British chef, swears by Desirée Potatoes for making chips from.

Desirée Potatoes are also good for making gnocchi from.

The Desirée was developed from a cross between Urgenta and Depesche potatoes by ZPC seed potato company in Leeuwarden, The Netherlands in 1951. Released in 1962.

This web site generates income from affiliated links and ads at no cost to you to fund continued research · Information on this site is Copyright © 2023· Feel free to cite correctly, but copying whole pages for your website is content theft and will be DCMA'd.
Tagged With: All-Purpose Potatoes, Dutch Potatoes