Devil’s Food Cake is a chocolate cake with a medium-dense but light-texture.

Some say that the reddish chocolate colour originally came from the baking soda reaction with the cocoa powder.

The more acid the environment that cocoa is in, the browner the cake will be; the more alkaline, the more mahogany coloured it will be. Elements in the cocoa are yellow in the presence of acid (giving the brown); red in the presence of alkaline (giving the mahogany.) If you started with Dutched Cocoa (already more alkaline than regular cocoa), then by adding baking soda (another alkaline), you increase its tendency to turn red. Others say that even so, the reaction won’t be sufficient enough to cause a noticeable reddish colour.

If you started with regular cocoa (less alkaline), to get a reddish colour you’d have to add so much baking soda that you might end up with a soapy, chemically taste.

Others say it might have originally come from red vegetable pigment in the cocoa, but that too is only in trace amounts and not enough to account for the colour of the cake.

All this debating aside, the irony is that the first recorded recipes for Devil’s Food Cake didn’t even use cocoa at all — they used baking chocolate instead (see the history section below.)

In any event, modern recipes use baking powder instead of baking soda, and definitely call for red food colouring.

In the 1970s gentle mass hysteria spread in North American kitchens about whether the red dye used in making red food colouring caused cancer or not, and this caused people to avoid making Devil’s Food Cake entirely. Today the red colour is brought back using red food colourings that have been pronounced safe.

Opinions vary as to whether the frosting on the cake should be white or chocolate.

It seems to have first appeared in print in 1902, in Sarah Tyson Rorer’s book, “Mrs. Rorer’s New Cook Book”, though it was actually known somewhat before that. Her recipe called for chocolate (unsweetened baking chocolate, presumably), as opposed to cocoa, rendering moot any thoughts about Dutched cocoa and baking soda interacting. No red food colouring is called for. She assembles it as a layer cake with white frosting.

Put in a double boiler four ounces of chocolate and a half pint of milk; cook until smooth and thick, and stand aside to cool. Beat a half cup of butter to a cream; add gradually one and a half cups of sugar and the yolks of four eggs; beat until light and smooth. Then add the cool chocolate mixture and three cups of pastry flour, with which you have sifted two teaspoonfuls of baking powder. Beat thoroughly for at least five minutes; then stir in the well beaten whites of the eggs. Bake in three or four layers. Put the layers together with soft icing, to which you have added a cup of chopped nuts. The success of this cake depends upon the flour used.” — Sarah Tyson Rorer. “Mrs. Rorer’s New Cook Book”. 1902. Page 619.

The list of ingredients calls for ½ cup (4 oz) of milk, whereas the directions call for ½ US pint (1 cup / 8 oz of milk.) That mistake is actually in the publication.

Immediately following her Devil’s Food recipe is one for Cocoa cake, which does use cocoa. 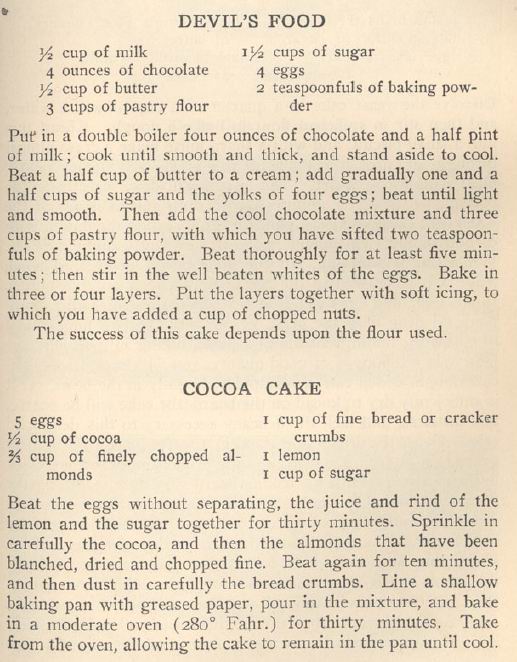 In the Los Angeles Times Cook Book No. 2 (c. 1905), page 44, a Fleta Aikman of Azusa, California gives a Devil’s Food Cake recipe that calls for grated chocolate. While she gives no baking directions for the cake, the final part of the recipe called “Filling for cake” presumes that you know it is a layer cake. On page 47 in the same book, an L.V. Rupe of Los Angeles and a Mrs Hartley of Glendale, California, also have you use chocolate that you need to melt. L.V. Rupe gives you the option of baking it as layers or in a loaf pan, while Mrs Hartley directs you to use a loaf pan. Both have you use a boiled, white frosting to finish it with.

In 1909, a Mrs Nelson Ruggles in the “The Good Housekeeping Woman’s Home Cook Book” (Isabel Gordon Curtis, editor. Chicago: Reilly & Britton, c1909.) has you use solid chocolate as well (“one-fourth cake of chocolate”), which you grate and dissolve in water with baking soda. She specifically directs you to “Use white icing”.

By 1914, we have something that might be cocoa starting to appear in place of solid chocolate, as the recipe has no step which indicates melting the chocolate. But note, there is no baking soda — baking powder is used instead: “Devil’s Cake. Piece of butter size of an egg, yolks of three eggs, one cup brown sugar, four tablespoons chocolate, one-half cup milk. Mix well; then add two teaspoons of Crescent baking powder, with one and one-half cups flour; add the whites of three eggs, and bake in three layers.” — The Council Of Jewish Women. The Neighborhood Cook Book. Portland, Or. Press Of Bushong & Co. 1914, page 229.

Still, by the 1920s, a mention of it in a newspaper merited some explanation: “A cake, now on the market, called Devil’s Food cake comes in the individual size, round and covered with a chocolate icing. Makes a fine accompaniment to the lunch basket.” — “The Lady with the Market Basket” column. Hutchinson News, Hutchison, Kansas. 3 July 1925. Page 5..

It’s uncertain where the name “Devil’s Food Cake” came from.

It is perhaps named, as some speculate, to contrast with Angels’ Food cake. But this theory isn’t given undue consideration, because Devil’s Food cake doesn’t have any relation to Angel’s Food Cake; it’s a completely different cake.

Normally, in English, “devil” attached to the name of a dish means it has something hot in it, such as mustard or cayenne pepper (things that people at the time would have considered hot.) It may be that here, with the cake, the sense is that the cake is so rich and so good that it’s sinful.

Some think the red colour represents the devil part.

One urban myth is that Devil’s Food Cake originated at the Waldorf Astoria Hotel hotel in New York in the 1950s (some say 1920s), thus one of its synonyms “Waldorf Astoria Cake”. A rumour spread that a customer asked for the recipe, got it — along with a bill for $100 for the recipe. Thus one of its other synonyms, $100 Dollar Cake. Some versions of the story said the cost was $200, and so they call it the $200 Dollar cake. This was an early version of the Nieman Marcus cookie urban myth which spread on the Internet in the 1990s.