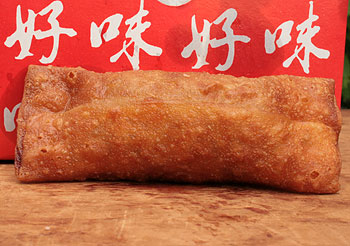 An Eggroll is a small, cooked roll served as a starter in Chinese food. It is made by wrapping a thin piece of dough around a filling, and deep frying it. The dough wrapper turns crunchy.

They are meant to be served piping hot.

The fillings inside can be vegetable, or vegetable and meat. Westernized versions have lots of cabbage in them. Eggrolls are very similar to spring rolls, though spring rolls are smaller and more delicate.

You can make them at home, buy them frozen, order in as part of a Chinese delivery food order, or eat in a restaurant.

It’s somewhat of a mystery how they came to be called “Eggrolls” in English. The Chinese name does not contain the word “egg” at all (see Language Notes below), nor do the Chinese use any eggs in the filling. (Some North American versions will occasionally have some scrambled egg in them.) There is a very small amount of egg in an egg roll wrapper, and that may be the origin of the English name.

The Chinese do make an actual egg roll — the wrapper, though, instead of being a piece of dough, is an actual omelette made of eggs, which is then rolled up with a stuffing in it.

Best reheated in a small oven such as a toaster oven, around 350 F / 180 C for 10 minutes. You can also reheat in a microwave, though some of the crunch will be lost.