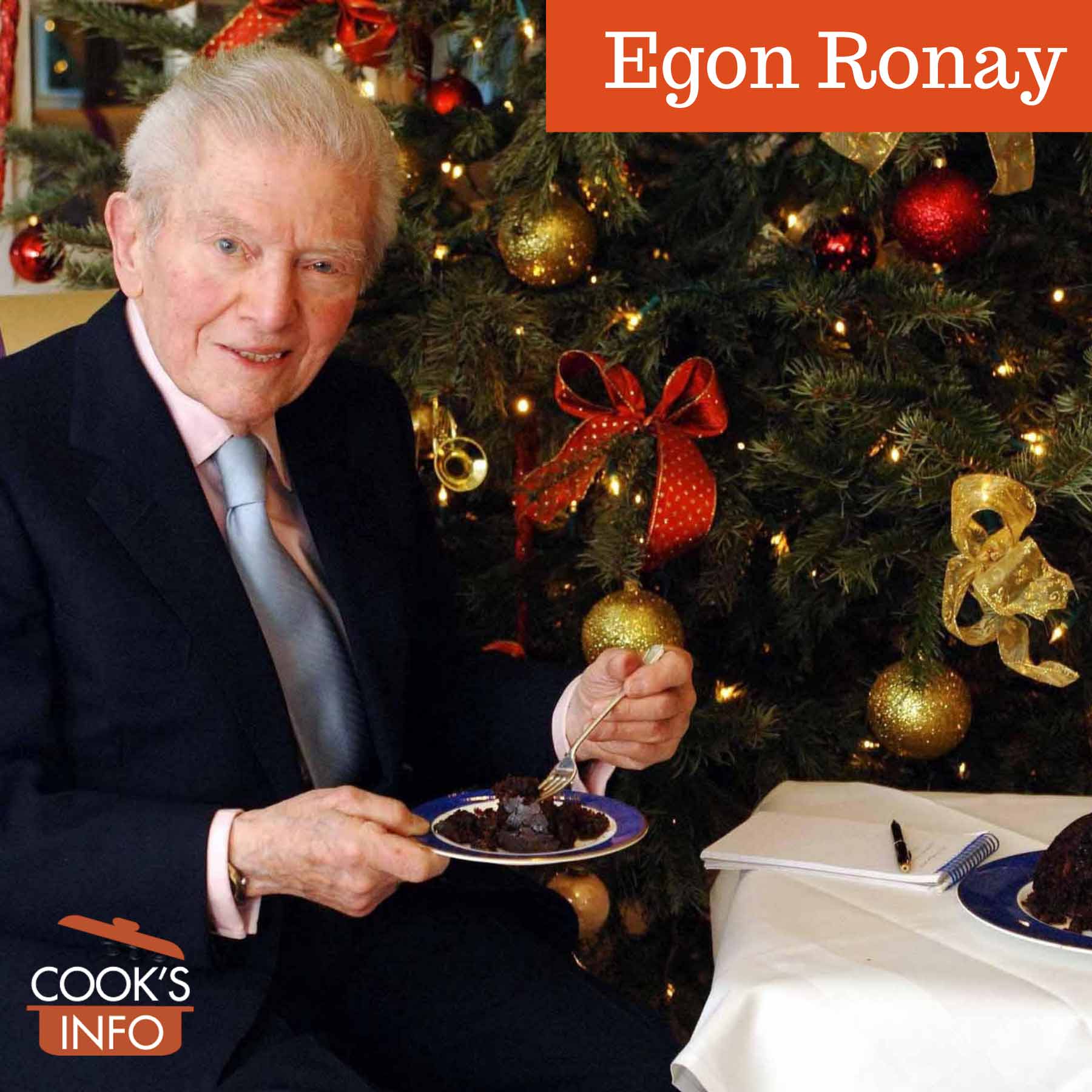 Egon Ronay blind tastes one of several Christmas puddings at the Goring Hotel, London, Thursday 8th December 2005. A supermarket Christmas pudding has beaten a Harrods version in a taste test carried out by Egon Ronay. The Sainsbury’s Cognac-laced version was the best of eight puddings anonymously tested by the food critic. Fiona Hanson/PA / 2005 / Alamy.

Egon Ronay (24 July 1915 – 12 June 2010) was one of the world’s most famous restaurant reviewers, and publisher of a series of restaurant guides that spanned 40 years.

Many of the printed restaurant guides had sponsors, though the sponsors were all unrelated to the hotel and food industry, and Ronay would not accept advertisements from hotels or restaurants. He and his people never accepted free meals or rooms. His inspectors did unannounced visits.

Ronay held that the food revolution in the UK actually got its start in the 1960s, when ordinary people started to have money. Before then, wealthy people thought it was not done to talk about food. Ronay accepted the new word “gastropub”, though he was not particularly keen on it as a word, but he did like what the gastropubs were turning out.

Despite all the fine dining he had done, Ronay professed to prefer above all his wife’s Irish stew, as well as partridge, pheasant and venison.

Egon Ronay was born circa 1916 (he was 89 in 2005.) His grandfather Nicholas owned a 120 room hotel in Pöstyén, Hungary. His father, Miklos, was a successful restaurateur in Budapest, Hungary, having five restaurants. He brought Egon into meetings about the restaurants when Egon was 17.

Egon studied law at University, but the family lost everything during the Second World War. After the Russian siege of Budapest in December 1944, he sold coffee to try to make some money. He was arrested by the Russians and was about to be sent to Siberia, when a Russian soldier remembered buying coffee from him, and freed him.

Egon escaped Hungary and arrived in England on his own as a refugee on 10 October 1946, around 30 years of age. He would not return to Hungary again until around 1983, for a visit.

Ronay got a job at the Princes restaurant in Piccadilly owned by a friend of his father, then worked for a while at the Carousel Club in St James’s.

In 1952, on the strength of a borrowed £4,000, he opened a small tea room called the “Marquee” in the Knightsbridge area of London. Fanny Cradock was writing a column at the time for the Daily Telegraph. She came to review the restaurant with her husband Johnny, they loved it, and she gushed about it. Egon was then persuaded by Cradock’s editor at the Daily Telegraph to start his own column, which he wrote weekly for six years.

Entering the world of restaurant review

In 1957, he published his first restaurant guide, selling 30,000 copies. He sold four pages of ads in it to the Ford Motor Company. He started the guide because he was infuriated at the low standards of public food in Britain.

In 1967, he married Barbara Greenslade.

In 1979, in his “Lucas” guide, he also rated — and trashed — the food and the service on 14 airlines travelling between the UK and North America.

In 1983, he founded “The British Academy of Gastronomes.” He also in the same year ran a cosponsored promotion with J. Lyons & Company. A competition was held offering five all-expense paid, plus spending money, weekends for two in Europe. Entrants had to be able to say in four languages “Thank you for a wonderful meal” and say what for them was a good meal. They also got a meal at a restaurant in the same city they chose from the “Egon Ronay TWA Guide to Good Restaurants in Europe.” The contest was linked to J. Lyons & Co. “Continental Desserts” product; the packaging also gave consumers a coupon for 50 p off “Just a bite : Egon Ronay’s Lucas guide for gourmets on a family budget” (published 1979.)

In 1985, he was tired of his eating guides empire, and sold all rights to the Automobile Association, including using his name attached to a food guide. Three years later, the Automobile Association had sold the rights on to the Richbell Group. The deal continued to prohibit Ronay from publishing under his own name — the enforced silence frustrated him. In 1992, after the Richbell Group had gone bankrupt, he began legal action to regain the right to his name in print, which was finally awarded back to him by the courts in 1997.

During the 1990s, he worked for the British Airports Authority (BAA) and for J.D. Wetherspoon, a big pub chain in the UK.

Ronay disappeared from the scene around 1996.

In the 2000s, he lived in Yattendon in the Berkshires (where he died) with his second wife, Barbara. His daughter, Edina, a former girlfriend of the actor Michael Caine, became a fashion designer. He had two other children, Esther, and Gerard. 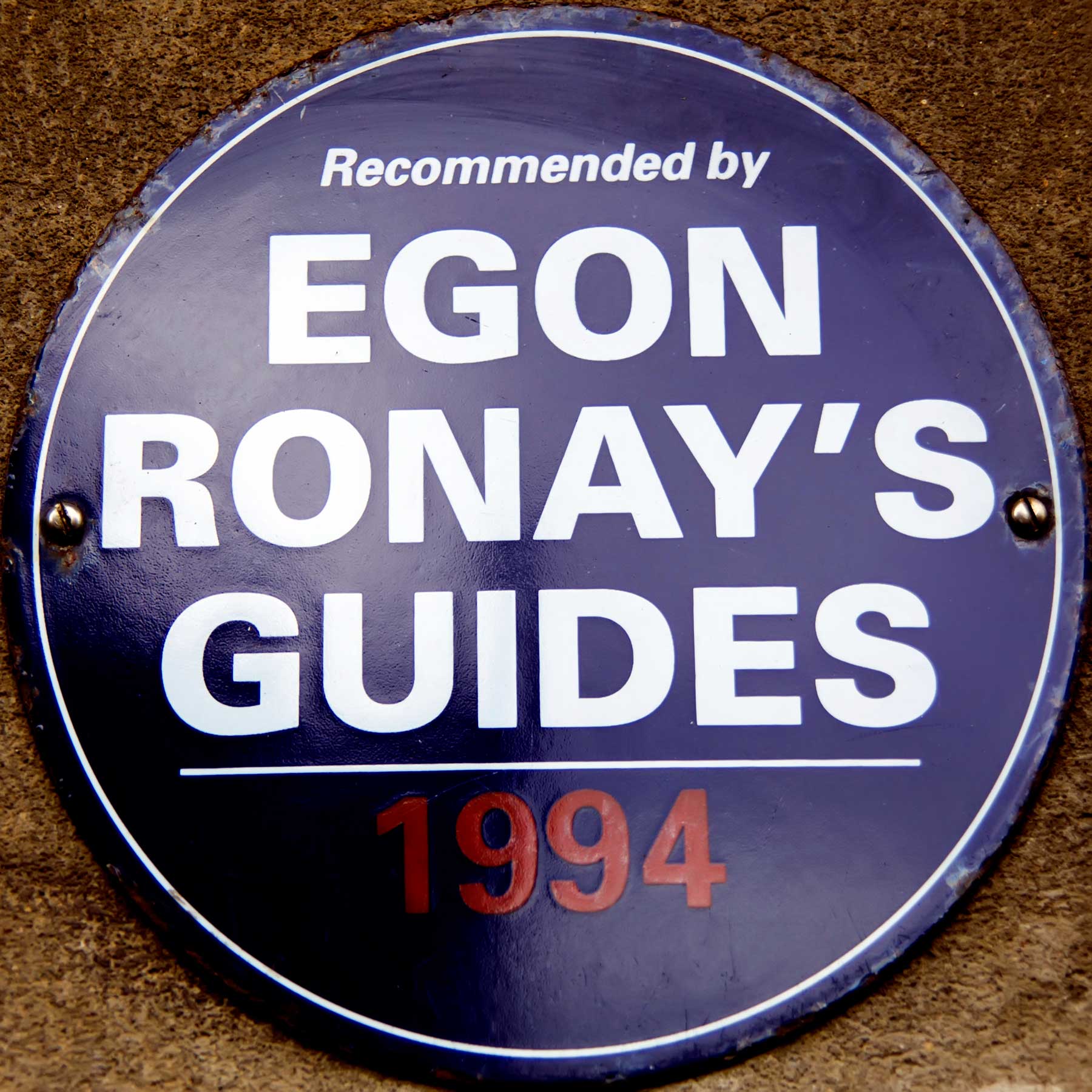 Ronay returned to the scene in 2004. He worked out of an office in Knightsbridge, London, behind Harrods. By many reports, he was still an elegantly dressed man, with high standards in personal appearance.

He faced a crowded market, and many of the flash celebrity chefs politely dismissed him as an old man and a spent force. Others reckoned that his tongue was still one to be reckoned with.

Ronay had no patience for the innovation then starting of untrained people being invited to post restaurant reviews on the web. He said, “It is of no greater use than someone venturing an opinion as you wait in the queue at the supermarket.”

In 2005, he received a Lifetime Achievement Award from the Carlton London Restaurant Awards. He also raised a minor stir in the same year by praising the quality of restaurants in Scotland that had started to open.

He died on 12th June 2010 in Yattendon, Berkshire. He is buried in the St Peter and St Paul Churchyard churchyard there. His tombstone reads, “Egon Ronay 1915 – 2010.” A much missed loving Husband and Father who dedicated his life to culinary perfection.” [1]Hufford, Bob. Egon Ronay. Accessed August 2019 at
https://www.findagrave.com/memorial/53616445/egon-ronay

“It sometimes looks more like hubris when the result arrives on your plate and you rush back to the menu in order to discover precisely what it was that you ordered.” — Egon Ronay on “testosterone-driven cooking” by celebrity chefs.

“Sir, I have been accused of lese-majesté in charging the Michelin Guide with chauvinism in its approach to British catering. But my attitude is all the more sustained in reading the interview given by the Michelin chief inspector to Miss Ann Morrow in The Times of March 23. As an example, he maligns French chefs in Britain by saying they would not leave France if they were any good. This is a slight on chefs Dumas of the Connaught, Virot of the Savoy Grill, Lefevre of the Midland, Manchester, Cottet of Gleneagles, among others — let alone Soyer of the Reform Club, Escoffier of the Carlton, Latry and Virlogeux of the Savoy, Boulestin and many more who must be turning in their graves. Yours faithfully, Egon Ronay, Egon Ronay Organisation, Queen’s House, Leicester Square.” —Letter to the Editor. The Times, London. 27 March 1974. Page 17.

“It won’t be many years before food in this country [the UK] is better than it is in France. But there is an annoying new trend for over-complicated menus that are anything but customer friendly. They read like recipes, with the result that you choose halibut and then fail to find it on your plate. It’s even hard to get a decent dessert: instead, you get a sculpture. It’s ridiculous.” — Egon Ronay as quoted by Rachel Cooke in “He’s had more hot dinners”. Manchester: The Observer. 7 December 2003.

“I’m not particularly bothered about being in his guide. I mean, who is Egon Ronay? Doesn’t he normally write about pubs, inns and service stations?” — Gordon Ramsay in Rachel Cooke. “He’s had more hot dinners”. Manchester: The Observer. 7 December 2003.

“Gastronomically speaking, food has no nationality; it is either good or it isn’t.” — Egon Ronay. Real Food Pioneer: Egon Ronay. London: The Times. 14 August 2007.

Kirby, Terry. Ronay, the restaurant critic who pays his way, is back after a seven-year break between courses. London: The Independent. 4 October 2004.

Prince, Dominic. Bring me the head of Egon Ronay. London: The Independent. 26 February 2005.