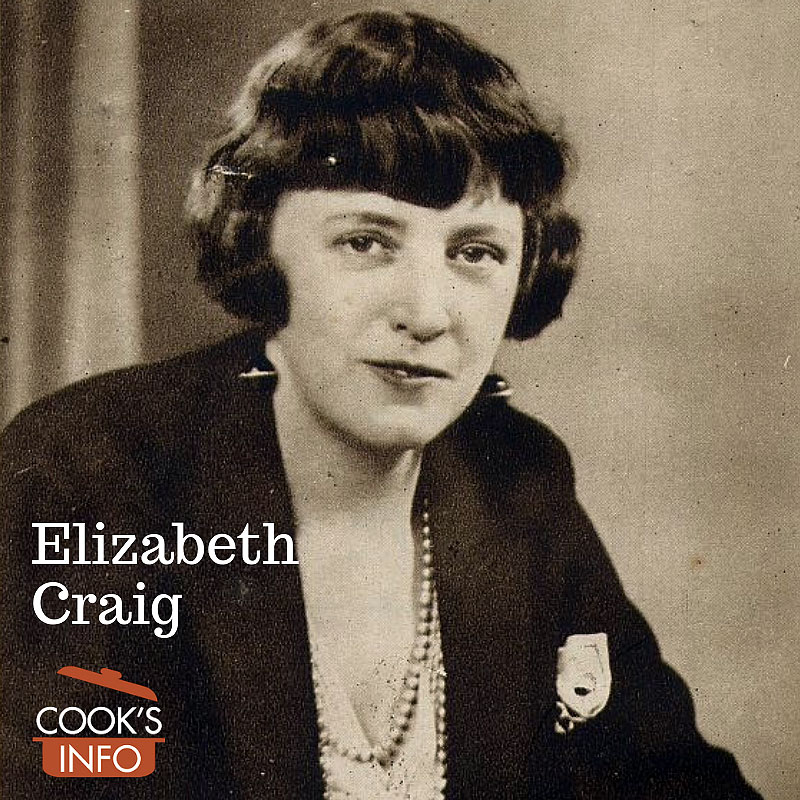 Elizabeth Josephine Craig (16 February 1883 – 7 June 1980) wrote over 40 books. Most were cook books but some were household management books in the “Enquire Within” series.

She was born in West Lothian, Scotland to John Mitchell Craig and Catherine Anne Craig. Her father was a Presbyterian minister for the Free Church of Scotland. The couple would have eight children in all. Elizabeth was raised in the church manse in Memus, Kirriemuir, Scotland. She went on to live most of her life in England.

She studied journalism in Dundee, Scotland.

At the end of 1919, she married American war correspondent and broadcaster Arthur Mann in London, at St Martin in the Fields Church. Despite being married, she had all her writing published under her maiden name.

The world of writing

One of her very first pieces, in 1920, would appear at first blush to be little more than a society column, owing to the seemingly relentless mention of big society names, both British and American, in London. What she manages to do, though, to make it relevant for the working or middle class housewife readers is coax out of all of them a recipe for one of their favourite, simple dishes. And she adds two practical notes at the end of the piece: inexpensive towel runners for tables, and the type of paint to use for kitchen walls.

“The Countess of Oxford and Asquith, who never eats potatoes, has given me the following recipe for one of her favorite sole dishes: Flour filets of sole lightly, then fry till golden on both sides in a little hot butter. Now add a little cream and lemon juice and let them soak slowly into the filets over a gentle heat, then dish up, sprinkle with minced parsley and pour over them the juice from the pan. Garnish these filets of sole saute with soft roes fried gently in butter. Haddock or whiting are equally good cooked in the same way.” — Elizabeth Craig. Put on Bounteous Meals and Here’s Some Recipes: Lords and Ladies Fads in Foods and Here Is What to Expect When Dining With Famous Persons. London, July 17 1920

Her first piece entirely on cooking was published in 1920 in the Daily Express newspaper.

For Christmas 1924, she published a piece entitled, “Boar’s Head and Rough Puff Pastry In an Old-Time English Feast.” She advised on how to prepare and present a Boar’s Head, Old Mincemeat (with meat) vs modern mincemeat, a quick puff pastry she called “Rough Puff Pastry”, and a Pork with Apples dish. She gave context along with practical implementation.

In the 1930s, she was hired by the Phoenix Glassware company to help design and lend her name to their range of heat-proof glass cooking dishes.

She used the 1930s to establish herself as being able to give thrifty cooking advice, which would stand her in good stead for the rationing just ahead. A Canadian reporter noted:

“On a recipe trip to England, Elizabeth Craig gave us a demonstration of how delicious fish soup can be made in her testing kitchen in Lycrome, Bucks. Here famous dishes are concocted to tempt the palate of Kings and peasants. It is here Elizabeth Craig writes articles which set the housewives of England agog — and not long ago, printed a series of articles, showing that the English housewife wastes more food down the kitchen sink than would pay off the national debt. It is her job to show them how to economize — how to make up dishes which will be tasty as well as nutritious and her fame has spread far and wide over her soup dishes.” — “Pep up Fish Day.” In: Northern Gazette, Peace River, Alberta. 9 April 1937. Page 4.

When war came along at the end of the 1930s, Craig was ready with sensible advice and encouragement for home cooks:

“I’ll take no excuse for a want of variety in meals. ‘Keep out of the rut’ is a motto that should hang in every kitchen. Come along everybody. Let’s do our bit. Armed with wooden spoon, basin, and saucepan we’ll keep the pots boiling whatever happens.” — Craig’s introduction to “Cooking in Wartime”, 1941.

Reputedly, at the end of her life as she was in the hospital suffering from a broken hip, she heard talk of her publisher getting someone else to finish her final book. She proclaimed this “ridiculous”, had all her notes and files brought to her, and finished the book herself there in the hospital.

“I can’t very leave the subject of Scottish parties without mentioning Halloween. When I was in my teens, the games we played were more important than the fare. We used to sit cross-legged on the floor round black gypsy pots full of fluffy mashed potatoes and sup them with wooden spoons. There were charms embedded in the potatoes. If you came across a sixpence it guaranteed you wealth, if you found a ring you were the first to be married. The button ensured you single bliss, and so on. Then we used to ‘dook’ for apples in a tub of water and play forfeits, fortified by lemonade and cocoa and home-made biscuits. Sometimes we danced to the tinkle of a tinny piano. When I grew older the fare at Halloween parties became more elaborate – sandwiches, lobster and oyster patties, jellies, creams and trifles and claret cup, and dancing, consequences and forfeits passed the evening away.” — from Elizabeth Craig’s The Scottish Cookery Book, 1956.

“Taste of Green: The Art of Irish Cooking by Elizabeth Craig is a tasteful way to make mention of St. Patrick’s Day. Miss Craig, who has collected recipes from all over the world, has exploded the myth that Irish cooking is centred around the potato. Her favorite recipes originated in Ireland, handed down from generation to generation, while others have come from Irish exiles across the seas. The author concentrates on all aspects of cooking – fish, meat, game, desserts, preserves, candies, breads and Irish coffee.” — Lucy’s Green Ave. Boutique column. In: Altoona Mirror, Altoona, Pennsylvania. 15 March 1971. Page 24.

“Elizabeth Craig’s book, Collins Family Cookery, is also a large book containing over 4,500 recipes. It is a reprint of a 1957 edition so may already be familiar to some cooks, particularly those from Britain. It is very ‘English’ in its terminology (the stove is the ‘cooker’, pancakes are made on a ‘girdle’, and ingredients are mixed in a ‘basin'( and some of the recipes (bubble and squeak, Berkshire roly poly, potted hare and Lancashire pie) will stir the heart of anyone from England. There are also recipes for haggis, Irish stew and Welsh rarebit so any Britisher might feel at home with the book. In addition, there are recipes from many other parts of the world. I even found one for ‘prairie flapjacks’ but was disappointed to find it is a sweet square using rolled oats and brown sugar!” — Elspeth Walker. “Three collections of recipes.” Lethbridge, Alberta: The Lethbridge Herald. 24 June 1972. Page 5.

This web site generates income from affiliated links and ads at no cost to you to fund continued research · Information on this site is Copyright © 2022· Feel free to cite correctly, but copying whole pages for your website is content theft and will be DCMA'd.
Tagged With: British Food, Scottish Food