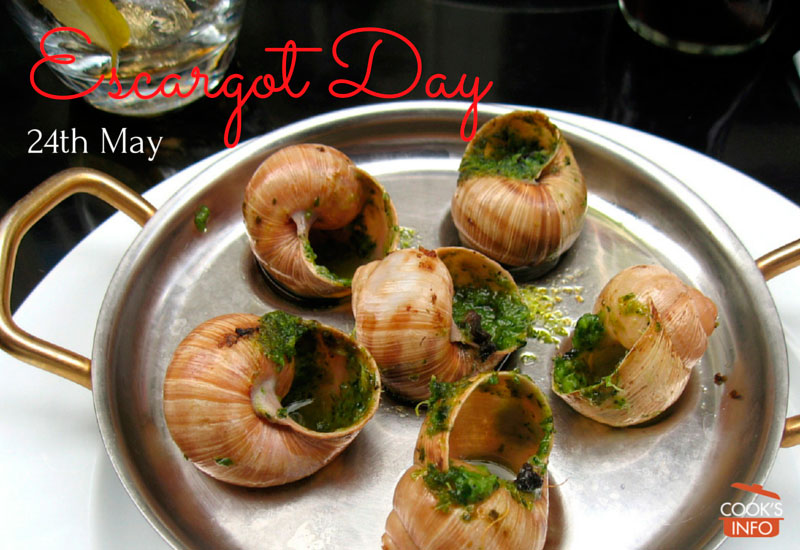 The 24th of May is Escargot Day.

Escargot had their heyday in the 1970s, when everyone ate them at restaurants with garlic butter and bought the Escargot dishes for home use (but couldn’t actually bring themselves to go the next step and buy the slimy little critters for use in their own kitchen.)

Mind you, as some food writers have observed, you could simmer golf balls in that sauce and they would taste good. [1]This was Jean Paré. Schultz, Judy. Jean Paré: An Appetite for Life. Edmonton, Alberta: Company’s Company Publishing Limited. 2006.

You may wish to finally try cooking up escargot in garlic sauce at home. You may even wish to hold a snail race before cooking up your meal; perhaps the winner gets set free in a neighbour’s garden.

No doubt many gardeners would happily supply the Escargot enthusiasts amongst us with a lifetime supply of all the snails they can swallow (though you’re best to give such offers a miss: like mushrooms, not all snails are considered good, or even safe, to eat.)

Many people will no doubt decide to give this entire day a miss. Some are so repulsed by the thought of “slimy snails” that they say it might as well be “National Eat-Your-Own-Snot Day.”

“When it comes to escargot, it can be hard to move beyond the old pop-cultural image of snail as ‘snob food’. Plus, for many newbies, there’s a primal knee-jerk repulsion to the animal itself or to the presentation that, when done badly, can look like boogers…. I realize that, for some, snails still represent a dividing line that they will not cross. It’s a shame. If this describes you, why not take the opportunity to try escargot this week? Come on, it won’t kill ya.” [2]Wilson, Jason. In praise of snails and foie gras. Philadelphia, Pennsylvania: Philadelphia Daily News. 24 May 2012. Page 19 – 23. Col. 1.

A big promoter of the day is the Café Rouge chain in Scotland and England. They have promoted it since at least 2004, featuring “Gratin d’escargots à l’ail” on their menus throughout May.

The earliest print mention of an “Escargot Day” in May that CooksInfo is aware of dates from 2001:

According to Jason Wilson, food columnist for the Philadelphia Daily News, the originator of Escargot day was a man named Doug Dussault:

“I began thinking about the cultural significance of snails this week, because Thursday [Ed: 24th May] is National Escargot Day, which will be marked by special menus at numerous restaurants in Philadelphia…. National Escargot Day was the brainchild of Doug ‘The Snailman’ Dussault, whose company Potironne is the prime importer of wild Burgundy snails from Henri Maire, considered by many to be the best snail purveyor in the world…” [ref]Wilson, Jason. In praise of snails and foie gras. Philadelphia, Pennsylvania: Philadelphia Daily News. 24 May 2012. Page 19 – 23. Col. 1. [/ref]

Foodepedia. Don’t be slow to try an Escargot at Cafe Rouge. 24 May 2010. Accessed August 2018 at http://www.foodepedia.co.uk/restaurant-news/2010/may/rouge_escargot.htm

This web site generates income from affiliated links and ads at no cost to you to fund continued research · Information on this site is Copyright © 2022· Feel free to cite correctly, but copying whole pages for your website is content theft and will be DCMA'd.
Tagged With: French Food, Snails