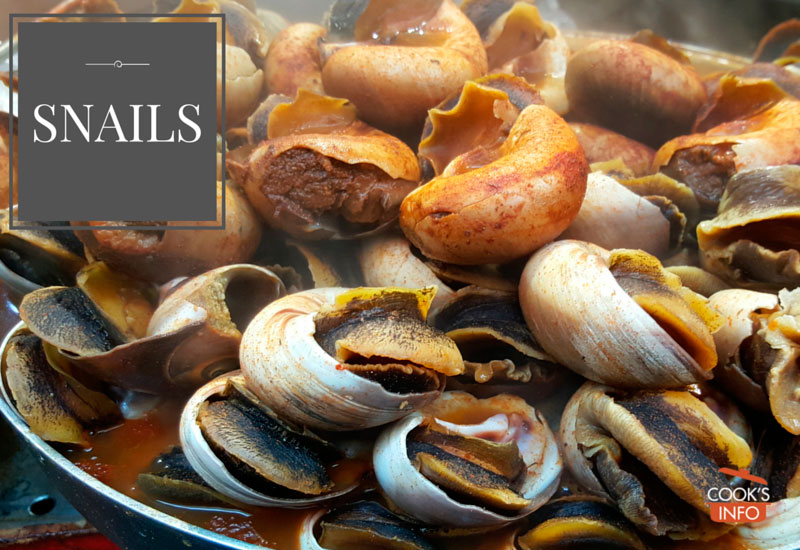 Snails that are eaten can be land snails, freshwater or saltwater snails.

Though not all snails are considered edible, some sources estimate there are 116 edible varieties.

Snails are hermaphroditic — that means each one can reproduce. There are no males or females.

They have no hearing, and very poor eyesight. They rely on smell and touch to find food. They like decaying vegetation.

There are two main species of edible snails: the ones that have “helix” in the scientific name (for their spiral, circular shells) and “achatine.” Helix snails are a European species.

The Helix aspersa variety is called the “petit-gris” in French (meaning “little grey.”) It is a very small snail that can live till they are 4 to 5 years old, but can be harvested when they are 7 to 8 months old. Twice a year, the snail will lay 50 to 75 eggs. The meat has a mild taste. This variety was introduced into America in 1854 by French immigrants. They have naturalized themselves very successfully in California, and in Texas since the 1930s.

One of the best varieties of snail is considered to be the one from Burgundy the French call “Très Gros” or “escargot de Bourgogne” (aka “Roman Snail”, or “Helix Pomatia.”) It doesn’t start reproducing until it’s 3 to 4 years old, and grows to be about 4 cm in size (1 3/4 inches). The snail should be allowed to get to be 3 to 4 years old before harvesting. They are fed grape leaves. Their shell is a dull, mottled yellowish brown, and their flesh has a rich taste. Despite their traditional association with Burgundy, 95% of these now actually come from places in Eastern Europe such as Russia and Poland.

The French are now importing achatina species snails from Indonesia, which grow 20 to 25 cm long (8 to 10 inches). Many of the “French” canned snails exported to North America are from those snails. The French also import snails from Greece, Turkey and even Nigeria. In France, commercially-processed snails by law must be steamed.

The curly part of the snail meat is called the “hepatopancreas.” It is considered the tastiest part.

Snails will taste of what they have eaten. If they are fed too much cabbage or garlic, they will taste of just that. Before harvesting, their digestive tracts need to be cleared out. Some do this by not feeding them for two weeks; others feed them cornmeal for a few days, and then don’t feed them at all for a few more days after that. 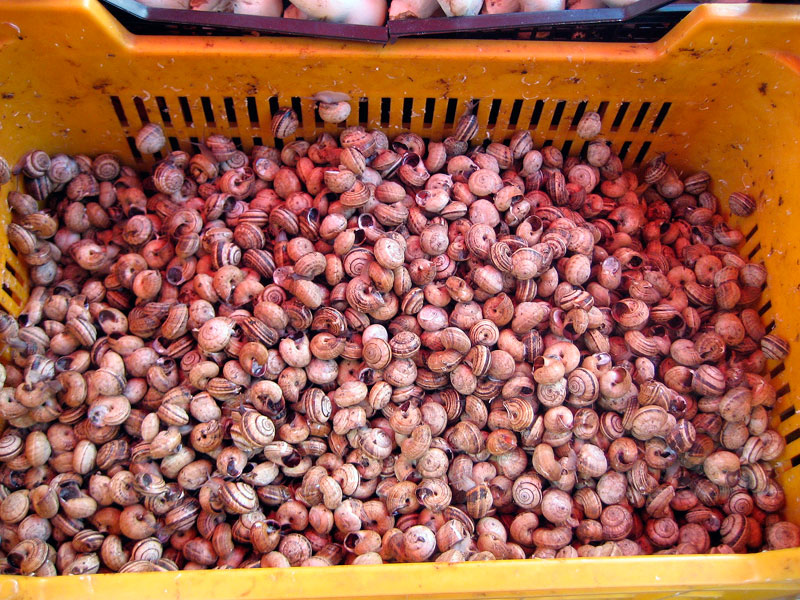 There is some question about the most ethical and humane way to process snails:

“Once they reach a plump-and-juicy 12 grams, snails are starved for up to a week in order to be purged of impurities, and dropped alive into boiling water – much like lobster.

Although they show a physical response to tissue damage, and food deprivation will almost certainly have a negative effect, research into whether they actually “feel”’ pain is still on-going, says Cambridge University Professor of animal welfare, Donald Broom.

So cooling them right down in the freezer to slow their nervous processes, and making sure that the water you drop them into is already boiling, is the best way to ensure they are killed quickly.” [1]Rivera, Lizzie. National Escargot Day: The Best Ways to Cook and Eat Snails. London: The Independent. 23 May 2016.

Snails can be sautéed for 5 minutes, or cooked low and slow via braising for 1 to 3 hours.

Snail and mushroom kabobs are good to make, because then picky eaters really have to work at telling which is a mushroom and which is a snail.

The Romans ate snails. They raised them in dedicated vineyard gardens, then used wine and bran, or milk, to get the snails so fat they couldn’t fit back into their shells.

The Romans even had a spoon they named after snails, a “cochlear”: it had a pointed end on its handling for prying snails out of their shells. This was useful in an era before forks were invented. 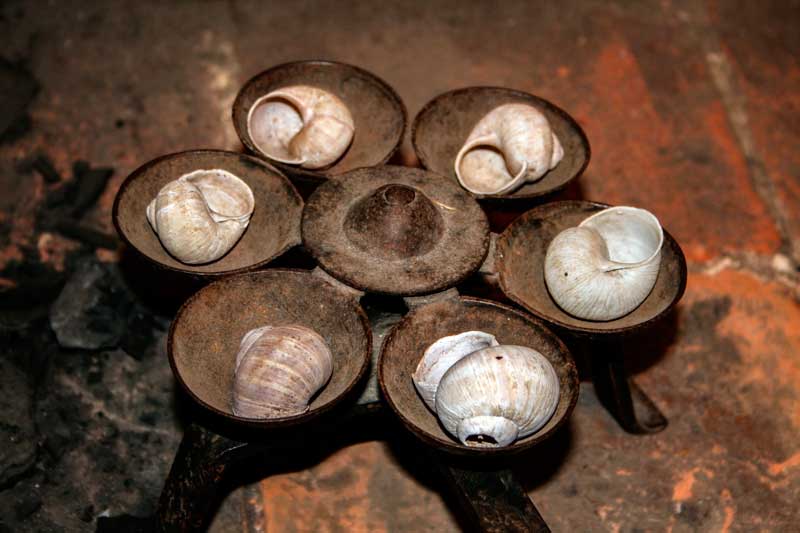 Roman dish for cooking and serving snails right at the table. You would put oil in the centre hole, light it, thus heating the dish, then cook the snails in the side pans. Diners could serve themselves. © Esa Riutta / pixabay.com / 2007 / CC0 1.0. Museum of Augusta Raurica, Switzerland.

“Both of us broke a bit of black barley bread, with chaff mixed in the kneading, twice a day, and had a few figs; sometimes, too, there would be a braised mushroom, and if there were a little dew we’d catch a snail, or we’d have some native vegetables or a crushed olive, and some wine to drink of dubious quality.” — Poliochus, in The Deipnosophistae. Athenaeus (Greek writer. c. 170 – c. 230 AD)

Canadian food writer Jean Paré said of escargot cooked in butter and garlic that anything cooked in that sauce, even a mouse, would taste good. 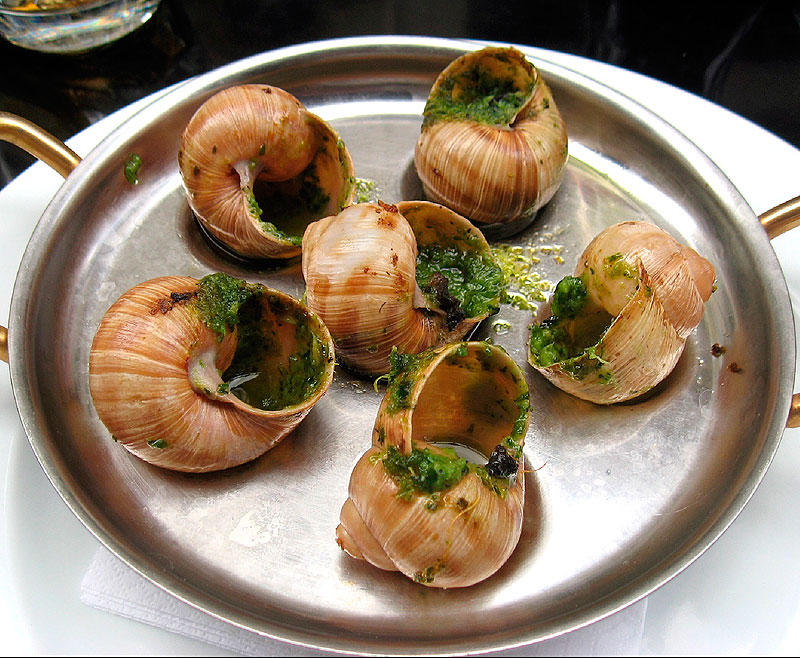 A snail expert is called a “malacologist.”

This web site generates income from affiliated links and ads at no cost to you to fund continued research · Information on this site is Copyright © 2022· Feel free to cite correctly, but copying whole pages for your website is content theft and will be DCMA'd.
Tagged With: Ancient Greece, French Food, Roman Food