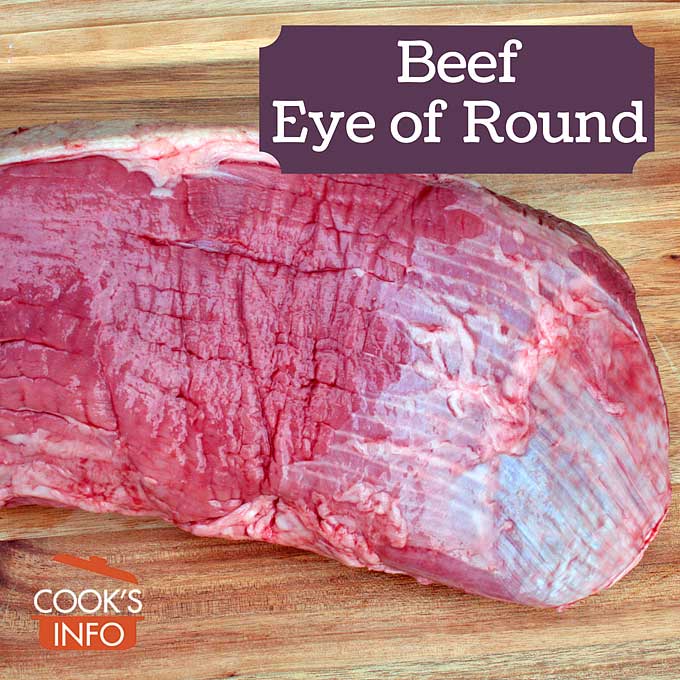 Eye of Round Roast. Whole, 3.5kg (7 ½ pounds) with side fat still on
© Denzil Green
Contents hide

An Eye of Round Roast is a boneless beef roast. A whole one can weigh up to 8 pounds (3 ½ kg), though butchers will often cut that in half for sale.

It is a lean cut of beef, with almost no marbling; any side fat is often trimmed away.

In fact, it’s such a “pure, beefy” looking cut, that at times it can look a lot like the extremely tender Tenderloin roast cut from the middle of a cow. In fact, though, an Eye of Round Roast is cut from the primal Round region at the hindmost end of a cow (see main entry for “Beef Round.”) The top and bottom (outside and inside) and heel (portion of the hip) Round areas have been trimmed away.

Knowing that it is cut from the Round region is of importance, because that twigs you into the fact that this roast is one of toughest cuts of beef that it’s possible to extract from a cow.

It needs to be cooked with proper techniques for it to tenderize it. One is as a pot roast, with low and slow moist cooking. The other is as an oven roast, but with a special three-step procedure (if you try to oven roast this cut directly as is, you will end up with shoe leather.)

Nevertheless, most people will concede that once the toughness issue has been dealt with, the flavour of an Eye of Round Roast is excellent — and far better than that from a Tenderloin.

This is our recommended method of cooking this cut, hands down. See here: Roasted Eye of Round Roast Recipe.

Eye of Round Roast as a pot roast.

Treat as a pot roast, and cook with long, slow, moist cooking to tenderize it. A slow cooker is ideal for this — 8 hours on low. Don’t try to rush it with the high setting — you can’t fool mother nature here. Brown the sides first in a skillet with some hot oil to develop flavour — about a minute per side. Make lots of gravy as the meat will be dry.

Eye of Round Roast in the pressure cooker

If the roast you are working with weighs over 4 ½ pounds (2 kg), cut it in half crosswise before beginning and just cook half in your standard-sized pressure cooker.

Brown the sides first in a skillet with some hot oil to develop flavour — about a minute per side. Rub roast with a clove of garlic (optional), and season sides with salt and pepper.

Put the roast in the pressure cooker. If you rubbed with garlic, toss the garlic clove in (along with up to 3 additional cloves, if desired.) Add a sliced onion, and four cups (1 litre) of beef broth or stock (vegetable stock or even just water flavoured with some Worcestershire Sauce will do in a pinch.)

Secure the lid on the pressure cooker, put on stove and turn on the burner; bring to 10 psi (pounds per square inch.) Let cook 12 minutes per pound (450g). Then remove from heat, but do not release pressure. Wait until the pressure has dissipated naturally and it is safe to open. 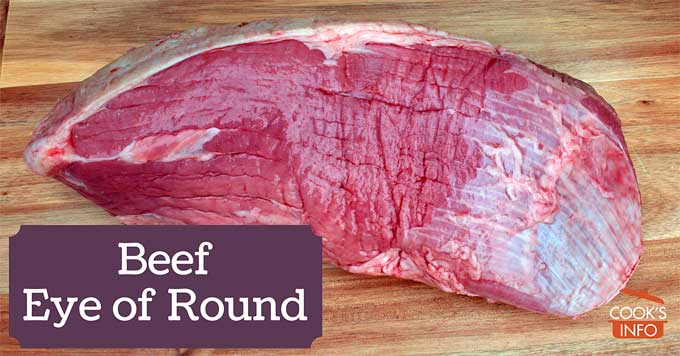 Beef Eye of Round
© Denzil Green

This web site generates income from affiliated links and ads at no cost to you to fund continued research · Information on this site is Copyright © 2023· Feel free to cite correctly, but copying whole pages for your website is content theft and will be DCMA'd.
Tagged With: Beef Roasts, Pot Roasts, Round Roasts