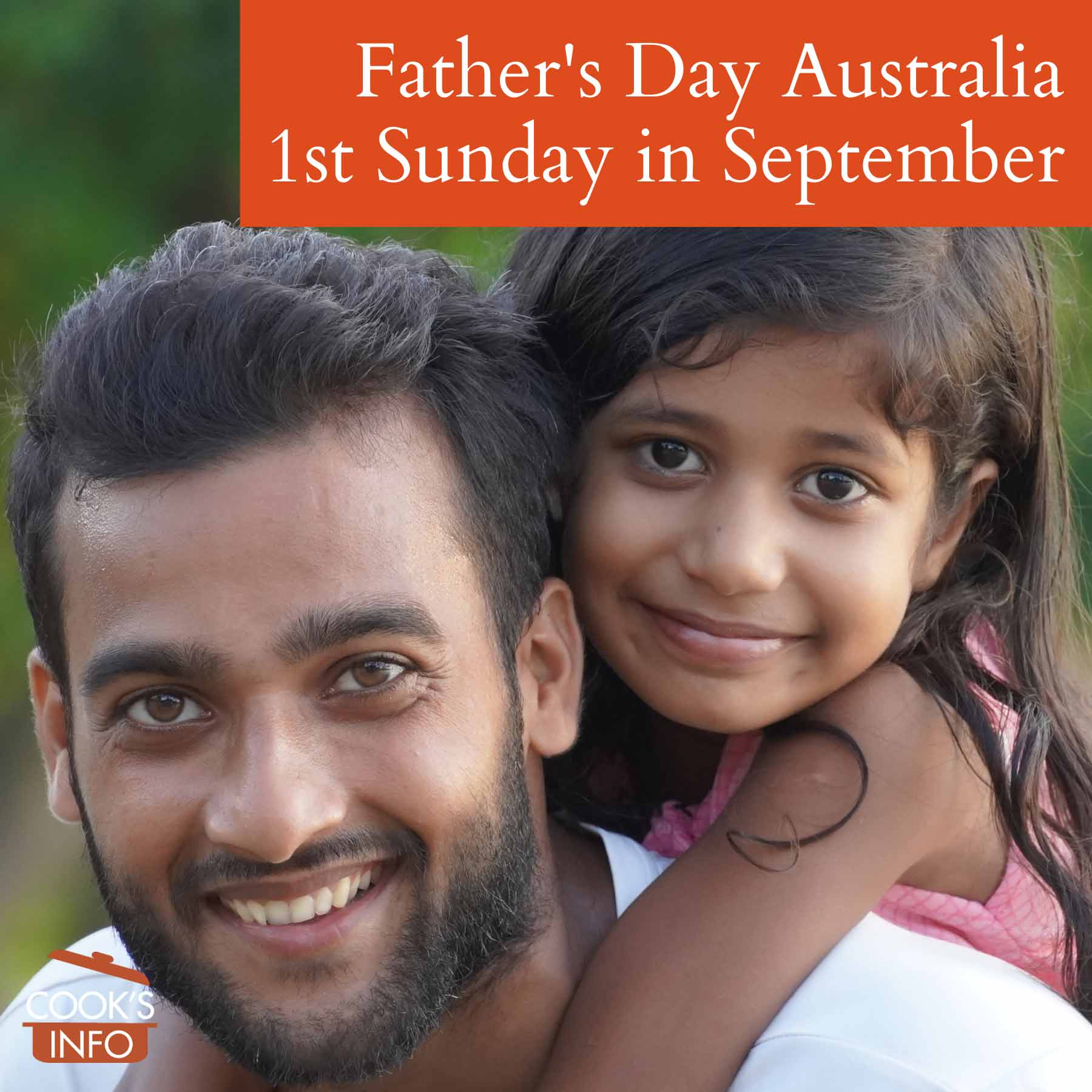 The first Sunday of September is Father’s Day in Australia, as well as in New Zealand, Fiji and Papua New Guinea.

It is a “day of note” rather than a public holiday but as it is a Sunday, many people will have the day off work anyway.

At this time of year in Australia, spring is just starting, so the September timing lends itself well to sporting and summer gardening gifts for fathers.

Activities for the day

Activities centred around the day include:

Father’s Day gift stalls at public schools are a fixture of the Father’s Day season in Australia.

The stalls can be a fundraising opportunity for schools, typically for a specific cause. They offer inexpensive presents, with a typical price range of $2 to $10, for fathers, grandfathers, carers, and / or other role-models. Some students may make multiple purchases, e.g. both for father and grandfather.

Parents volunteer to help staff the stalls. Some crafty parents make gifts and donate them to the stalls to be sold. Other gifts may be purchased for resale. Some companies that make promotional gifts (such as engraved pens and mugs) specifically target these Father’s Day stalls with catalogues months ahead with bundle deals, special offers on shipping, etc.

In some schools, teachers are given an allotted time to bring their class to the room hosting the stalls, so that their students may do their shopping.

The advice seems to be to hold the stalls early in the day, before students whistle through all their pocket money at school canteens.

Children are sent home with notes the day before reminding the parents of the fundraising stall and thus (hint, hint), to send their child in with money for it the next day.

One possible reason that people will speculate about is that because Father’s Day in the northern hemisphere is in spring, it should be in spring in Australia, too, and that means September.

That argument is rather weak, though, as following that logic, Mother’s Day, Easter, and Christmas should be moved as well.

Another reason often heard is that the “first half of the year is already busy”, which seems a pretty weak reason as well, as it has never stopped other special days from being shoe-horned in whenever.

Australia picked up on the idea of a Father’s Day from Father’s Day in the United States, which started in June, 1910.

It slowly began appearing in various parts of Australia at various times of the year, though the Australian media pooh-poohed the idea.

In 1922, the Brompton Methodist Church in Adelaide, South Australia, announced it would be observing Father’s Day on the 18th of June that year, which was the third Sunday in June, making it the same as the American date:

“FATHER’S DAY: In addition to Mothers’ Day, Fathers’ Day, as an institution, has taken firm hold in various portions of the United States of America. Both of these institutions have drawn attention to the value of family life, and have deepened respect for mothers and fathers. Fathers’ Day will be celebrated in the Brompton Methodist Church to-morrow.” [2]Adelaide, Australia: The Advertiser. Saturday, 17 June 1922. Page 12, col. 5. Accessed August 2021 at https://trove.nla.gov.au/newspaper/article/49101631

In 1936, a mention in the Newcastle Sun said that Father’s Day would be observed on what was the first Sunday in September of that year, the 6th of September:

“FATHER’s DAY: A new day for the Calendar is “Father’s Day,” September 6. Mothers’ Day has become very popular, and maybe “Father’s Day” will. The colored flower for father is red. A special “Father’s Day” meeting for Newcastle has been arranged, and will be held Sunday, September 6, in the Newcastle Baptist Tabernacle at 4.30 p.m. The special speaker will be the well-known “broadcast” preacher, Pastor Weller, of Sydney, who will speak on //THE FOUR-SQUARE MAN// … The meeting will be open to men of all denominations, and all fathers are requested to invite their sons. The Tabernacle is not far from the Newcastle Town Hall.” [3] News from the churches. Newcastle, NSW, Australia: The Newcastle Sun. Friday, 4 September 1936. Page 10, col. 6. Accessed August 2021 at https://trove.nla.gov.au/newspaper/article/166557344#

Later, as the years went by, various organizations and entities said they were observing it in August, or November. [4]Young, Anne. Fathers’ Day: first Sunday in September in Australia. 13 August 2013. Accessed August 2021 at https://anneyoungau.wordpress.com/category/fathers-day/

In 1958, an unnamed columnist for the Western Herald of Bourke, New South Wales, proclaimed out of the blue that “the first Sunday in September (Sept. 7, 1958) has now officially been designated as Father’s Day throughout the Commonwealth.” [5]Father’s Day — Founded by a Mother. Bourke, NSW: Western Herald. Friday, 5th September 1958. Page 2, col. 4. Accessed August 2021 at https://trove.nla.gov.au/newspaper/article/103991524#

The columnist neglects to mention, however, who exactly officially proclaimed it, and when. The lack of this information is unfortunate, as it might have given some clue to any background thinking behind advocating for September as opposed to June.

A 1964 piece in “The Biz” newspaper of Fairfield, New South Wales, says that a Father’s Day Council of Australia has been formed, and that the day is the first Sunday in September. It also says it’s the 29th year that the day has been observed in Australia, which is inaccurate. [6]Father’s Day in 29th Year. Fairfield, NSW: The Biz. Wednesday, 2 September 1964. Page 6, col. 2. Accessed August 2021 at https://trove.nla.gov.au/newspaper/page/21542258#

Canales, Sarah Basford. Why Australia Celebrates Father’s Day Much Later Than the Rest of the World. Life Hacker. 23 June 2020. Accessed August 2021 at https://www.lifehacker.com.au/2020/06/why-australia-celebrates-fathers-day-much-later-than-the-rest-of-the-world/

Wolfe, Natalie. Why didn’t we celebrate Father’s Day earlier this month with the US and the UK? Adelaide, South Australia: News.com.au. 1 July 2017. Accessed August 2021 at https://www.news.com.au/lifestyle/parenting/kids/why-didnt-we-celebrate-fathers-day-earlier-this-month-with-the-us-and-the-uk/news-story/ce674631ac4211d795c06b4a36da91f7