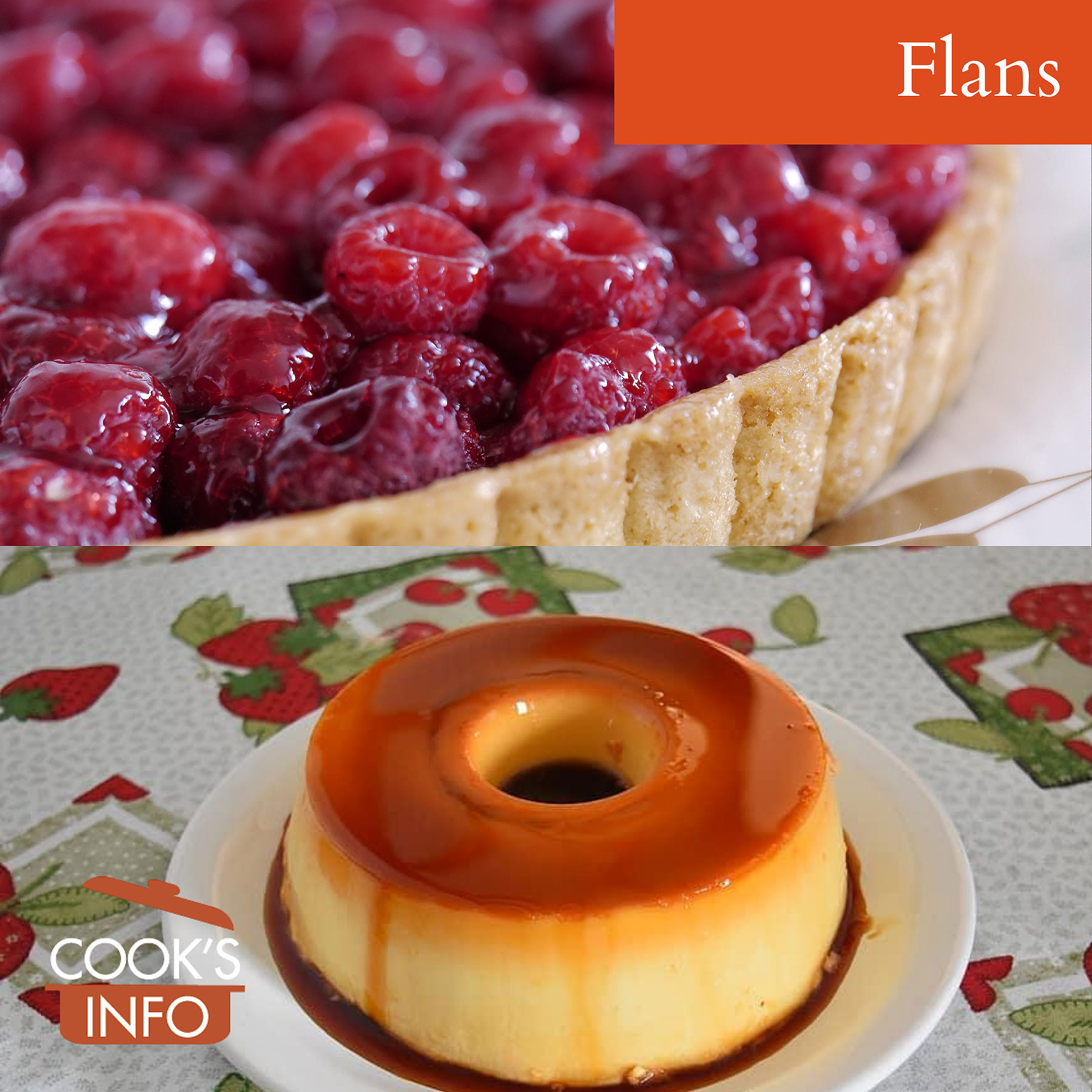 The word flan can mean many things in the culinary world. It can be a dessert with a low, flat pastry base made of flour (either short crust or sponge), or, it can be a large baked sweet custard. Or, it can be a savoury dish.

“Flan, a term with two meanings. The one most familiar in Britain… is ‘An open pastry or sponge case containing a sweet or savoury filling.’ A typical flan of this sort is round, with shortcrust pastry. It is either baked blind before the hot or cold filling is added, or baked with the filling. The filling, especially if it is a sweet one, may incorporate custard. In France the term flan carries the first meaning described above, but often has the second meaning: a sweet custard which is baked in a mould in the oven until set… the second meaning is the one which is used in Spain and Portugal, where flan is a standard dessert… This second and very widespread meaning is the one which correspond to the etymology of the term. The Old French flaon, derived from the Latin flado, had as its principal meaning ‘a custard’. [1]Davidson, Alan. The Penguin Companion to Food. London: The Penguin Group, 2002. Page 365.

“Tarts and flans: These are usually made of short crust pastry, but flaky pastry is sometimes used for for apple and rhubarb tarts. Flans are composed of fruit with custard cream, confectioner’s cream or fresh cream. They are more elaborate than tarts which use only fruit.” [2]Pellaprat, H.P. Modern French Culinary Art. London: Virtue & Company Ltd. 1969. Page 846.

“Flan: an open tart filled with fruit, a cream, or savoury mixture. A flan may be served as a hot entree or as a dessert. The word comes from the Old French flaon, from the Latin flado (a flat cake). Flans have been in existence for centuries. They are mentioned in the works of the Latin poet Fortunatus (530 – 609 AD), and featured in medieval cookery — Taillevent gave numerous recipes for flans. The word flan in France and Spain is also used for an egg custard, often caramel-flavoured, that is made in a mould and then turned out and served cold.” [3]Lang, Jennifer Harvey, ed. Larousse Gastronomique. New York: Crown Publishers. English edition 1988. Page 445.

Savoury flans found in the English speaking world are like the Spanish versions, being essentially a large baked custard, but will be more solid and contain vegetables or meat, and essentially be a crust-less quiche. 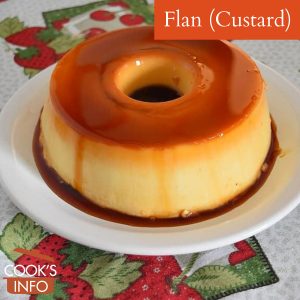 Flan, as made in Spain and other Spanish-speaking countries is a milk-based sweet custard topped with caramel sauce. This is sometimes referred to by English speakers as a "leche flan" ("milk flan"). 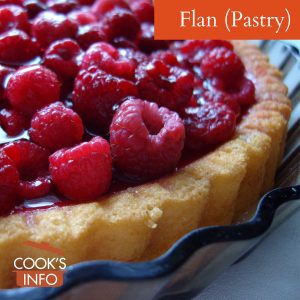 A pastry-style flan is a low, flat dessert. It can have as its base either short crust pastry, or a flat, shallow sponge cake.