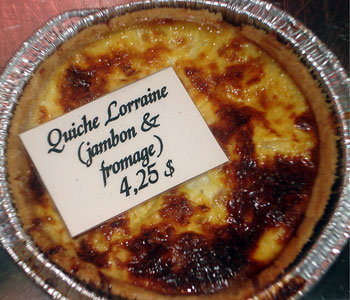 Contents hide
A Quiche is a French, open-faced pie baked in a pie shell with a savoury custard filling, often with flavouring ingredients besides.

It can be served for any meal, including breakfast (though the French wouldn’t serve it for breakfast.)

It is usually made in a round shallow dish with straight but fluted sides. Many people buy special dishes, often made out of glazed pottery, aiming for a French country look for the dish. Most pans are 8 to 10 inches (20 to 25 cm) wide. Julia Child gives recipes for 8 inch (20 cm) pans; she suggests that when making an 8 inch (20 cm) recipe to go in a 10 inch (25 cm) pan, you should increase the ingredients in the recipe by ½.

The pastry is a shortcrust pastry. (There are now also crustless recipes, but those aren’t really quiche — they’re baked custard.) In the Bodensee area of Germany, bread dough is used as the crust.

Egg in the filling mixture helps give the custard body, though the more ingredients you have, the less egg you need to give body.

Any vegetables you add to it should be sautéed, steamed or microwaved first, with the exception of quick-cooking things such as tomato slices or asparagus tips. Meat definitely should be cooked first.

In the mind of an English-speaker, and that of many French-speakers outside Lorraine to boot, classic quiche, Quiche Lorraine style, is made with bacon and gruyère cheese, though the addition of any cheese is reputed to be a relatively modern addition. In fact, in Lorraine, no cheese is used in quiche, just thick “crème fraîche”, egg and smoky bacon, which technically is “quiche au lard”, and was called that originally. All rides on the quality of the cream. “Le reste”, say wild-eyed Lorrains defending their patrimoine “, c’est de la littérature!” (anything beyond those ingredients is fiction.) When cooked, they say, the filling should tremble, like a custard.

The Lorraine purists notwithstanding, many families in Lorraine do have the tradition of putting gruyère in their family’s quiche, and French cooking schools in France teach it with the addition of gruyère.

Quiche Alsacienne is with onions.

You can add anything else you want to the filling mixture, but generally it’s considered good zen to use no more than 3 additional ingredients.

Allow to rest 10 minutes before serving.

Quiche has nothing to do with the indigenous people in central and northern Guatemala, whose tribe’s name is “Quiche” (pronounced KEE-chay.)

Lorraine has actually been under German rule for most of its history: counting from 0 AD, it has had 4 centuries of Roman rule, 1400 years of German rule and only 300 years (as of the 21st century) of French rule. The German name for Lorraine is “Lothringen.”

A Quiche was served at the coronation of Henry IV on 13 October 1399. It was called in English back then a “doucetye”, (“douce” meaning “sweet” in French.) This Quiche served was what we would recognize as a quiche, but it had honey and saffron added to it in the Middle Ages style of blending sweet and savoury.

Quiche used to be made with bread dough for the crust. In some regions of Germany, such as the Bodensee area, it is still made with a bread dough crust: pastry dough is looked down on by purists there.

The term Quiche first appeared in print in France at the start of the 1800s.

Quiche hit North America at the end of the 1970s, and ruled the 1980s, but it had been mentioned already in the 1931 and 1951 editions of the “Joy of Cooking”, and recipes for it (including pronunciation) were appearing in American newspapers by the mid-1950s.

The word “Quiche” comes from the German word “Kuchen.” It is Pronounced “keesh”.

It is reputed to come from the German word for cake in general, “Küchen”, but Germans now call it “Quiche”, unless it’s Speckkuchen or Zwiebelkuchen.

In Nancy, Lorraine (Nanzig in German), Quiche is called “feouse.”