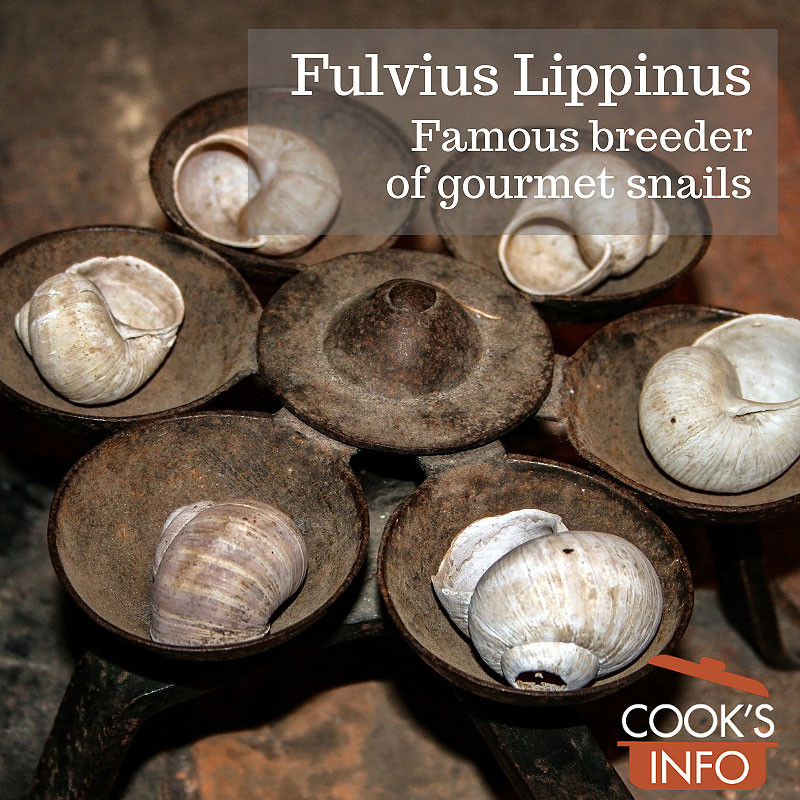 Quintus Fulvius Lippinus (aka Fulvius Hirpinus) was a Roman who lived around the middle of the first century BC. He went down in culinary history for his development of certain farming methods, particularly his method of farming and fattening edible water snails.

He lived in the formerly Estruscan areas of Italy: “It is reported that Quintus Fulvius Lippinus has a preserve in the vicinity of Tarquinii of forty iugera…. and an even larger one near Statonia, and some in other places.” [1]Marcus Terentius Varro. On Agriculture. 3.12.1.

He fed the snails a special feed that he developed himself, based on wine must and flour. All the snails grew very large on the diet: Pliny the historian maintained that some of Fulvius Lippinus’ snails grew so large, that their shells could hold 20 pints (10 litres) of liquid. [Ed: almost certainly an exaggeration.] 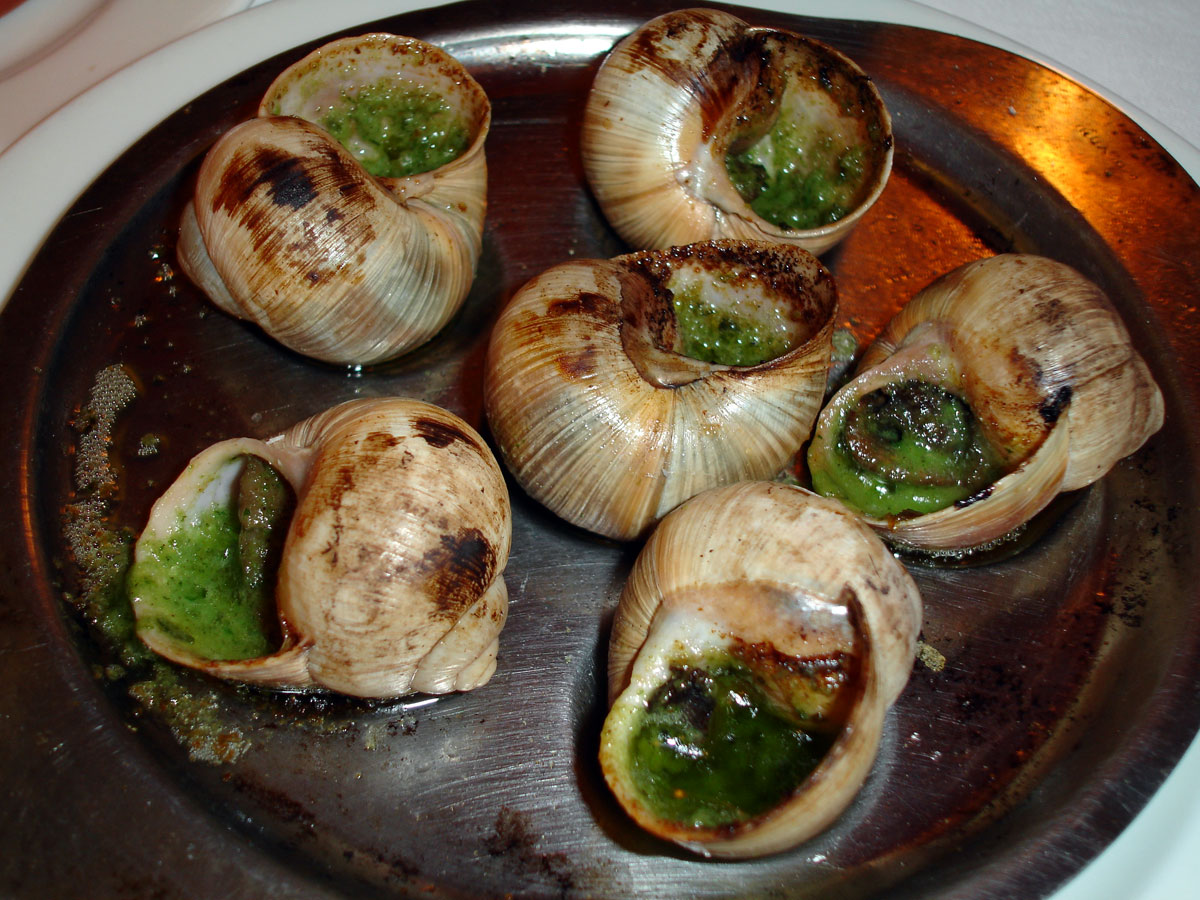 “Fulvius Lippinus was the first person of Roman nationality who invented preserves for wild pigs and the other kinds of game: he introduced keeping wild animals in the district of Tarquinii; and he did not long lack imitators, Lucius Lucullus and Quintus Hortensius.” [3]Pliny the Elder. Natural History. 8.78.2.

Nothing else of him is known.

Pliny the Elder recorded the snail raising in his natural history: 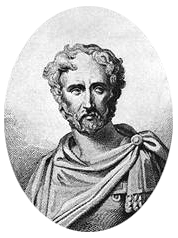 “Fulvius Lupinus first formed preserves for sea-snails, in the territory of Tarquinii, shortly before the civil war between Cæsar and Pompeius Magnus. He also carefully distinguished them by their several species, separating them from one another. The white ones were those that are produced in the district of Reate; those of Illyria were remarkable for the largeness of their size; while those from Africa were the most prolific; those, however, from the Promontory of the Sun were the most esteemed of all. For the purpose, also, of fattening them, he invented a mixture of boiled wine, spelt-meal, and other substances; so that fattened periwinkles even became quite an object of gastronomy; and the art of breeding them was brought to such a pitch of perfection, that the shell of a single animal would hold as much as eighty quadrantes. This we learn from M. Varro.” — Pliny the Elder. Natural History. Book 9. Chapter 82. 173 – 174.

Marcus Varro wrote this in his “Roman Farm Management”: 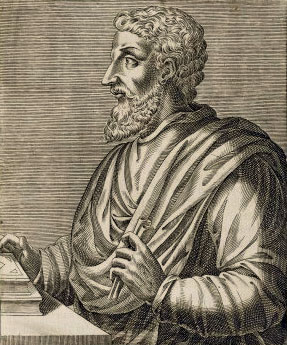 “And turning to Merula, Axius continued: “Appius has lightened your task, my dear Merula, so far as concerns the matter of game, and briefly the second act of our drama may be brought to an end, for I do not seek to learn any thing about snails and dormice, which is all that is left on the programme, for there can be no great trouble in keeping them.”

“It is not so simple as you seem to think, my dear Axius,” replied Merula, “for a place suitable for keeping snails I must be not only in the open air but entirely surrounded by water, otherwise you will be kept running not only after the children but also the parents which you have supplied for breeding.”

“In other words,” said I, “they must be enclosed by water to save the maintenance of a slave catcher.”

“A place which is not baked by the sun and on which the dew remains is preferable,” continued Merula. “If the place you use for your snails is not supplied with dew naturally, as often is the case in sunny situations, and there is no available shady recess, such as is found under rocks or hills whose feet are laved by a lake or a stream, then you must supply dew artificially. This may be done by leading into the snailery a pipe on the end of which is fixed a rose nozzle, through which water is forced against a rock so that it scatters in spray. The problem of feeding snails is small, for they supply themselves without help, finding what they require as they creep over the level ground and also while clinging to the sides of a wall, if no running water prevents their access to it. On the hucksters’ stands they keep alive a long time, as it were chewing their own cud, all that is done for them being to supply a few laurel leaves and scatter a little bran over them: so a cook never knows whether he is cooking them alive or dead.

“There are many kinds of snails, such as the small white ones, which come from Reate: the large variety which are imported from Illyricum, and the medium size which come from Africa: but they vary in size in certain localities of each of those countries. Thus, there is found in Africa a variety which are called “solitannae” of so great size that their shells will hold ten quarts: and so in the other countries I have named they are found together of all sizes. They produce an innumerable progeny, which at first are very small and soft but develop their hard shell with time. If you have large islands in the enclosure you may expect a rich haul from your snails. Snails are fattened by placing them in a jar smeared with boiled must and corn meal, on which they feed, and pierced with holes to admit the air, but they are naturally hardy.” — Marcus Terentius Varro. Roman Farm Management (“De Agri Rustica”). Book III. 14.

This web site generates income from affiliated links and ads at no cost to you to fund continued research · Information on this site is Copyright © 2023· Feel free to cite correctly, but copying whole pages for your website is content theft and will be DCMA'd.
Tagged With: Roman Food, Snails